Four years after marrying the leader of the neo-Nazi National Socialist Movement Joanna Schoep is getting divorced and has a few things to say about her husband.

Joanna Schoep (pronounced SCOOP) married the “commander” of the National Socialist Movement (NSM) in March 2008, after the two met on a conservative online message board. Jeff Schoep, whose NSM is now the largest neo-Nazi organization in America with 57 chapters in 39 states, moved in early 2007 from Minnesota, where the NSM had been headquartered for decades, to Detroit to move in with Joanna. They lived there together until December 2011, when they split acrimoniously — she had recently been through breast cancer treatments and discovered he was having a relationship with another woman. The couple are now going through divorce proceedings. Early this year, Joanna, 36, decided to speak to the Intelligence Report and describe her life with Schoep, who has five children. She explained how this committed anti-Semite privately accepted her non-white ancestry and that of her 17-year-old daughter, who is part African-American, but kept his new family’s racial background — anathema to neo-Nazis — secret from his followers in the NSM. Though publicly a believer in the NSM’s racist ideology, Schoep was not overtly racist to their minority neighbors or Joanna’s non-white friends, she said. He was instead mostly a raging anti-Semite, who directed his vitriol at “the Jews.” In Joanna’s view, Schoep isn’t serious about the NSM and its politics. Rather, she describes the group as Schoep’s personal piggy bank, where he wields total control over finances. She said she has come to see NSM as a cult-like organization where all power is centralized in one man’s hands, and its ranks are filled with uncritical followers who believe just about anything he has to say. 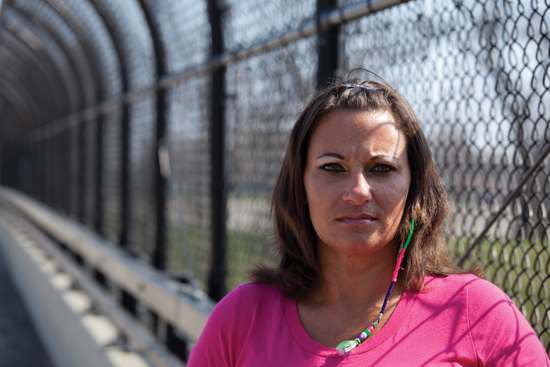 I met him through a website, a Myspace-like conservative gathering place. That was back in 2007. We started talking, just normal talk. We would discuss school, family, things like that. We hit it off and he ended up moving out here to be with me. At the time he was living in Hutchison, Minn., with the mother of some of his children, Angela. I liked him because he told me that even though they weren’t together any more, he had stayed in Minnesota for his kids. At the time, he seemed like a good dad. So Jeff moved in with me. We ended up getting married about 90 days after we got together.

Did you know Jeff was active in NSM?

I really didn’t understand what NSM was, meaning a neo-Nazi organization. I know I sound really silly, but honestly I had no idea. I just automatically assumed that it was a conservative group. But the more I got involved, when Jeff moved out here and came into my life, I figured out, wow, this is weird and scary.

He was great at first. He was normal and it seemed like we had a good relationship. But then he would change. It was like living with two different people. Like I was living with the character Jekyll and Hyde. He would be nice and all of a sudden he would dive off the deep end and get angry over the silliest stuff.

For example, if I came home late from work, even just 15 minutes, he would sit there and question me for hours on end. And I didn’t understand it. I had to walk on eggshells around him because I never knew what I would do or say that would set him off. He really had two different personalities.

Did you have any tension over racial issues, especially when it came to your daughter?

No, he knew when he moved out here that I had a half-black daughter. She lived with us for a while, and then she moved in with her father, who was more permissive about computer use and other things. Jeff was never nasty to my daughter. He always treated her kindly.

That’s amazing, isn’t it, given his neo-Nazi and racist views?

Yes, and also because I’m a quarter Arab-American. My dad is part Syrian and my grandfather was an Arab. And Jeff knew all of this. The only time we had problems was when Jeff would complain about my youngest daughter wanting to have friends of different races—I live in a very diverse neighborhood. He didn’t want her to do that, but I let her play with whomever she wanted. He always said he cared about me and that I was beautiful. Nothing else supposedly mattered.

Did Jeff keep your daughter’s background hidden from the NSM?

Totally. He denies it to this day, says I’m making it up. But I have pictures of him at a picnic with my daughter. He tells people I’m this computer whiz who can Photoshop anything and that I faked the picture. It is just shocking to me how gullible his followers are.

He may have denied it all, but lately, I’ve had NSM members contact me through Facebook and ask me about my daughter. There is a lot of gossip on the Web about me and my kids, too. 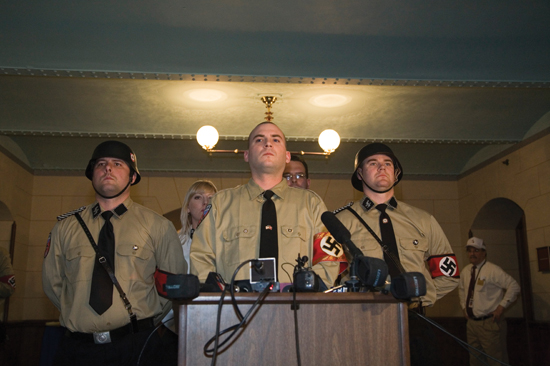 Jeff Schoep likes to dress up in Nazi uniforms, but his latest wife says he didn't seem to have a problem with black people, including her own mixed-race daughter.

It wasn’t because of his family. His mom and dad are wonderful people, they really are. In fact, when I came down with breast cancer, Jeff’s parents helped us financially. They don’t want him involved in this. His parents don’t like discussing it and wish he would quit.

What did he tell you about his beliefs?

I think he really, truly, doesn’t believe in neo-Nazism and that he’s just doing all of this to boost his ego, gain a Jim Jones-type of following and make some money. Or maybe he just likes to lie to people. I don’t know and it is strange.

I know he’s in it for the money; NSM is his only income. I feel like he doesn’t care much about race because I have a lot of friends of different races and our neighbors were black. He seemed to get along with them all just fine. His anti-Semitism was a different issue. He may not have cared about race, but he was definitely passionate about how awful he thought “the Jews” were.

What do you mean?

He blames Jews for everything. For the bad economy, smut on TV, you name it. He is a serious anti-Semite.

Does he have a job?

His job is basically sticking hate music and other CDs inside envelopes and then mailing them off. He runs the NSM’s record label, NSM Records. That’s what pays his bills. And it seemed more orders came from overseas than from the United States. He recently put up a new website on Amazon called Tyr Productions where he sells the same things that he is selling on NSM records.

He also lives off NSM dues and spends a lot of time trying to get people to send in as much money as possible. He liked it when people sent him cash because he would pocket that. None of the members know how much is coming in, because he keeps the books private. Many didn’t know he had Tyr Productions, where he just sells regular old NSM products on a different website.

And I have a job. So he was living off of me, too.

So did you have a lot NSM members coming to your house?

No one knew where we lived, but a lot of them met me. And they thought I was cool. Jeff never brought up my ethnicity or anything like that.

It’s a political cult, and the members are his followers. I think there are probably about 1,500 people in the group and many are from overseas, especially England. I consider them his “followers” because it is a cult, and a big one. Jeff’s main focus is getting as much money from people as possible. Even though he says it’s not.

And then he will turn around and say that he’s all about family, race and the nation. Obviously, that’s not true—he doesn’t even take care of his own kids living in Minnesota. He’s a hypocrite.

Did you go to NSM events?

I went to rallies with Jeff, and his followers just worship him. It was so cultish. No one can question Jeff. Everybody called him “commander.” No one could differ with him. Jeff said he wanted to fulfill Hitler’s dreams, and NSM members were with him lock, stock and barrel.

Can you describe a typical NSM follower?

Educated is not an adjective that I would use to describe them. Not many have a college education. There are a wide variety of ages. Most come to the group through the music and other products Jeff sells, some of which looks really cool, especially to young people. When customers talk to him, he will tell them about Jewish conspiracies and they end up totally brainwashed. That’s why I think it’s a cult. And Jeff is very charismatic. He is a very good speaker. He could earnestly sell a TV to a blind person. He has all these people completely and totally brainwashed.

Did he work closely with Jeff Hall, who was shot and killed last May by his 10-year-old son? What did he say about members with legal problems?

I met Jeff Hall [commander of the California chapter of NSM] a couple of times. He seemed to be a caring father. I saw him playing with his kids a few times, but that was about it.

Jeff talked about what happened. He seemed really upset by it. He said Jeff Hall was his best friend.

As to John Snyder [a sex offender and NSM Indiana leader who was on the run for six years because he wouldn’t register as one], we saw him on “America’s Most Wanted” in 2010. Jeff said that he was gross and it was going to cost NSM—people were probably going to stop buying merchandise because of that. And it was going to cause online gossip and rumors.

Did you ever try to get Jeff to quit NSM?

I begged him for a long time to give it up. I thought it was absurd and I asked him to go back to school and get a degree. He really likes history and I told him, why don’t you become a history teacher? I would beg him and beg him to quit but he wanted no part of that.

Has he done anything to harm you or your children?

He threatened me when I told him I was going to contact the FBI about the threats I’ve been getting from NSM members. He said that I have every reason to be scared of him, and he has told me that on numerous occasions.

I’m not afraid of him. Maybe I should be.