The arrests last spring of 14 American Front (AF) members in Florida capped a year of tumultuous infighting that began with the killing of the organization’s national leader, David Lynch. Now, an earlier AF national leader has returned and is working to lead Lynch’s former followers to a bizarre new ideology that mixes ideas of the radical right with those of the extreme left.

The arrests last spring of 14 American Front (AF) members in Florida capped a year of tumultuous infighting that began with the March 2011 killing of the organization’s national leader, David Lynch, in California. Now, with his Florida rivals sidelined by their legal troubles, an earlier AF national leader, James Porrazzo, has returned and is working to lead Lynch’s former followers to a bizarre new ideology that mixes ideas of the radical right with those of the extreme left.

Based in Boston, Porrazzo has started a new group, New Resistance, that espouses ideas Porrazzo describes as the “Fourth Position” — a modified version of the Third Position Porrazzo once plugged, an ideology that mixed advocacy of racial separatism with opposition to capitalism, communism and globalism. He has tried to bring former members of the AF, along with others, into this new formation.

The AF, which is one of the nation’s oldest racist skinhead groups, was founded in 1987 in San Francisco by Bob Heick. It soon made a name for itself on the American extreme right, affiliating with better-known racist groups like Tom Metzger’s White Aryan Resistance and winning notoriety for episodes like breaking Geraldo Rivera’s nose on live television and posing for photos in a spread on neo-Nazis published by Sassy magazine. Much of its ideology was standard for racist skin crews of the day, emphasizing hatred for blacks, Jews and other minorities.

Since then, it has gone through many ideological changes.

Porrazzo’s first run at leading the group came in the 1990s, and he continued as leader until 2002, when Lynch took over. Under Porrazzo, the AF moved to Arkansas and became one of the only American radical-right groups to espouse the Third Position, which is far more common among groups on the European racist right. The Third Position is a brand of neofascism that advocates racial separatism and a racially based socialism that is opposed to both capitalism and communism.

Porrazzo took Third Positionism seriously, even holding that opposition to capitalism was more important than white separatism. In an interview posted online in 1999, Porrazzo said: “We actually see more in common, ideologically, with groups like Nation of Islam, the New Black Panther Party or Aztlan than with the reactionaries like the Hollywood-style nazis or the Klan.” During this period, the AF also joined the Liaison Committee for Revolutionary Nationalism, an umbrella organization of Third Positionist groups.

But this political alignment, which included support for radical Islamists, ultimately did not win many popularity contests among white nationalist skinheads. “By the early 2000s,” the anti-racist Anti-Defamation League reports, “Porazzo had largely run the group into the ground and it was mostly inactive.”

Porrazzo’s approach to Islamists seems to have been the final cause of his undoing. The group promoted not only Hamas and Hezbollah, but even Al Qaeda’s Osama bin Laden. After 9/11, that kind of promotion “inspired some heavy state harassment and severely limited our ability to safely expand or organize,” according to Porrazzo. A Florida AF member says it was even rumored in the group that Porrazzo had connections to the Taliban. Troy Southgate, another white nationalist involved with Third Positionism, says that the 9/11 attacks angered the native New Yorkers in the AF, causing infighting and a descent into Islamophobia.

Soon afterward, Lynch said later, Porrazzo “disappeared without a trace,” and Lynch took over, moving AF headquarters back to California, where he lived in a suburb of Sacramento. Porrazzo was little heard from in the period between 2002 and Lynch’s 2011 death.

Lynch, who was more of a traditional racist skinhead, steered the AF back toward the ideas it had originally espoused. He made alliances with traditional neo-Nazi skinhead crews such as the Hammerskins, Volksfront and Blood & Honour, among others. His AF website said: “We will work with any pro-white organization with common ideals and goals, regardless of their public image. We place race first in all matters and do not participate in, condone, or support fratricidal in-fighting.”

Beginning around 2005, Lynch began to successfully lead the AF to a major resurgence, especially after 2007. Known in the movement as a charismatic man, he appeared to be successfully bringing the group back into national prominence.

But then, on March 2, 2011, an unknown attacker burst into Lynch’s home in Citrus Heights, Calif., and killed him in a murder that remains unsolved. Suddenly, the leadership of the AF was thrown open once again, and Porrazzo stepped in.

Immediately after the killing, Porrazzo (also spelled Porazzo) launched a struggle over the group’s leadership against Mark Faella and his wife Patty, who were heading up the increasingly powerful AF chapter based in St. Cloud, Fla. It appears to have been Porrazzo who commandeered the group’s website, sent an expulsion letter to both Faellas, and posted a YouTube video mocking the St. Cloud skinheads and questioning their sexual orientation. Eight months later, in October 2011, Porrazzo said he was dissolving the AF entirely and accused anyone still using the name of being “a liar and a counter-revolutionary.” At the same time, he announced that all former AF members were now part of his newly christened group, New Resistance.

Porrazzo later claimed he long had been deliberately trying to destroy the American Front in order to save it. Starting in 2009, he said, “a number of us entered their bandit grouping, disrupted it as best we could and reestablished AF as a National Revolutionary movement.” He was referring to his efforts to reverse Lynch’s ideological course and drag the AF back to its previous Third Positionism. 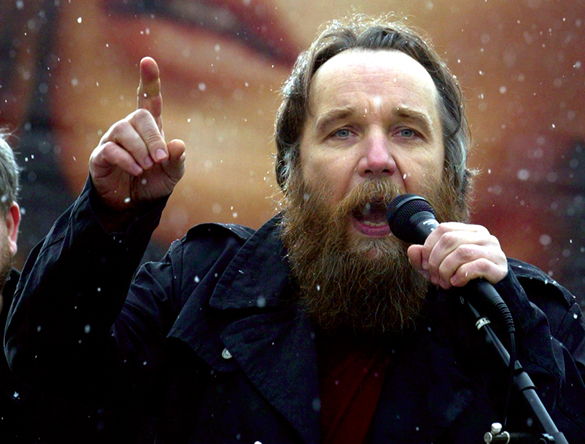 But in Florida, Mark Faella won support for his own leadership bid, and his crew began making big plans. According to an FBI informant, Faella convened a July 2011 national gathering and “patched in” 10 new members, including the FBI informant who would prove to be his undoing. The Florida outfit then moved on to allegedly threatening Porrazzo’s life, with one member even claiming to have gone to Boston with another skinhead in a failed attempt to kill Porrazzo. (When Porrazzo didn’t show up at a pre-arranged meeting, the pair reportedly assaulted the two people, a man and a woman, who had gone in Porrazzo’s place. For his part, Porrazzo said that he waited for the Floridians, but they failed to appear.)

The AF has always had a reputation for violence, whether under Heick, Porrazzo or Lynch. Members have gone to prison for both murder and attempted murder, as well as a number of stabbings, drive-by shootings, bombings, and attacks on synagogues and churches.Porrazzo was arrested in 1998 for assault in Springfield, Mo., and reportedly was handed a one-year suspsended sentence. But now Faella allegedly went further, stockpiling weapons, training people, including felons, for what he considered an “inevitable race war,” and conspiring to ambush members of a local anti-racist group.

And just like that, Porrazzo’s rivals had been eliminated.

Dugin and the Fourth Position

Today, as chairman of New Resistance, Porrazzo is pushing his new Fourth Position ideology, an attempt to meld together revolutionary nationalists and ethnic separatists of all backgrounds with Communist holdouts and anti-Zionists. As recently as August 2011 a post on his website had promoted the AF by saying the “Third Position offers a real future for the People of North America.” But shortly thereafter he did an about-face, claiming that Third Positionism had been ruined both by neo-Nazis who used the term “while keeping all their worst ideas” and by moderates who favored change through the electoral process. Porrazzo said, “The true ‘idea’ of the Third Position as left-right synthesis that we fought so hard for is valid, though dated, and was the starting point of what we are doing today.”

Now, Porrazzo holds that the Fourth Position — which he also describes as a kind of “left-nationalism” — is the “future of the revolutionary struggle against globalism, capitalism and liberalism.” His New Resistance supports authoritarian Syrian President Bashar Hafez al-Assad, mourns the defeat of Libya’s late ruler Muammar Gaddafi, and praises Venezuela’s leftist president, Hugo Chavez.

Followers are encouraged to read leftist classics by Karl Marx, Fidel Castro, and Che Guevara, all of which sit uneasily on his website next to fascist thinkers like Claudio Mutti and Julius Evola. Porrazzo’s favorite writer is Alexander Dugin, a Russian far-right political theorist who advocates a Eurasian super-state to oppose the Anglo-American alliance, liberalism and globalization. The Fourth Position takes it name from Dugin’s book The Fourth Political Theory.

Porrazzo’s group also employs left-wing slogans, calling for environmental sustainability, “social justice” and “direct democracy.” Still advocating racial separatism, it claims that in the future this will be voluntary; in areas where this is not possible, a form of ethnically based representation is proposed.

The New Resistance promotes the rambling Global Revolutionary Alliance (GRA) manifesto, which calls for global opposition to the United States, which is described as a country of “absolute evil.” In line with much anti-Semitic thinking, America is said to be inorganic, without collective identity, “a giant golem, controlled by the oligarchy.” The manifesto calls for an alliance of groups, from all races and religions, to destroy the “blood-sucking American oligarch liberal scum.”

Previously, Porrazzo was known for his high-octane anti-Semitism, calling Jews “a filthy, evil people the world would be better without.” But now, Porrazzo says his anti-Semitism was a “serious ethical error,” and that it was a mistaken outgrowth of his hatred of Zionism and capitalism; anti-Zionist Jews are welcome to work with New Resistance. However, just as the GRA manifesto’s description of the evil, inorganic, and cosmopolitan United States draws from traditional anti-Semitic formulations, so do Porrazzo’s descriptions of what he calls the “bandit state of Israel.” The “New Resistance Manifesto” that the New Resistance endorses states that “[w]e believe that Israel is nothing more than an imperialist, landlocked ‘aircraft carrier’ permanently moored to the Middle East, spreading destruction and subversion throughout the region.”

Although he has decades of political experience behind him, the jury is still out on whether Porrazzo and his New Resistance can establish a group with any real influence on the American radical right. One thing that seems certain is that he will be fighting an uphill battle, both because the American extreme right loathes the far left and because Porrazzo’s own penchant for infighting could destroy him.