Peter Thiel, the founder of PayPal, is sick of paying taxes, and he’s not going to stand for it any more.

Peter Thiel, the founder of PayPal, is sick of paying taxes, and he’s not going to stand for it any more. Rather than unilaterally secede from the government and face the indignity of being hauled to court as a tax-defying “sovereign citizen,” however, the super-rich hedge fund manager plans to start his own country.

Thiel’s no dummy: He knows that all the land on earth is already controlled by some nation or another.

That’s why he plans to establish his new country on the high seas. Thiel is an avid fan of seasteading, an ultra-libertarian concept in which “autonomous ocean communities” stationed in international waters would experiment with different forms of governance, competing for citizens’ fealty and wealth.

“I no longer believe that freedom and democracy are compatible,” Thiel wrote in a 2009 manifesto published by the libertarian Cato Institute. “Since 1920, the vast increase in welfare beneficiaries and the extension of the franchise to women — two constituencies that are notoriously tough for libertarians — have rendered the notion of ‘capitalist democracy’ into an oxymoron.” Bemoaning the fate of the “smartest libertarians” who, he claims, were so bummed out by the state of capitalism that they “escaped not only to alcohol but beyond it,” he outlined a vision of the future free from the quixotic desires of the poor, stupid, and X-chromosomed among us.

The driving ideal of PayPal, he wrote, was to create “a new world currency, free from all government control and dilution — the end of monetary sovereignty, as it were.”

Seasteading, he continued, is merely another means of achieving freedom from government control. 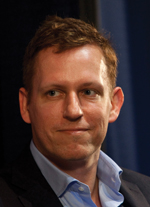 “The world needs a place where those who wish to experiment with building new societies can go to test out their ideas,” it says. “All land on Earth is already claimed, making the oceans humanity’s next frontier.”

In other words, seasteading would allow experimentation with all kinds of cool governments. Always wanted to live on an anarcho-syndicalist commune? How about a benevolent dictatorship? Or maybe your ideal is something like the Principality of Outer Baldonia, a now-defunct micro-nation off the coast of Nova Scotia whose declaration of independence endowed fishermen with inalienable rights including “the right to lie and be believed,” and “the right of freedom from questioning, nagging, shaving, interruption, women, taxes, politics, war, monologues, cant and inhibition.” Outer Baldonia even had its own currency — the Tunar, named for a game fish abundant in its waters.

With seasteading, all this and more would be possible.

Thiel already is helping to fund one floating utopia — Blueseed, a proposed vessel to be anchored in international waters 12 miles off the coast of Silicon Valley. Blueseed, which plans to launch by early 2014, intends to circumvent U.S. immigration law and be a haven for “the boldest, brightest, and most talented tech entrepreneurs from around the world.”

The Seasteading Institute has even bigger plans. Last November, it released a “location study” for larger, untethered “ship-based and large-scale city scenarios,” which took into account the factors that would be required for more elaborate “autonomous ocean communities.”

Seasteading isn’t the only sci-fi idea Thiel has invested in. In 2009, the quirky libertarian pledged up to $3.5 million to the Methuselah Foundation, a nonprofit group that funds research on “Strategies for Engineered Negligible Senescence” (SENS). In 2004, Aubrey de Grey, the foundation’s gaunt and long-bearded founder, told the BBC he thinks the first person who will live to 1,000 could be 60 already.

At 44, having invested in avoiding both death and taxes, Thiel must be feeling ahead of the game.