It’s been a rocky year so far for the National Organization for Marriage (NOM), the nation’s leading opponent of same-sex marriage.

It’s been a rocky year so far for the National Organization for Marriage (NOM), the nation’s leading opponent of same-sex marriage.

This March, a series of 2009 NOM documents was released as part of a legal battle the group is fighting in Maine to hide the identities of its donors in the face of state law. The most embarrassing detailed a plan to divide LGBT people from potential black allies. “The strategic goal of this project,” NOM said, “is to drive a wedge between gays and blacks.” It proposed developing black anti-gay spokesman in the hope of “provok[ing] the gay marriage base into responding by denouncing these spokesmen and women as bigots.”

In other words, make supporters of marriage equality look like racists, drawing attention away from the overwhelming support for same-sex marriage among black civil rights leaders. The plan was widely denounced as race baiting.

The same month, NOM launched a boycott of Starbucks because of the company’s support for same-sex marriage. Although NOM suggested it was having great success, in fact NOM was able to garner only 22,000 signatures in its first week — a period in which almost 300,000 people signed a petition supporting Starbucks. 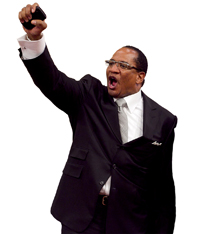 The National Organization for Marriage sought to build up black anti-gay voices like that of Rev. Patrick Wooden Sr. of North Carolina as part of a race-baiting plan to make supporters of same-sex marriage look like anti-black racists.

In the same vein, the Ruth Institute, a NOM project, has scheduled several virulent speakers for its July “It Takes a Family” conference. Robert Gagnon, a theology professor and proponent of “ex-gay” therapy, has railed on about the “significant pathological side” to homosexuality, which he falsely claims is linked to pedophilia. British barrister Paul Diamond, who claims that LGBT rights activists are creating a “totalitarian atmosphere” that is costing Christians their rights, is another slated speaker.