When Wade Michael Page strode into a Sikh temple in Oak Creek, Wis., and began to murder people, it was the culmination of more than a decade in the neo-Nazi movement. The best evidence suggests that Page initially came to his beliefs while serving at a North Carolina Army base that was then a hotbed of white supremacist activity, but they were honed by a dozen years on the white power music scene.

No one knows what drove Wade Michael Page to walk into the Sikh Temple of Wisconsin on a Sunday morning last August and start shooting worshippers with a 9 mm handgun. Maybe the 40-year-old white power musician believed he was killing Muslims, a group he despised because of the 9/11 attacks by radical Islamists.

He didn’t live to talk about it, though, and left no manifesto like the one written by the Muslim-hating Norwegian terrorist Anders Breivik last year.

But while his motive may never be known, the details of his life suggest that the path toward his final act began at a U.S Army base that was home to a thriving neo-Nazi underworld during the time Page was stationed there in the mid-1990s.

Page’s journey down that path took him deep into the world of hate music and, more recently, into the “patched” membership ranks of a violent skinhead crew. It ended on Aug. 5 in the Milwaukee suburb of Oak Creek, where he murdered six Sikhs, including the temple’s president and three priests, and wounded four other people. Lt. Brian Murphy, the first police officer to confront Page at the scene, survived the encounter but was shot in the throat and hit by eight more bullets when he came to the aid of Page’s victims. Page was finally felled by an officer’s rifle shot to the stomach as he stood firing in the temple’s parking lot; Page then put his pistol to his own head and fired.

Page’s attack, which prompted a September congressional hearing on hate crimes chaired by Sen. Dick Durbin (D-Ill.), was only the latest domestic terrorist attack in a wave that began with the election of President Obama in late 2008. Violence and conspiracies from white supremacists, apparently infuriated at the impending loss of a white majority population that was symbolized by Obama’s election, have ratcheted up in the last four years, as hate groups have grown and antigovernment “Patriot” organizations have expanded explosively.

For Page, the bloodbath in Oak Creek ended what apparently was a frustrating quest. He told an interviewer in 2010 that he had chosen the name End Apathy for a band he formed because he was trying to “figure out how to end people’s apathetic ways” and “move forward” for the white supremacist cause.

Evidently, the lyrics of hate were not enough.

In 1995, three years after Page joined the Army at age 20, the Colorado native arrived at Fort Bragg, a sprawling installation in Fayetteville, N.C., that’s home to the 82nd Airborne Division as well as the Army’s Special Forces Command.

When Page was transferred there, it also served as the home base for a brazen cadre of white supremacist soldiers. Nazi flags flew and party music endorsed the killing of African-Americans and Jews. And, according to the Military Law Review, soldiers openly sought recruits for the National Alliance, then the most dangerous and best organized neo-Nazi group in the country. A billboard just outside the base even advertised for the National Alliance.

That same year, three paratroopers from Fort Bragg murdered a black man and a black woman in Fayetteville to earn their spider web tattoos, racist badges of honor that sometimes signify that their bearers have killed non-whites. The soldiers went to prison for life, and 19 other paratroopers were discharged for participating in neo-Nazi activities. The scandal prompted congressional hearings and led to new military regulations aimed at preventing extremist activity. But as an investigation by the Intelligence Report a decade later showed, the new rules did not go nearly far enough.

Page’s exposure to the neo-Nazis at Fort Bragg seemed to catalyze his bigotry, driving him further into extremist territory, said Pete Simi, an associate professor of criminology at the University of Nebraska, Omaha.

Simi should know as well as anyone. He met Page in Orange County, Calif., while conducting interviews for a Ph.D. thesis on white supremacist groups — research that eventually led to the 2010 book American Swastika: Inside the White Power Movement’s Hidden Spaces of Hate, co-authored with sociologist Robert Futrell. Simi interviewed Page numerous times from 2001 to 2003, and even bunked with him and a white supremacist roommate to learn about their daily lives. 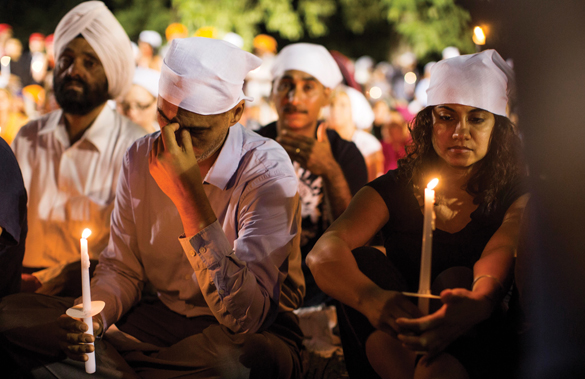 An Army buddy told the Milwaukee Journal Sentinel that Page expressed hatred for all non-whites, calling them “dirt people.” He also said Page sported a tattoo referring to the “14 Words,” shorthand for the notorious white supremacist catchphrase “We must secure the existence of our people and a future for White children,” coined by the late terrorist David Lane. A heavy drinker, Page eventually sank his military career by showing up for work drunk, another Army friend, Christopher Robillard, told the Journal Sentinel. When he refused treatment, the Army discharged Page in 1998, Robillard said. Page then moved in with a woman in Denver but wound up on the streets after they broke up.

Page was always a music lover, and another turning point toward violence came when he attended Georgia’s Hammerfest, a large white power music festival, in 2000. He was so attracted to the message and lifestyle of the musicians he met there that he relocated to the city of Orange in Southern California, then a thriving center of the racist music scene.

When Simi met him in 2001, Page was playing bass guitar and singing backup vocals with a band called Youngland. He couldn’t hold a regular job because he drank so heavily that he would pass out and miss work the next day, Simi said.

But he reveled in his white power music performances, which became the center of his life, and his rhetoric now fell squarely in the neo-Nazi corner. He called Muslims “towel heads” or “sand n------,” Simi recalled. He was so furious after the Sept. 11 attacks that he thought the U.S. should just bomb Middle Eastern countries to smithereens. Most of his hate rhetoric, though, was directed toward Jews and blacks. About the Holocaust, Page said, “They had it coming,” and “Germany did what needed to be done.” One chilling incident during the December holiday season reflected the depth of Page’s hatred: When he and Simi were entering a pizza parlor that had a decal of a menorah, a candelabrum used in Jewish ceremonies, on the door, Page refused to touch the door. “It was like it was poison. He just froze. He wouldn’t even touch anything that had a menorah on it.”

In 2003, Page was having trouble paying his bills, irritating his friends and evidently wearing out his welcome. He moved back to Fayetteville, where he worked at a Harley-Davidson dealership for a year and a half. John Tew, the general manager, told the Intelligence Report that he fired Page because he refused to obey orders from female co-workers. After Page had gone, Tew found an application for the Ku Klux Klan in his desk. “He actually came back for it when he realized he’d left it behind, but I’d thrown it away.” 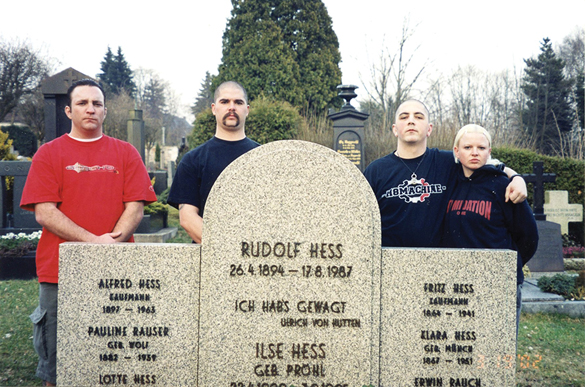 Meanwhile, Page stepped up his involvement in the white power music scene. He played on the festival circuit with racist skinhead bands including 13 Knots and Definite Hate. Definite Hate produced an album called “Violent Victory,” whose cover showed a disembodied white arm punching a black man in the face, with blood spurting out. Page formed End Apathy in 2005 and promoted it, along with Definite Hate, on Stormfront, the largest neo-Nazi Web forum. In a 2010 interview on the website of Label 56, which promoted the bands, Page said he had also played with Celtic Warrior, Radikahl, Max Resist, Intimidation One, Aggressive Force and Blue Eyed Devils. That list includes some of the best-known white power bands on the American scene.

Page’s immersion in the neo-Nazi rock music world undoubtedly raised his profile in extremist circles. In October 2011, he earned his “patch” and became a full member of the Northern Hammerskins, a chapter of Hammerskin Nation, one of the most violent and dominant skinhead groups in the U.S.

The last leg of Page’s journey took him to Milwaukee last year, where he moved in with a girlfriend, 31-year-old Misty Cook. Both were active posters on a message board for the Hammerskins. But the relationship fractured in June, and Page stopped showing up for his job in mid-July. His landlord said he owed back rent the day he entered the Sikh temple.

It’s probably no coincidence that the temple is just down the block from the restaurant where Cook worked. Perhaps the turban-wearing Sikh men caught his eye because of the proximity.

Sikh Americans are well aware of the danger of being targeted for hate crimes by racists who mistake them for Muslims. In fact, what is believed to be the first hate crime murder committed in retaliation for 9/11 was the Sept. 15, 2001, slaying of Balbir Singh Sodhi, 49, a Sikh who was shot to death outside the gas station he owned in Mesa, Ariz. The killer, Frank Silva Roque, described himself to police as “a patriot.”

“We’re apprehensive about the climate of bigotry out there now, and we don’t even have data about what’s happening to Sikh Americans,” said Rajdeep Singh, law and policy director for the Sikh Coalition, a human rights group, in an interview. (The Sikh Coalition and other groups representing Sikhs in September renewed a request that the federal government begin collecting data on hate crimes directed at Sikhs, because there is no definitive data on that category of victims at present.) “We’re conditioned to expect people will say nasty things, but to massacre us in a place of peace, a sanctuary — that, we never expected.”

Criminologist Simi, who was a fly on the wall in the white power music scene for several years, was shocked, too. He found it hard to believe that Page was involved. “I remember him saying, ‘When talk fails, violence prevails.’ But they all said stuff like that. The crazy part is, if you told me some of the others went on a shooting rampage, I wouldn’t be surprised at all. Wade was pretty mellow compared to the others in that skinhead, white supremacist culture. Many of them are far more violent.”

At the congressional hearing he chaired, Durbin made similar comments. “It was not the first tragedy based on hate and, sadly, it won’t be the last,” he said. “But it should cause all of us to redouble our efforts to combat the threat of domestic terrorism.”