A 1992 United Nations “smart growth” plan has long been demonized by the radical right. In the latest twist, Agenda 21 is now being described as a Jewish plot.

The antigovernment “Patriot” right has long feared Agenda 21 as a blueprint for the “New World Order.” As the conspiracy theory goes, the United Nations plan for “smart growth,” adopted by 178 countries more than 20 years ago, outlines a manipulative program to strip away U.S. sovereignty, take away Americans’ freedoms and establish a communist utopia.

Fearing the “greens” have become pawns in a stealth march toward totalitarianism, right-wing activists have disrupted local planning meetings across the country to decry efforts under Agenda 21 to protect the environment.

Now the conspiracy theory has begun to evolve.

Anti-Semites have latched onto Agenda 21 with claims that the non-binding U.N. agreement is part of a Jewish plot to rule the world. 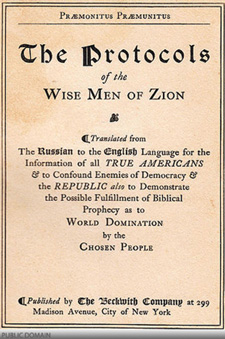 The mother of all Jewish conspiracies: The Protocols of the Elders of Zion, published in English after its initial release in 1903 in Russian, is a precursor to new anti-Semitic conspiracy theories about a UN “smart growth” plan.

“Even though these ‘green groups’ are causing enormous problems in every facet of our lives and need to be stopped in their tracks, they are only a means to an end,” the website Nature Cons claims. Then the site adds, “Agenda 21 is a core element of the Satanic Jewish conspiracy to control and enslave the planet.”

If it sounds like fantasy, it is. But similar claims are popping up across the Internet as neo-Nazis and other anti-Semites are suddenly interested in what has grown to be a cause célèbre for the Patriot movement. For example, James Wickstrom, a firebrand preacher of the racist, anti-Semitic theology known as Christian Identity, recently dedicated an hour of online video to vilifying the Jewish “internationalists” behind Agenda 21.

Perhaps blaming the Jews is a natural evolution for the Agenda 21 theory. The radical right has long associated Jews with globalism and collectivism, and the U.N. agreement fits comfortably within the confines of conspiracy theories about Jewish plans for world domination. Also, anti-Semitism has always lurked in the background of the Patriot movement’s core ideology. It was central to the ideas of the movement’s forebears, figures such as Gordon Kahl, the Posse Comitatus leader who killed two U.S. marshals in 1983. Wickstrom himself is a former high-level evangelist for the Posse, a violent tax-resistance movement that caught fire in the Midwest as a farm crisis gripped the region during the late 1970s and 1980s.

Ken Stern, an expert on anti-Semitism and extremism at the American Jewish Committee, told the Intelligence Report that the description of Agenda 21 as a Jewish plot is a direct descendent of the fear-mongering that surrounded the publication of The Protocols of the Elders of Zion. When Protocols was first published in 1903, it purported to document meetings of a secret Jewish cabal plotting to rule the world. Despite having been thoroughly debunked as a hoax, the tract has fueled more than a century of anti-Semitism, leading historian Norman Cohn to suggest that Hitler used the book as a justification for the Holocaust.

“Anti-Semitism is basically conspiracy theory,” Stern said. “It’s Jews conspiring to harm non-Jews, and that conspiracy explains a lot of what goes wrong with the world.”

That is certainly the sentiment at RealJewNews, an anti-Semitic website that warns that Agenda 21 and President Obama are in the final stage of the “Jewification of Amerika.” 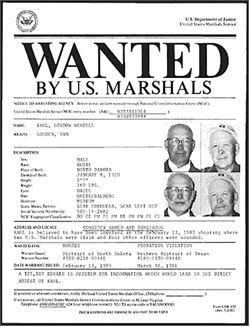 Despite all the fears surrounding the 300-page document, Agenda 21 is little more than a guidebook for local, state and national governments to consider when planning for economic development and the use of natural resources. The agreement, drafted in 1992 at the U.N. Conference on Environment and Development in Rio de Janeiro, is entirely voluntary, and the U.N. lacks any mechanism to enforce it. President George H.W. Bush, certainly no communist, was among the world leaders who signed on to it. Still, to the radical right, it represents an ominous threat to the United States. These worries are encapsulated in what Tom DeWeese, founder of the American Policy Center, wrote in 2009: “It sounds so friendly. So meaningful. So urgent. … But the devastation to our liberty and way of life is the same as if Lenin ordered it.”

Thanks to DeWeese, the John Birch Society and other activists in the Patriot movement, fears about Agenda 21 have now moved into the conservative mainstream, even as those on the fringes of the radical right use it to smear Jews as malevolent globalists seeking to install a totalitarian government. Last year, the Republican National Convention adopted an anti-Agenda 21 plank in the party’s platform. That followed a Republican National Committee resolution that condemned the agreement as a plan for “socialist/communist redistribution of wealth” and “global political control” being “covertly pushed” in local communities. The Tennessee legislature passed a resolution against it, and Alabama’s legislature went further, passing a law barring local governments from enacting Agenda 21-inspired policies that interfere with property rights.

Dick Morris, the conspiracy-minded former Fox News pundit who once worked as an adviser to President Bill Clinton, last year published Here Come the Black Helicopters: UN Global Governance and the Loss of Freedom. In it, he excoriates Agenda 21 and vilifies environmentalists with the same sort of venomous language neo-Nazis sometimes use to describe Jews. “The modern-day globalist and greens use the cause of reversing climate change and ‘saving’ our planetary environment as their justification for global planning and control,” Morris wrote. “But what they end up doing is canceling out both free will for the individual and democratic determination of policies for the nation. Only their fetish has priority.”

Meanwhile, on Stormfront, an online forum popular among neo-Nazis and other white supremacists, one commenter wrote in language not that dissimilar from Morris’s that Agenda 21 “is totalitarianism on a scale and degree unimagined and unimaginable by most of us. 1984 [a reference to George Orwell’s dystopian novel] is just ahead.”

No one espousing this new, anti-Semitic take on Agenda 21 has called for violence. But there is no question that dark tales of Jewish conspiracies have inspired hate and violence for more than a century. Wickstrom, perhaps the most extreme ideologue linking Jews to Agenda 21, said in 2004 that he wanted to see Jews tied up, beaten to death with baseball bats and thrown into wood chippers. His views are crystal clear, as are his warnings about what the U.N. sustainability agreement portends.

“Agenda 21 is very evil,” Wickstrom said in his online video. “It’s extremely evil because it comes from the dark side. You see, the light side is Yahweh the Christ, which is truth, always truth. Then you have the dark side, which is Jewish international communism.”

A few minutes later in his diatribe, Wickstrom doubled down: “Lenin was a Jew. Stalin had Jew blood. All of them were Jews! And these are the same kind of Jews that are now screaming in your U.S. Senate and Congress to disarm the American people.”