For months before his January arrest for plotting and preparing a terrorist attack against his black and gay classmates, 17-year-old Derek Mathew Shrout and a pack of up to 11 buddies allegedly wandered the halls of their Alabama high school, shouting “white power.”

For months before his January arrest for plotting and preparing a terrorist attack against his black and gay classmates, 17-year-old Derek Mathew Shrout and a pack of up to 11 buddies allegedly wandered the halls of their Alabama high school, shouting “white power.”

Sometimes, dressed in their green, Army-issued Junior ROTC uniforms, the white teenagers would do stiff-armed Nazi salutes — at breakfast in the cafeteria, between classes, in the school bus parking lot. 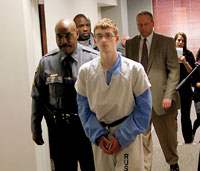 “It was right where everybody could watch it,” said David Lee White, 18, a senior at Russell County High School in the small town of Seale, Ala. “I even saw teachers standing there in the hallway, watching.”

Yet, apparently, not one faculty member or administrator at the racially mixed school intervened in the blatantly racist behavior until early January, when a teacher found one of Shrout’s notebooks left behind in a classroom. In it, the teacher discovered detailed plans for mass murder.

Shrout allegedly named and targeted five black students and a black teacher for serious harm in a series of bomb attacks, using improvised hand grenades that authorities say he was assembling in his military family’s home. A white classmate, who Shrout suspected of being gay, was also on the alleged hit list.

The authorities were alerted to the journal and Shrout was arrested and charged with felony attempted assault. “By his own admission, he is a white supremacist, but we haven’t been able to link him to any specific organization or any organization to him,” Russell County Sheriff Heath Taylor told the Intelligence Report in an interview about Shrout and his plans, which Shrout had “obviously put a lot of thought into.”

When sheriff’s investigators searched the teenager’s home they discovered a couple of dozen small tobacco cans and two larger metal containers marked “Fat Boy” and “Little Man.” The names are apparent references to the code names “Fat Man” and “Little Boy” used for the atomic bombs dropped on Japan by the United States during World War II. All of the containers were filled with pellets and had holes drilled in them. Sheriff Taylor said other ingredients needed to complete the devices, such as black powder and fuses, were not found.

Still, the explosive devices were just “a step or two away from being ready to explode” and would have caused serious damage or injuries, the sheriff said.

The teenager’s lawyer, Jeremy Armstrong, told reporters that the case against Shrout “is an overreaction” sparked by last December’s mass shooting at Sandy Hook Elementary School in Newtown, Conn.

Shrout was released from custody when his parents posted $75,000 bail. They have reportedly been shocked by their son’s alleged racist behavior and are said to be cooperating fully with investigators.

Dolores Elias Allen, the principal of Russell High from 2006 to 2009 and a member of the local NAACP, has also been in a state of shock about the case and how the racist gestures and shouts of “white power” echoing through the halls of the school were and were not handled by the staff.

“It looks like a breakdown in administration, people not following protocol,” Allen told the Report. “We, as educators, simply don’t allow, can’t allow, this kind of conduct.”