As investigators continued to seek insight into the radicalization of Tamerlan and Dzhokhar Tsarnaev, the apparent perpetrators of the April 15 Boston Marathon bombing, it emerged that Tamerlan Tsarnaev had consumed a smorgasbord of very American white supremacist and conspiracist publications popular on the domestic far right.

There is little question that the Tsarnaev brothers, ethnic Chechens who with their parents in 2002 relocated to the Boston area from the war-torn North Caucasus, were primarily motivated by a radical, violent interpretation of Islam. Tamerlan, who was killed in a police shootout on April 19 and is thought to have masterminded the attacks, was reportedly a fan of a variety of radical jihadist websites and figures, including Al Qaeda’s online English-language magazine Inspire. And Dzhokar, who has been charged with using a weapon of mass destruction resulting in death, reportedly told law enforcement officials that he and his brother were influenced by Anwar Al-Awlaki, a radical, U.S.-born jihadist who in 2011 was killed in Yemen by a U.S. drone attack.

Tamerlan Tsarnev (right), who with his younger brother, Dzhokhar, allegedly carried out the Boston Marathon bombings, clearly saw himself as an Islamist warrior. But he was also influenced by a range of American extremists, including Texas conspiracy-monger Alex Jones and a variety of anti-Semites. ULIA MALAKIE/AP IMAGES (TSARNAEV); FBI/AP IMAGES (TSARNAEV)

In a remarkable Aug. 6 article, The Wall Street Journal showed just how far down the conspiracist rabbit hole Tamerlan Tsarnaev had gone. Apparently influenced by an elderly man he helped his mother care for, Tamerlan in the time leading up to the bombing was steeping himself in far-right and white supremacist propaganda. 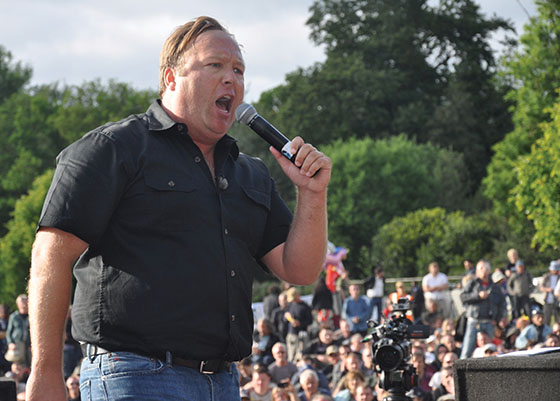 Among the publications he reportedly read were The First Freedom, an Alabama-based tabloid that claims to promote “equal rights for Whites” and brags of having its own NAACP — a “Nation of Aryans Against Commie Putrefaction” — and The Sovereign, which recently claimed the U.S. military is building a robot army to wage war against Americans on behalf of Israel. Tsarnaev subscribed to the American Free Press, an anti-Semitic weekly that promotes antigovernment conspiracy theories and Holocaust denialism, and was so taken by The Protocols of the Learned Elders of Zion, a notorious forgery that describes a vast Jewish conspiracy to rule the world, that he told his landlady she should read it, too.

Tsarnaev is not the only American extremist to have blurred the lines between far-right, white supremacist beliefs and radical jihadism. In 2011, a 22-year-old Pennsylvania man named Emerson Begolly, who was accused of using the Internet to encourage Islamic fundamentalists to launch terror attacks against U.S. targets, was dubbed the “Nazi Jihadist” after it emerged that he’d once been a member of the neo-Nazi National Socialist Movement (NSM). And in the mid-2000s, ex-Klansman and Aryan Nations bigwig August Kreis claimed (without any basis) to be forging an alliance between neo-Nazis and Muslim jihadists based on their common hatred of Jews.