Since being jailed in Britain shortly after returning from an illegal trip to the United States to speak to a gathering of anti-Muslim bigots last September, the ranks of Stephen Yaxley-Lennon’s far-right English Defence League have reportedly been dwindling.

Since being jailed in Britain shortly after returning from an illegal trip to the United States to speak to a gathering of anti-Muslim bigots last September, the ranks of Stephen Yaxley-Lennon’s far-right English Defence League have reportedly been dwindling.

Attendance at the group’s anti-Muslim rallies and marches is down and its members have been drifting away as the EDL “splinters into more extreme factions,” according to Channel 4 News in England. 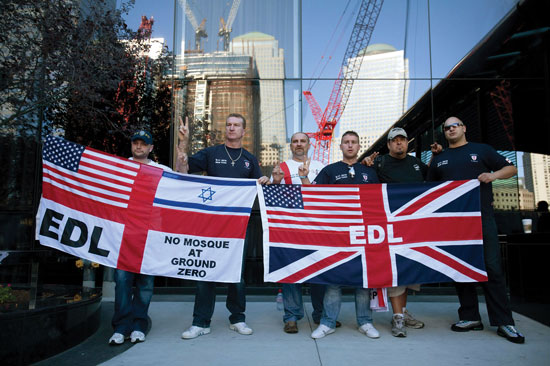 Stephen Yaxley-Lennon — or Tommy Robinson, or Paul Harris, depending on who you ask — pleaded guilty to British charges related to his illegal entry into the United States last year. Yaxley-Lennon’s far-right English Defence League has teamed up with American Islamophobe Pamela Geller, who denounced his arrest as an “outrage.”
HALEY SIPA/AP IMAGES

Yaxley-Lennon pleaded guilty on Jan. 7 to using a friend’s passport to illegally enter the United States to attend and address a conference in New York City of an international right-wing umbrella group, Stop Islamization of Nations (SION). The conference included a U.S. SION spinoff, Stop the Islamization of America (SIOA).

Pam Geller, the American anti-Muslim movement’s most visible and flamboyant figurehead and a Yaxley-Lennon ally, heads SIOA. Since Yaxley-Lennon’s arrest, Geller has tried to turn him into a martyr.

Calling him by his pseudonym, Tommy Robinson, Geller said in an Oct. 21 blog post that the arrest of the English extremist was an “outrage” and that he was a victim of a “relentless campaign of attrition, harassment and political persecution of Robinson by a weak, sharia-compliant UK government.”

A legal defense fund was set up on both sides of the Atlantic and his supporters called him a political prisoner. Geller vowed to “fight alongside him.”

But one anti-racist English blogger saw Geller’s position as hypocritical. “For the number of times they scream about ‘illegal immigrants’ setting foot on their precious land, you’d think they’d pick up on the fact that the EDL’s leader Tommy Robinson (Stephen Yaxley-Lennon) entered America illegally.”

After pleading guilty, the EDL leader was sentenced to 10 months in prison. But before sending him off to prison, there was a little confusion about which name to use in sentencing him: Stephen Yaxley-Lennon, Tommy Robinson or even a third name.

When he returned to England, Yaxley-Lennon used his legal passport, which apparently bears his real name — Paul Harris.

In the end, the judge sentenced him as Stephen Lennon, “although I suspect that is not actually your true name.”

Whatever his true name, as the judge told him in court, “You knew perfectly well that you were not welcome in the United States.”