The nation's largest and most organized antigovernment “sovereign citizens” group — one that claimed to be forming a government-in-waiting to take over America when the current, “unlawfully established” federal government crumbles — is now in danger of falling apart as its enigmatic leader sits in jail awaiting trial on tax fraud charges.

It has been two years since James Timothy Turner, a former commercial fisherman who lives in rural south Alabama, founded and became president of the group he called the Republic for the united States of America (RuSA). Turner told supporters he was backed by well-placed officials in the military and the CIA, as well as foreign investors who were willing to prop up his shadow government.

But Turner’s supposed support apparently didn’t include the U.S. Justice Department or the Internal Revenue Service. On Sept. 12, a federal grand jury indicted him on 10 counts of tax fraud. According to federal prosecutors, in the years before Turner started RuSA in 2010, he had brazenly tried to pay his taxes with a fictitious $300 million bond, then helped others do the same with similar bogus securities. He was arrested a day after the indictment and was denied bail after a judge deemed him a flight risk. 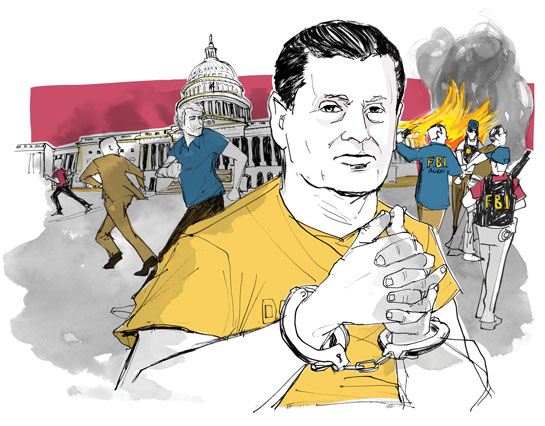 What is clear, though, is that federal law enforcement agencies have trained their sights on RuSA, the most prominent organization in a fast-growing sector of the radical right that has been characterized by the FBI as a “domestic terrorist” movement.

Though the group’s underlying premise — that it is forming a government to supplant what it considers an illegal “corporation” now running the country — suggests treasonous intent, there have been no politically motivated acts of violence linked to RuSA. And the group’s website states that it plans a “peaceful reconstruction” of the government “without controversy, violence or civil war.”

However, a number of its members have been charged with the kind of tax and financial crimes common among adherents of the sovereign citizens movement. In addition, one member in Arizona was killed in an altercation with police who responded to a domestic dispute and another in West Virginia died in a suspected murder-suicide in which his 9-year-old son was shot to death.

Now, sources within the FBI have told the Intelligence Report that RuSA engineered the 2010 disappearance of fugitives John and Julieanne Dimitrion, a wealthy couple in Hawaii who pleaded guilty to mortgage fraud but were spirited away aboard a private jet three days before they were to be sentenced (see story, p. 14). The Dimitrions are now on the FBI’s “Most Wanted List.”

Though RuSA has previously reached moments when dissolution seemed all but certain, the tumult brought on by Turner’s arrest and the increasing law enforcement scrutiny has undoubtedly created its biggest crisis yet.

Has the end finally come? And if so, will its members simply form another, perhaps more militant group?

“We as a Republic look very, very, very bad with our president sitting in jail,” RuSA spokesman Kelby Smith, one of Turner’s most vocal supporters, told followers during a conference call last October. “Either the president gets out of jail, or the Republic is going to be split.”

A Republic Divided
If the wild stories Turner told his followers were true, his arrest and incarceration should have been a mere hiccup for one of the most influential and colorful sovereign citizens in the movement, whose adherents generally believe they are immune to most tax and criminal laws. According to the mythology he peddled to his troops, there wasn’t a court in the land he didn’t hold the keys to, not a debt he couldn’t avoid. He boasted that he once escaped federal assassins sent to kill him and even that he cured leukemia.

He was, at least in his own mind, untouchable. Now, some of his supporters regard Turner as a “political prisoner.”

“What they’re trying to do is instill fear and discouragement into the people of the Republic — because those are really the only weapons they have,” James Geiger, who assumed the mantle of acting president, told RuSA members on a conference call. He was sure that it was only a matter of time before Turner would be free.

Turner’s followers put together plans to raise $5 million for a legal defense, only to abandon the effort a month later after collecting just $100. Infighting ensued as RuSA struggled to plan an election to find a successor, and soon members began fleeing the group. Those who made their resignation public used the same bombast with which they had joined. One member in South Carolina, for instance, wrote: “Let it be known to all human beings of real flesh and blood, that the undersigned, flesh and blood man” does “dissociate from all actions and decisions made by … pseudo executive members and representatives of the ‘Republic for the united States of America.’”

The crisis grew as the departures reached into the upper echelons of the group’s leadership. C.W. Wright, Turner’s vice president, stopped reporting for RuSA conference calls and appears to have left the movement. Faced with cries that he was a “dictator” for trying to organize elections to find Turner’s successor, Mark Lounsbury, RuSA’s “speaker of the house,” also left. Some believed that federal agents had infiltrated the group, and Nathan Peachy, RuSA’s “chief justice,” began calling for a mass exodus.

“I believe it is in the best interest of the people to free themselves of the Republic,” Peachy said. From his jail cell, though, Turner refused to accept the mounting consequences of his arrest and dismissed the federal charges against him as “saber rattling.” He encouraged followers to “cowboy up.”

On Oct. 15, in a handwritten letter penned from his cell, Turner announced he would seek to be re-elected so that he could lead RuSA from jail. In the meantime, he beseeched followers to pray “that God will crumble the foundations and break the power and strength” of the federal government. “I am praying daily that God will cut off all financial, military, political and spiritual support for the municipal corporate government in Washington, D.C.,” he wrote.

In Every War, a Casualty
At the core of RuSA’s ideology is the belief that the federal government is an illegal “corporation” formed in 1871 when Congress passed a law establishing a single municipal government for the District of Columbia. This corporation, working in the service of international bankers, has stolen the wealth and property of its citizens — its “economic slaves” — to use as collateral against the federal debt, RuSA says.

In RuSA, many in the antigovernment “Patriot” movement felt they had found a final solution to what they regard as an overreaching federal government. This new government would, for example, end “tax prosecutions for resisting the transfer of private wealth to such as I.R.S.” and stop “the use of covert contracts such as Form 1040, car registrations, birth certificate applications, and bank signature cards.”

Now, as RuSA’s true believers stare at the possibility that their cause is lost and that their president faces a lengthy prison term if convicted, there is reason to worry.

Some sovereign citizens in the past have reacted with violence when confronted by law enforcement and — some might say — reality. Jerry and Joe Kane, a father-son team of sovereigns, killed two police officers during a traffic stop in West Memphis, Ark., in 2010. And in August 2012, men believed to be sovereigns were arrested after they allegedly ambushed and killed two officers and wounded two more in LaPlace, La.

RuSA has, itself, attracted members with a propensity for violence.

Last year, William Foust, a prominent businessman in Page, Ariz., and a RuSA “ambassador,” was shot and killed by a police officer responding to a domestic violence complaint when Foust lunged for an officer’s Taser. Within the echo chamber of the sovereign underground, Foust was the first victim in the coming confrontation with Washington.

Similar suspicions of government involvement were aroused among RuSA members when David Hutzler, a one-time RuSA “congressman,” was found dead with his 9-year-old son in the burned remains of a trailer home in Glengary, W.Va. Both had been shot in the head, and police found accelerants used to start the fire. Hutzler had been unhappy about RuSA’s lack of action against the government. Just days before his death, he posted a rant on a popular antigovernment Web forum in which he said it wouldn’t be long before liberty-loving citizens had no choice but insurrection.

As outlandish as his views and pronouncements appear, Turner has been the one who has kept RuSA members from acting on their rage against the government as their rhetoric has turned increasingly confrontational. After Foust was killed, for example, he spent weeks trying to pacify angry RuSA members and quell suggestions of revenge. But when he was arrested, even he showed signs of a shift.

Sheriff’s deputies working with U.S. marshals in Dale County, Ala., were concerned that if Turner knew what was coming, there was a possibility of violence. So Turner was summoned to the Dale County Sheriff’s Department on the pretense of discussing a matter concerning RuSA, only to be surprised by deputies who read him his Miranda rights.

After his arrest, Turner told the officers something that may spell out just how RuSA has come to see its relationship to the federal government. “In every war, there has to be a casualty,” Turner said, according to several present in the room. “And if I have to be a casualty, so be it.”