Even in the world of racist skinheads, the group known as Die Auserwählten, or Crew 41, was virtually unknown. Then came a rush of bloody violence in two states.

Hardly anyone had heard of the neo-Nazi skinhead crew Die Auserwählten — “the chosen few” — before its cross-country coming-out party during a bloody weekend this summer. Then a 27-year-old man in Nebraska had his skull kicked in and a middle-aged couple in South Carolina were shot and stabbed to death in their home.

Until that violent Saturday and Sunday in July, the chosen few had been spewing their brand of white supremacy and racist Christian Identity theology for less than a year on small-town street corners and over the Internet, its members scattered across the country in seven tiny chapters. Several members of the gang — also known as Crew 41 — had met only virtually on the group’s website and community forum, where an early thread of Internet messages encouraged crew members to “Introduce Yourselves.” 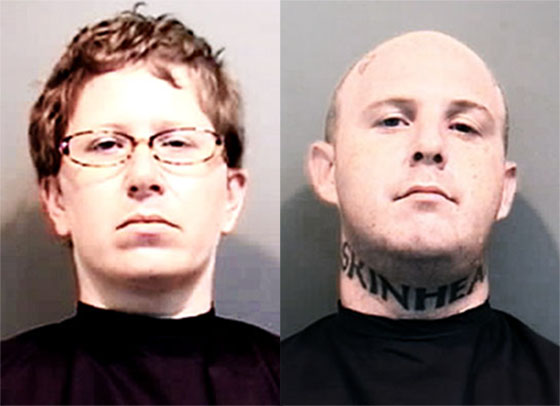 Christine and Jeremy Moody help put their new neo-Nazi skinhead group on the map when they allegedly murdered a South Carolina man because he was a registered sex offender. Then, according to their statements to police, they killed the man’s wife to eliminate a witness.
UNION COUNTY SC JAIL/AP WIDEWORLD

Crew 41 was essentially created and organized online, a pop-up gang. But in an interview with the Intelligence Report, the group’s president, Brandon Hoffpauir, 37, of Pride, La., said the crew was much more than “a flash in the pan,” insisting “we are not Internet Nazis” or “keyboard warriors.”

“We’re American National Socialists,” Hoffpauir said. “Which means, we are standing up for America. What true America used to be. What it was. What it can be without the filth.” 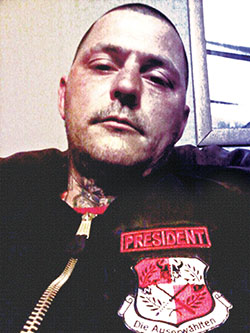 Gang leader Brandon Hoffpauir says his group is about implementing National Socialism and eliminating “the filth.”
FROM CREW 41 FACEBOOK

“If you are unable to own a weapon,” the founder of the crew, Johnathan “Monster” Schmidt wrote in April, “I suggest yiu [sic] make your body and mind your primary weapon…be in shape and be prepared to dine in Valhalla 841!!!!.”

Crew 41 is partial to exclamation points.

The gang had scheduled a Midwestern meet-and-greet in August, but the gathering was cancelled as the crew’s legal troubles began to mount. Schmidt, 29, his face, bald head and beefy body covered in tattoos of hate, was accused of using his feet as a weapon. He faces up to 50 years in prison if convicted of dragging a man out of a car in Kearney, Neb., on the night of Saturday, July 20, and kicking him so hard in the head that the man’s skull was fractured. The victim survived and picked Schmidt out of a photo lineup, according to police.

Schmidt swears he is innocent of the brutal assault that occurred during a popular car show and parade known as Cruise Nite through the heart of the college town. Schmidt says he is the victim — of mistaken identity. “I think he’s been trying to get someone to take the fall for him,” a Nebraska prosecutor familiar with the case told the Intelligence Report. “Unfortunately, this person he’s blaming looks nothing like him. With Mr. Schmidt’s appearance, it’s hard to mistake him for someone else.”

About 1,200 miles to the east of the bloodstained street in Kearney, Crew 41’s entire South Carolina chapter, apparently consisting of just two people — Jeremy Moody, 30, and his wife Christine, 36 — was charged with the murder of Charles Parker, 59, and his wife Gretchen, 51. The Parkers were shot and stabbed to death in their home in Union County, S.C. on Sunday, July 21.

“I’ve been a skinhead for 16 years, and am completely dedicated and interested in furthering Crew 41 and its foundation,” Jeremy Moody wrote into the forum on June 5. He identified himself as “JeremyCrew41” and his thread was titled, “My first post and introduction.”

“Together,” he continued, “it will flourish into something magnificent. I’m ordering my shirt today, they all look badass. I’m from South Carolina, and can’t wait to get a chapter started here! Thanks John for giving me this opportunity.”

The crew’s sergeant at arms wrote back, welcoming Moody and “your ideas,” and adding, “I for one look forward to seeing what you can do. 841!”

The sergeant’s sign-off is typical of American neo-Nazi skinheads, who commonly use numbers to represent letters. In this case, the 8 stands for the eighth letter of the alphabet — H — which in turn stands for Heil (or, in English, Hail). In the same way, 41 is shorthand for Die Auserwählten.

When the Moodys were arrested three days after the murders, they practically bragged about killing the middle-aged couple. Moody told the authorities that he killed Charles Parker after finding Parker’s name on a list of registered sex offenders, according to Union County Sheriff David Taylor. “Moody told us he targeted this individual because he was a child molester,” the sheriff said, adding that Parker was actually on an offender registry, for having sex with a mentally challenged 31-year-old woman years ago.

As for why Gretchen Parker was killed, Taylor said Moody calmly explained she was simply “a casualty of war.”

The sheriff said Moody’s wife Christine was tight-lipped when first arrested but grew jealous of the media attention her husband was receiving. She too began to boast. She told authorities that she cut Gretchen Parker’s throat. “She wants to get the glory,” Sheriff Taylor said. “She’s cold as hell.”

If ridding the world of registered sex offenders was the Moodys’ goal, they could have started their hunt within the ranks of Crew 41. At the time the Parkers were killed, the head of the group’s Colorado chapter was on a list of registered sex offenders in Delta, Colo., apparently for having sex with an underage girl at a party. “He wasn’t the only person that slept with the girl,” crew president Hoffpauir said. “But he was the only one charged.”

As for the Moodys, Hoffpauir said they were probationary members — “probates” — and had only been involved with Crew 41 for a few weeks before they were arrested. “So we still had a lot to learn about these people,” he said.

But in a post on VK, a Russian version of Facebook, Schmidt, the group’s founder, made Jeremy Moody sound like a full-fledged member. “I am out on bail, facing 50 years in prison,” he wrote. “And our South Carolina chapter has been picked up on murder charges. Having a hard first year but hopefully things turn around for us.” 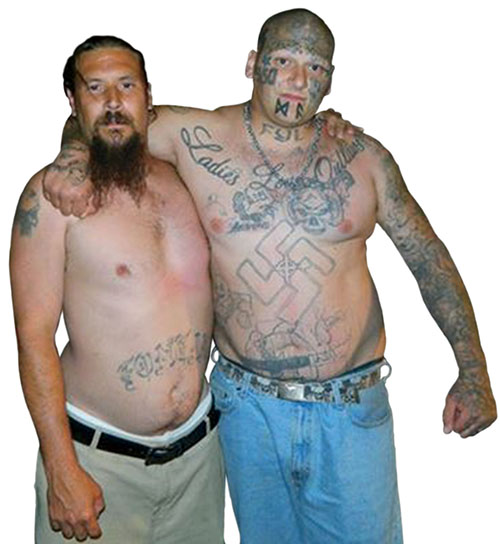 Crew 41 founder Jonathan “Monster” Schmidt (right), accused of kicking in a man’s skull, had urged members to “make your body and mind your primary weapon.” FROM CREW 41 FACEBOOK

On his Facebook page, Schmidt also wrote about the Moodys: “Though I can’t blame them for their actions, this in no way was ordered.”

Schmidt, who lives in Pleasanton, a small town in south central Nebraska, started the gang on Jan. 28, three days after resigning his position as national director of the Aryan Terror Brigade (ATB). He left ATB under a cloud of suspicion. Schmidt was accused online of being a police informant, a charge, Schmidt wrote on VK, that “makes me laugh and at the same time makes me sick.”

By Feb. 20, Schmidt announced that the Die Auserwahlten group and its forum were up and running with a thread titled “The Balls Rolling.”

“I know starting a new crew has its ups and downs but the ball is finally rolling…patches are at [the] print [ers]..we got our forum up and most of all we have a solid group of guys with one goal…preserving our race and protecting our nation... and white unity.”

Apparently, white unity only goes so far. Both the man Schmidt is accused of stomping and the couple the Moodys are charged with murdering were white.

On Feb. 22, Schmidt returned to the forum and wrote, “…this crew is gonna go places.. i did not found this club to gain popularity or build a name..
i built it to bring those of us together thay [sic] are sick of the infighting and brothers wars.. i named it Die Auserwahlten …‘we the
chosen few’ because you are all hand picked to be amongst the best of the best… .”

The next day, the founder started a new thread, “DUES and WHY WE PAY THEM.”

“The reason we pay dues is to keep this family funded.. i know nit [sic] everyone agrees but the things we need and events etc are not free… 20$ [sic] a month is not a lot to ask especially if you drink ir [sic] smoke.”

Schmidt also sometimes turned off his computer and took his message directly to the streets of Kearney. That is where a 30-year-old woman who works with troubled teenagers first saw Schmidt and a burly companion last spring. “They’re intimidating-looking guys,” she said. Schmidt, she said, was stripped to the waist, showing off his chest of tattoos, including a large swastika. The men were standing on a corner, holding signs. One urged passersby to visit the gang’s website. The other contained a long Bible passage. “I don’t know how they expected anybody to read it,” the woman said, “because it’s a busy intersection and it was a long quote.”

Disgusted, she drove past and later asked friends if they knew anything about the men. “No one had heard of them,” she said. “But everybody was appalled that we had this in our community.”

The next time she saw Schmidt and his comrade on the corner with their signs she pulled her car over and opened her trunk to retrieve poster board and a Sharpie her son had used to advertise his lemonade stand. She hastily made a sign of her own, “Preach Love, Not Hate.”

“It really infuriated me that he would put himself out there like that,” she said. “We’re a pretty diverse town. We have a nice university, a lot of international students. I did not want John Schmidt to be the example of our community.”

Several weeks later, Schmidt was arrested and charged with the brutal assault that could keep him behind bars for 50 years. The local newspaper, the Kearney Hub, ran a photograph of Schmidt’s heavily tattooed face, including runes, or medieval Germanic letters, on his left eyebrow that spell out a four-letter word.