A self-described “white nationalist” pens a film guide to help “our people” avoid “Jewed” movies. But he doesn’t leave much for his comrades to watch.

You know what’s the worst? Getting home from a long day at the office, settling down with some Jiffy Pop and a glass of Chablis (or whatever European single-origin varietal suits your fancy), popping in the DVD you’ve been waiting all week to watch — and then realizing that you were suckered into renting yet another piece of poisonous, Jew-inspired, multiculturalist propaganda.

Trevor Lynch hopes you’ll never have this experience again. That’s why he produced Trevor Lynch’s White Nationalist Guide to the Movies, a collection of essays devoted to helping white nationalists get the most out of recent American cinematic offerings.

As Lynch sees things, “the film industry in the United States … is controlled by an alien and hostile people, the Jews” who, he writes, “use movies and movie theaters as tools to destroy their enemies.” His book, which features on its cover rear silhouettes of movie-goers — including one whose arm is raised in an unmistakable Hitler salute — is meant to remedy this by arming white nationalists against the supposed Jewish propaganda machine. 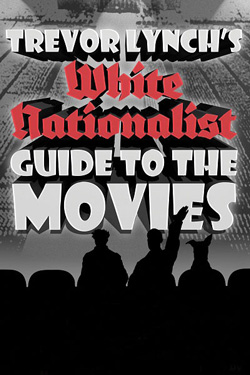 Howling about Hollywood: “Trevor Lynch,” aka Greg Johnson, offers the world a vigorous “thumbs down” when it comes to films made by an industry that is “controlled by an alien and hostile people, the Jews.”

Nothing bums Lynch out as much as white movie heroes who strike him as defenders of multiculturalism. Viewing films through his swastika-colored lenses, he sees them everywhere — not least in Batman, whom he characterizes as a failed Nietzschean Ubermensch “enslaved by the sentimental notion that every human life has some sort of innate value.”

Rather, Lynch prefers supervillains, describing the Joker as portrayed in recent Batman films as a “Nietzschean philosopher” who has “gone beyond egalitarian humanism” and become “morally free from the yoke of serving his inferiors” (the highest of high crimes, in Lynch’s reading of morality).

Lynch also loathes Quentin Tarantino, who, while “not a Jew,” “is the product of a thoroughly Jewed, decadent, cynical popular culture” and who “[f]rom a racial point of view … is a disaster.”

Despite his gripes, Lynch manages to find at least a few films worthy of praise. Chief among these is the “Lord of the Rings” trilogy, which Lynch — tipping his cap to Hitler’s lieutenant — gives a “Goebbels Award” for “contain[ing] not a shred of Jewish propaganda.” Rhapsodizing about his favorite of the trilogy, Lynch writes, “I urge every White Nationalist to see ‘The Two Towers’ for a glimpse, in the here and now, of the white civilization that we have lost, and that we are working hard to create again.”

Speaking of fantasy, “Trevor Lynch” is not precisely a real person himself. Rather, he is the alter-ego of a tiresome and self-important fellow named Greg Johnson who runs a vastly pretentious website called Counter-Currents.com, on which many of the essays that comprise his Guide originally appeared.

The Guide’s foreword is by Kevin MacDonald, a professor of psychology at California State University, Long Beach, who is famous for hanging out with ex-Klansman David Duke and for opining that anti-Semitism, far from being an irrational hatred for Jews, is a logical reaction to Jewish success in societies controlled by other ethnic or racial groups. It was published by Lynch/Johnson’s imprint, Counter-Currents Publishing Ltd., whose other offerings include a collection of “non-Semitic psalms” by Savitri Devi, an Axis spy and National Socialist “philosopher.”

Lynch/Johnson — who also shows an affinity for so-called esoteric Nazism — might be considered shocking, if only he weren’t such a bore. A consummate nerd and self-described “LOTR [Lord of the Rings] fanatic,” he’s the kind of guy who finds himself at parties at which “Pulp Fiction” is described as a film about “greatness of soul at the end of history,” and who complains as lustily about “lowbrow” appropriation of the term “postmodern” as he does about the supposed Jewish scheme to undermine “higher morality” by putting “dangerous truths” “in the mouths of monsters” like the racist skinheads of “American History X.”

Lynch/Johnson dreams of a world “after the revolution” in which whites have “our own mass media.” He’s willing to be part of that battle – and movie reviews, he says, are the most valuable thing he can contribute. “Imagine a young man who stumbles across one of my reviews because he is reading up on a movie he wants to see,” he writes. “[W]e can teach our people to see through the propaganda. … This is asymmetrical cultural warfare at its best.”