The War On Krishna: Religious-right activists, fresh from the front lines of the War on Christmas, take on a new and dangerous pagan threat

Creeping Shariah. The homosexual agenda. Secular humanism, socialism, and the perennial, odious War on Christmas. The thousand years of darkness said to have begun when Barack Obama was re-elected in November.

Yes, Christian nationalists — those self-appointed stewards of America’s “Judeo-Christian heritage” — have a lot on their plates. But that doesn’t mean they’ve let their guard down. 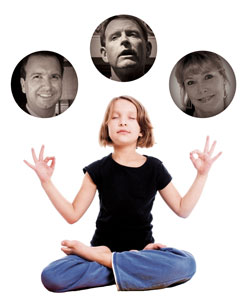 Yoga: According to Dean Broyles, Tony Perkins and Marsha West,
it’s not for Christians any more.
GETTY IMAGES

The name of that threat?

Since October, a group of parents in Encinitas, Calif., have been working with the Encinitas-based National Center for Law and Policy (NCLP) to stop one of the town’s public elementary schools from teaching yoga to its students and thus indoctrinating them in the Hindu faith.

The NCLP is helmed by Dean Broyles, a lawyer who says he was “called to law school specifically to be trained to fight for religious liberties.” He apprenticed under Jay Sekulow, head of the Christian-right American Center for Law and Justice, and “received extensive training in pro-family, pro-life and pro-religious liberty matters” from the National Litigation Academies run by the virulently anti-gay Alliance Defending Freedom (formerly Alliance Defense Fund).

A minor celebrity within Christian-right circles, Broyles is a vigorous opponent of gay marriage who lectures on “How the Radical Homosexual Agenda is Destroying America” and promotes nullification, a fringe legal theory which claims that states have the right to ignore federal laws they consider unconstitutional.

Now, he has a new bone to pick — with yoga. Though the Encinitas program, like many American adaptations of yoga, has been stripped utterly of any references to prayer and reduced to a strictly physical regimen, that’s not enough for Broyles. “[W]ho decides when enough religion has been stripped out of the program to make it legal?” he asks. “That’s the problem when you introduce religion into the curriculum and actually immerse and marinate children in the program.”

Broyles is not the only far-right Christian hardliner to brood over the potential impact of yoga on vulnerable young minds. Tony Perkins, president of the anti-gay Family Research Council, in January lit into the U.S. military for promoting the pagan art among its members.

Discussing on his radio show a weekly yoga class offered to U.S. Marines as a means of dealing with stress, Perkins lamented that “the military seems intent on driving religion out and replacing it with wacky substitutes. They’ve added atheist chaplains, Wiccan worship centers, and now, meditation classes. But none of them are as effective or as constructive as a personal relationship with God.”

Yoga is not a new concern. In 2011, Marsha West of the anti-gay American Family Association wrote: “Yoga is not ‘just exercising.’ Participants are being swept into a counterfeit religion. According to God’s Word, pagan religions, such as Hinduism and Buddhism, are evil.”

“Implementing Hindu based spiritual practices is an affront to a holy God,” Mark Webster of the online Christian Apologetics Ministry wrote in a 2010 article titled, “Yoga/Contemplative Prayer: The Snake Is In The House.” He continued, “The Lord Jesus Christ is the snake killer par excellence.”

Nor is yoga the only athletic endeavor to which Christian-right hardliners have taken umbrage. The Olympics was established by the ancient Greeks to honor Zeus, king of the gods. Even today, the winners of this heathen festival are rewarded with precious metals and parades; the losers return home in shame.

Early Christian world leaders strove to outlaw this display of blasphemy — yet today, many tolerate and even applaud it.

But not all. “There is an irreconcilable conflict between Greek Athleticism and the Christian Biblical Worldview. The invocation of anything based upon the acceptance of ancient Greek philosophy has consistently been the foundation for opposition to Christianity,” declares the website of CreationWorldview. “What is wrong with the Olympics? It is an alternative religion which embraces a spirit of supremacy, a win-at-all-costs attitude, that is completely at odds with the values of Christianity!”

Even football, that most red-blooded of American sports, can be an affront to the truly pious. “We must look at the state of our hearts,” admonished the pastor of Moreland, Georgia’s First Baptist Church in a late-September column. “On Saturdays does … football completely dominate and take-over [sic] our thinking? If you have a desire or joy for something more than God, you’re an idolater.”