Redwatch has come to the United States.

Redwatch has come to the United States.

In Britain, after a similar Redwatch website listed detailed information about enemies of the neo-Nazi movement, a longtime labor activist was stabbed in the face in front of his young daughter as he opened his door to a stranger.

In Poland, after a local version of Redwatch listed an anti-racist there, the man was stabbed in Warsaw. Eventually, police arrested a man associated with the neo-Nazi Blood & Honour group that had a hand in running the site, which was based on a U.S. server. Polish authorities later got U.S. help in shutting it down.

Now, courtesy of violent neo-Nazi Josh Steever, there’s an American version hosted by Steever’s Aryan Terror Brigade and Combat 18, which with Blood & Honour was involved in the European sites. Steever, who has the word “racist” and a swastika tattooed on his face, has served time both for beating a man with an axe handle and for threatening to stab two black high school students. 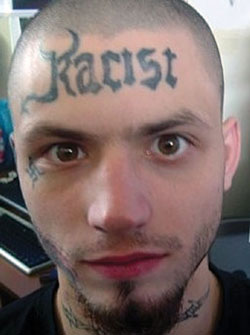 Apparently, no one targeted on Steever’s site has been harmed as yet. But European anti-racist activists say that many people listed there, in addition to the two stabbed in Britain and Poland, have been beaten or harassed as a result.

Steever is known as a thug even within the racist skinhead movement and, according to One People’s Project, has been cut loose from the international Blood & Honour movement because of his propensity for starting internal movement feuds and accusing movement comrades of being traitors. More widely, Steever is known for his 2011 marriage to Danielle Swayze, niece of the late movie star Patrick Swayze — a short-lived union that made the cover of the National Enquirer.

Steever has been close to a number of alleged terrorists. He was a friend of Daniel Cowart, a skinhead who like Steever was for a time associated with the Supreme White Alliance hate group and who confessed to a 2008 plot to murder Barack Obama. Steever’s Aryan Terror Brigade also was reportedly active in recruiting dissident members of the Florida chapter of the neo-Nazi American Front, 14 of whom were arrested in early 2012 and charged with illegal paramilitary training and other crimes in connection with an expected race war.