Just over a century ago, on Aug. 25, 1913, a Georgia jury found factory superintendent Leo Frank guilty of the horrific murder of 13-year-old Mary Phagan, whose strangled corpse was found in the basement of Atlanta’s National Pencil Company, which Frank ran. Frank, who was 29 at the time, was said to have flirted with the young girl and was supposedly the last person to see her alive. A jury sentenced him to death for the crime.

In 1915, Georgia’s governor, citing concerns about a miscarriage of justice, commuted Frank’s sentence. Soon after that, a mob calling itself the “Knights of Mary Phagan” kidnapped Frank from prison and lynched him.

The Frank case reawakened the Ku Klux Klan, sparking its so-called “second era,” and inspired a wave anti-Semitic sentiment. And though Frank was posthumously pardoned in 1986, 100 years after the fact, his case remains a cause célèbre among American anti-Semites. In August, The Jewish Daily Forward published a groundbreaking article exploring the modern Leo Frank propaganda industry and the websites it has produced. 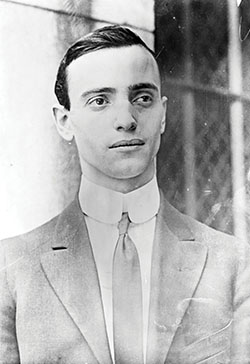 Other anti-Frank propagandists are all too happy to take credit for their efforts. The Forward identified Kevin Strom, a bookish neo-Nazi with a fondness for child pornography, as the brains behind LeoFrank.info, one of the more polished anti-Frank sites. A former deputy to the late William Pierce, leader of the neo-Nazi National Alliance, Strom broke away to form his own radical group, National Vanguard. Later, in 2007, he was indicted for possession of child pornography and eventually convicted. His group dissolved as a result, but Strom since his release has continued to work behind the scenes.

Two of the sites noted by the Forward are run by John de Nugent, a self-styled ombudsman for the “responsible white separatist community” who claims, among other things, that “Whites descend from Nordic Aliens, and this is why we are NOT from this planet and are VERY different from other races.”

De Nugent’s LeoFrank.org is more obviously anti-Semitic than Strom’s site, but still polished enough to fool a naïve young student. His other site, MaryPhagan.info, is more blatant, featuring, among other things, a music video for a song by neo-Nazi punk band “Achtung Juden” (“Beware Jews”) called “The Knights of Mary Fagan,” whose first comprehensible line is, “String up the Jews.”