For years, Ayo Kimathi lived out his double life of federal employee by day and ranting racist by night while working for one of the nation’s largest law enforcement agencies.

Since 2009, Kimathi spent his workdays at the Department of Homeland Security (DHS) in a unit that procures, among other items, bullets and guns. His nights and weekends were spent much differently as the Irritated Genie, an ultra-militant, anti-white, LGBT-hating black nationalist.

As the Genie, he operated a website — War on the Horizon — and gleefully predicted a coming race war, advocated the “ethnic cleansing” of “black-skinned Uncle Tom race traitors,” and declared that if black people are to survive the 21st century then “we are going to have to kill a lot of whites.”

Remarkably, he did little to hide his after-hours activities, which he calls “race work.” He appeared, without mask or shadow, in numerous YouTube videos as the Irritated Genie, denouncing “crackers” and “f---” — with a straight face. 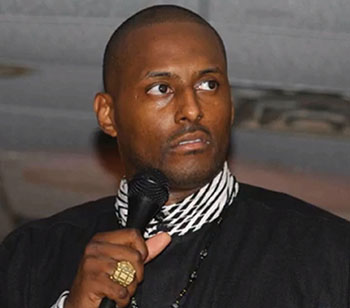 After Ayo Kimathi was exposed as the Internet’s white- and gay-hating Irritated Genie, DHS officials suspended the man who called on black people to “kill a lot of whites.”
FROM YOUTUBE

But a few days after the Southern Poverty Law Center blog Hatewatch first reported on Aug. 21 about Kimathi’s racist ranting and unlikely day job, the DHS finally tried to put the Irritated Genie back in his bottle. Kimathi was placed on administrative leave, where he remained at press time. In the meantime, he was required to essentially re-apply for his job, including submitting fresh paperwork to prove his “suitability” to work for the DHS.

He was also removed from the DHS website. The War on the Horizon Facebook page is gone, too, but not before the Irritated Genie or one of his comrades declared on the page shortly after Kimathi was put on leave that “[t]he war is on! The smallhats (white so-called jews) have stepped it up.”

Kimathi also took his cause to a call-in radio show. “All right brothers and sisters, the jig is up,” he said, chuckling. “Our Super Hero has been unmasked. No more walking around under the cloak of apparent secrecy.”

He said he had met that morning with the Secret Service after his double life was publicly revealed. “They grilled me and everything like that,” Kimathi said.

“I must be a very important person these days,” he added. “A lot of my friends are calling pretty regularly, but a lot of my enemies are calling a little more regularly.”

Kimathi said he was flooded with racist telephone calls and E-mails from “spirited Europeans.”

“I’ve been called more N-words than a rap video,” he chuckled.

He read some of the E-mails on the air, including one from a man who said: “I agree with everything you say about the gay agenda. But the sodomites are not just trying to turn black men into f------. They are doing the same with white males. What we are seeing is a war against men, no matter what color.”

The Irritated Genie said “this cracker shook me a little bit.”

“Quite frankly,” he added, “I don’t know exactly how to disagree with that aspect of it. I don’t like none of these crackers. But he has a point.”

It is unknown what Kimathi did after the show. Maybe he went home to fill out his suitability papers to make sure he held on to his old job. At the DHS, he was making $115,000.