January 9
Three men, including two members of the neo-Nazi National Socialist Movement, allegedly lured a suspected drug dealer into a car, beat him severely, slit his throat and stabbed him as part of a campaign against drugs. Jeffrey Allen and NSM members Anthony Baumgartner and Stephen Harkness were arrested six days after the slaying, which included dismemberment of the victim, in Boone County, Ky.

January 14
A Riverside County, Calif., judge found 12-year-old Joseph Hall guilty of the murder of his father, a West Coast leader of the neo-Nazi National Socialist Movement. The boy, 10 at the time of the May 1, 2011, killing, shot Jeff Hall in the head as he lay sleeping on a sofa in the family’s Riverside home. 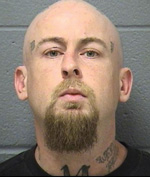 February 6
A federal judge sentenced Charles Robert “Junior” Barefoot Jr., a Benson, N.C., man who headed a klavern of the Church of the National Knights of the Ku Klux Klan, to 15 years in prison on weapons and explosive charges in connection with a plot to murder Johnston County Sheriff Steve Bizell in 2001. Barefoot had earlier been judged incompetent by state officials to stand trial in a 2001 murder.

A federal judge in Chicago sentenced Bill White, founder of the neo-Nazi American National Socialist Workers Party, to 3 years in prison on charges related to Internet threats he made against the foreman of a jury that sent a different white supremacist, neo-Nazi leader Matt Hale of the World Church of the Creator, to prison.

March 8
A member of WAR Skins, an offshoot of the defunct neo-Nazi group White Aryan Resistance, was sentenced to life for the January 2012 murder of a man during a home invasion/robbery in Cottage Grove, Ore. Robert Paul Smith shot the 48-year-old victim in front of his 78-year-old father, who the victim was caring for.

March 8
Fifty-five-year-old Jeffrey Allen Wright of Navarre, Fla., an apparent “sovereign citizen” who believed he was not subject to U.S. laws, was killed after allegedly pointing a gun at Santa Rosa County sheriff’s deputies in a standoff at his home. The officers were there to arrest Wright for creating fake money orders to pay off traffic fines, a practice that is common in the sovereign movement. 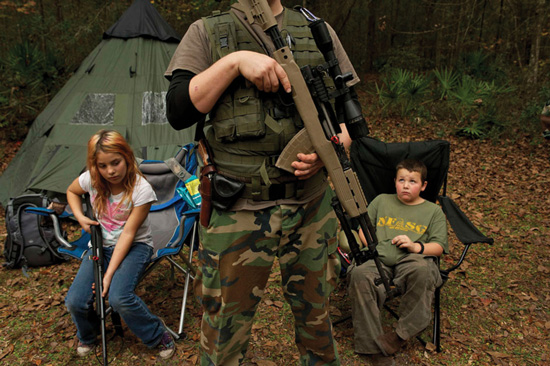 December 8
Six days before the Sandy Hook Elementary School massacre in Newtown, Conn., 57-year-old retired police officer Jim Foster allowed photographer Brian Blanco to accompany his North Florida Survival Group as it performed “enemy contact drills” in the woods. Foster refers to his group, which aims to teach “patriots to survive in order to protect and defend our Constitution against all enemy threats,” as a “militia” and says that its members deeply distrust the federal government and, especially, President Obama, who is suspected of moving the country toward socialism and secretly planning to confiscate Americans’ guns. Foster doesn’t stop at training adults for the repression he expects at any moment; several children, including 9-year-old Brianna and her brother (both above), were among those training with semi-automatic assault rifles. The message on the boy’s T-shirt — “I’m willing to die to defend my 2nd Amendment rights, Are you willing to die trying to take them from me?” — sums up Foster’s attitude as well. After Sandy Hook, with gun control being debated nationally, Foster sounded more militant still: “Now it looks like groups like ours are going to be called up to defend the Constitution even if it means using force.”