In recent months, Russia’s president, Vladimir Putin, has enacted a series of draconian laws targeting LGBT people and the so-called “homosexual agenda.” He’s outlawed “homosexual propaganda” in terms so vague that nearly any statement about LGBT people that falls short of outright condemning them may be prosecutable; banned the adoption of Russian children by couples in any country that permits same-sex marriage; and allowed for foreign nationals suspected of being gay or “pro-gay” to be arrested and detained. At press time, the Duma, Russia’s legislative body, was debating a bill that would enable the government to remove children from the homes of gay and lesbian parents.

In Russia, openly gay individuals report fearing for their jobs and lives in an environment in which, they say, violence against LGBT people is broadly accepted. Abroad, the laws have provoked condemnation from world leaders, including the United Nations’ Human Rights office and President Obama, as well as calls to boycott the 2014 Olympic games in Sochi, Russia. 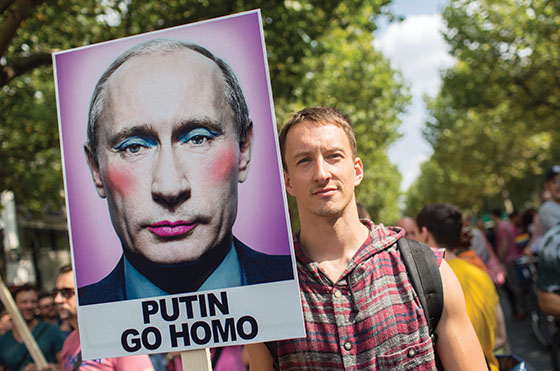 Russian President Vladimir Putin’s outlawing of “homosexual propaganda” and other anti-gay moves have prompted condemnation around the world, including at an August protest in Berlin. But American radicals like Scott Lively have done their best to portray Putin and his ilk as noble warriors battling LGBT “missionaries of evil.”
FLORIAN SCHUH/PICTURE-ALLIANCE/DPA/AP IMAGES

But those same laws have made Pastor Scott Lively — who helped lay the groundwork for Russia’s anti-gay laws in 2007 with a 50-city tour where he characterized the “homosexual political movement” as a “fast-growing social cancer” and explicitly called on the Russian government to “criminalize the public advocacy of homosexuality” — very happy.

Lively is a Springfield, Mass.-based anti-gay activist best known as the author of The Pink Swastika: Homosexuality in the Nazi Party, a discredited 1995 revisionist “history” which says the Holocaust was masterminded and carried out by gay men. In recent years, failing and often reviled at home, he’s taken his anti-gay crusade abroad. His influence has been evident in Belize, where American anti-gay activists are battling to keep a colonial-era law criminalizing “buggery” on the books. And, in 2009, Lively encouraged Ugandan authorities in drafting some of the world’s most draconian anti-gay legislation, including provisions that would have subjected people who had gay sex more than once to the death penalty. 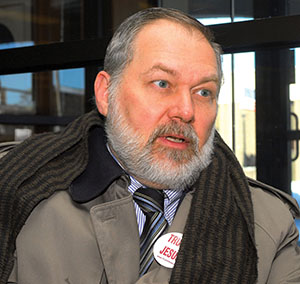 On July 22, Lively wrote an open “Letter to the Hungarian People” in which he said LGBT “missionaries of evil … follow the same strategy everywhere to homosexualize cultures.” First, they lay the groundwork with “heterosexual pornography” and propaganda devised to weaken marriage and social mores. Next, they spread the idea that people do not choose their sexual orientation (“a lie,” Lively says). Finally, they implement “sexual orientation regulations (SORS)” outlawing discrimination against LGBT people.

“These SORs are the seed that contains the entire tree of the homosexual agenda with all of its poisonous fruit,” Lively wrote. The only way to stop it is through “resolute and unapologetic discrimination” — where Russia, as he wrote, “is a model for the rest of the world.”