For the Radical Right, Obama Victory Brings Fury and Fear

When the word came in that Barack Obama and the Democrats had won national elections in a decisive victory, millions of Americans went to bed, satisfied that even if their candidate didn’t win, democracy had survived. The relatively lopsided results, both in the Electoral College and in several key Senate contests, made it clear that the November elections had in no way been stolen.

But not so at Ole Miss, which the prior month had marked the 50th anniversary of deadly segregationist riots on the Mississippi campus. Shortly after TV networks called the presidential race, a crowd of mostly white students protested furiously, chanting anti-black slurs and attracting hundreds more students during the ruckus. An Obama/Biden campaign sign was burned before campus police broke up the crowd in Oxford and arrested two students for disorderly conduct. 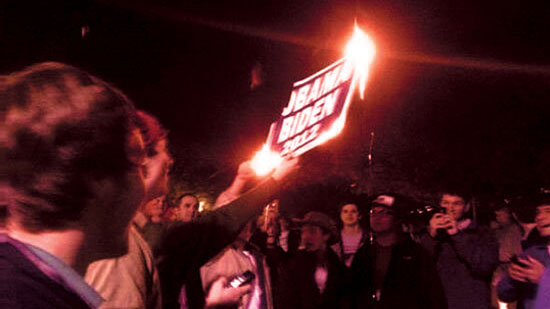 Rage on the right: Students at the University of Mississippi, reacting to the re-election of President Obama, burned an Obama/Biden campaign sign and chanted anti-black slurs.

Reaction to the re-election of our first black president from the radical right — and that seemed clearly to include a number of University of Mississippi students — ranged from sputtering rage and name-calling to cries for a new Southern secession, mass emigration to Europe, and even the break-up of the United States. There was one thing many people seemed to agree on: The changing racial demographics of this country, expected to lose its white majority by 2043, were key to the result.

“Welcome to a truly white minority world,” wrote one commenter on Stormfront, the world’s largest white supremacist Web forum, which is run by a former Alabama Klan leader. “The future is now. There is no denying this. The sun has set on humanity’s greatest era: 1500-2000. … [T]he only way to survive this war of annihilation is separatism. … [W]e have to choose regions or states.”

“We have truly fallen under God’s judgment,” wrote another. “You will never see another white man occupy the White House again.” Responded a third: “If you can immigrate [sic] to Europe you start making plans. … America will become largely a non-white population that is poverty stricken and all those government programs will soon disappear. It will happen. No more Medicare and no more social security.”

The impending loss of a white majority in the United States has helped drive a truly explosive growth of the radical right since 2008, when Obama first appeared on the national scene. Hate groups in recent years have risen to more than 1,000, and the number of antigovernment “Patriot” groups has shot up from just 149 in 2008 to 1,360 last year, according to the Southern Poverty Law Center. For much of 2012, groups on the radical right increasingly fretted about a possible Obama victory. Now that that has occurred, the radical right may grow more dangerous still. 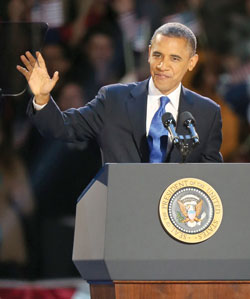 On Stormfront, given this reality, it wasn’t surprising to find talk of violence in the wake of the election. “I live in a liberal area so many of my ‘friends’ are shouting for joy,” lamented one poster at the racist site. “I don’t actually have many real friends and the ones I do have are scared and talking about arming themselves.”

Having a black rule us is very bad,” added another Stormfront poster. “It will almost certainly end in violence if we whites don’t get back in control.”

Over at conspiracist Alex Jones’ website Infowars, some reactions didn’t sound all that different. “Now is the time to leave this country,” wrote a commenter using the name munglejonkeys. “[T]hey have brought about a communist takeover without firing a single shot. America will resemble Zimbabwe (economically) in a few years and there will be a huge shift in the welfare-dependent knob-slobs who thought that selling their souls for an Obama-phone was such a great deal. … All because white people didn’t oppose political correctness 35 years ago.”

Others at Infowars posted the kinds of paranoid conspiracy theories that the site is best known for. “With his re-election in place,” a particularly fearful Mike Adams wrote, “expect Obama to start issuing a mass of ‘kill orders’ that will even start targeting political opponents.” Adams went on to fret about mandatory vaccines and Obama’s purported plans to “destroy the Second Amendment.”

Extremists weren’t the only ones talking about whites becoming a minority. Shortly before the election was called Nov. 6, Fox News’ Bill O’Reilly said, “The white establishment is now the minority. And the voters, many of them, feel that the economic system is stacked against them and they want stuff.” He added: “The demographics are changing. It’s not a traditional America any more.”

Donald Trump, the unrepentant billionaire “birther,” didn’t mention race. But he tweeted after the election was called that it had been “a total sham and a travesty. We are not a democracy!” He went on to describe the Electoral College, which gave the race to George W. Bush in 2000 even though the Republican lost the popular vote, as a “disaster for democracy.” He offered no complaints about 2000.

Joseph Farah, who runs the conspiracist “news” site WorldNetDaily, sounded similar. “I think things are going to get very tough in America over the next four years,” Farah warned. “I expect more division, more stratification, maybe even the disintegration of the constitutional republic that was the envy of the world for so long. It’s time to hunker down. It’s time to prepare for the worst — economically, militarily, socially, culturally. The revolutionaries have won a major political victory. The America haters are running the country for another four years.

“That is not a pretty prospect.”

The anti-gay right reacted with fury, as well. In a long thread on the passage of same-sex marriage referendums at the antigovernment site Free Republic, commenters were apoplectic — and frightened. “Get ready for God’s wrath,” wrote one. “The people are choosing Satan’s finest.” “Fudgies win again,” wrote another. “Incidents of HIV [to] rise again.” And a third: “America is going to pay for its unbelief and its love of abortion and homosexuals. … And IT DESERVES IT.”

“SICK SICK SICK,” wrote still another. “What a filthy night this election is.”

“Millions of Americans looked evil in the eye and adopted it,” said Mat Staver of the anti-LGBT Liberty Counsel. “Race and ethnicity overrode values.” He added: “More children will die. Marriage will come under greater attack. Immorality will be exalted. Sadly, the country could easily collapse under the weight of escalating economic debt. Islam will be emboldened. Our military will be weaker. Israel will not have as strong an ally… . The world will become a more dangerous place.”

In fact, as pointed out on CNN’s religion blog, the whole election was a “nightmare scenario” for conservative Christian leaders. Noting the approval of two same-sex marriage referendums, the re-election of a president who supported such marriages, and the rejection of hard-line anti-abortion candidates, CNN said the results “seemed to mark a dramatic rejection of the Christian right’s agenda.”

“The historic nature of these results are hard to overstate,” Robert P. Jones, a pollster who specializes in politics and religion, told CNN regarding the referendums in Maine and Maryland. “Given the strong support of younger Americans for same-sex marriage, it’s unlikely this issue will reappear as a major national wedge issue.”

There was also palpable anger among certain neo-Nazis directed at women, some 55% of whom voted for Obama. “The treacherous Jews understood how emotional and giving White women are and therefore targeted them from early age in indoctrination centers while emasculating our boys!” fumed one Stormfront poster. “It is sad to see how many White women are going against their interest and it isn’t just our American mudsharks either. I cannot tell you how many European chicks are paired up with coloreds. It is a very disturbing trend actually.”

“I find it exceptionally depressing that your statement seems to be true,” another commenter said. “Our own women are abandoning our race and betraying it in record numbers.” Lamented another in the same thread, “Women in general are very conformist and generally will do whatever they are told to do.”

What does all this portend for the next four years?

Non-Islamic domestic terrorism in the United States shot up in the wake of President Obama’s first election in 2008, spurred largely by fury over the “Kenyan” president and the racial change that he represents in the U.S. population. Now, given the reaction from the radical right to November’s election results, that seems likely to continue — or to get even worse, as racists and right-wing radicals seethe.

OK, now we have all seen the writing on the wall, AGAIN!” wrote one person in a Stormfront post that seemed to capture the general feeling of helpless rage. “The question is, What are we going to do about it? What is our plan?”