Capping four years of explosive growth sparked by the election of America’s first black president and anger over the economy, the number of conspiracy-minded antigovernment “Patriot” groups reached an all-time high of 1,360 in 2012, while the number of hard-core hate groups remained above 1,000. As President Obama enters his second term with an agenda of gun control and immigration reform, the rage on the right is likely to intensify.

The furious reaction to the Obama administration’s gun control proposals is reminiscent of the anger that greeted the passage of the 1993 Brady Bill and the 1994 ban on assault weapons supported by another relatively liberal Democrat — Bill Clinton. The passage of those bills, along with what was seen by the right as the federal government’s violent suppression of political dissidents at Waco, Texas, and Ruby Ridge, Idaho, in the early 1990s, led to the first wave of the Patriot movement that burst into public consciousness with the 1995 Oklahoma City bombing. The number of Patriot groups in that era peaked in 1996 at 858, more than 500 groups fewer than the number active in 2012.

For many, the election of America’s first black president symbolizes the country’s changing demographics, with the loss of its white majority predicted by 2043. (In 2011, for the first time, non-white births outnumbered the births of white children.) But the backlash to that trend predates Obama’s presidency by many years. Between 2000 and 2010, the number of hate groups rose from 602 to more than 1,000, where the count remains today. Now that comprehensive immigration reform is poised to legitimize and potentially accelerate the country’s demographic change, the backlash to that change may accelerate as well.

While the number of hate groups remained essentially unchanged last year — going from 1,018 in 2011 to 1,007 in 2012 — the Southern Poverty Law Center (SPLC) count of 1,360 Patriot groups in 2012 was up about 7% from the 1,274 active in 2011. And that was only the latest growth spurt in the Patriot movement, which generally believes that the federal government is conspiring to take Americans’ guns and destroy their liberties as it paves the way for a global “one-world government.” From a mere 149 organizations in 2008, the number of Patriot groups shot up to 512 in 2009, jumped again to 824 in 2010, and then skyrocketed to 1,274 in 2011 before hitting their all-time high last year.

Now, in the wake of the mass murder of 26 children and adults at a Connecticut school and the Obama-led gun control efforts that followed, it seems likely that that growth will pick up speed once again. 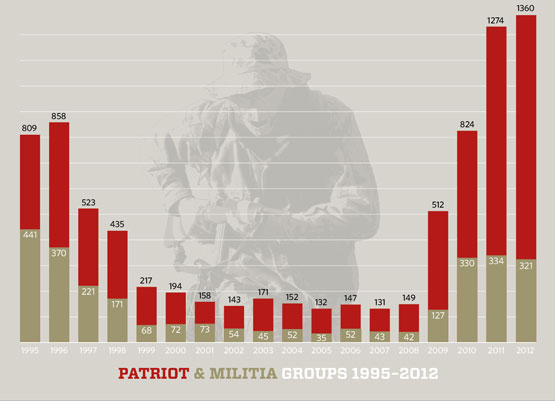 The Hysteria Mounts
Even before the Dec. 14 shootings at Sandy Hook Elementary School, gun and ammunition sales shot up in the wake of the re-election of the country’s first black president, the result of shrill conspiracy theories about Obama’s secret plans to confiscate Americans’ guns. When the killings actually did spark gun control efforts that clearly had not been in the Obama administration’s plans, the reaction on the political right was so harsh that it seemed to border on hysteria.

Sen. Rand Paul (R-Ky.) proposed a law that would nullify any executive gun control actions by Obama, accusing the president of having a “king complex.” U.S. Rep. Trey Radel (R-Fla.) said the president could be impeached for those actions. State lawmakers in Arizona, Mississippi, South Carolina and Tennessee proposed laws that sought to prevent federal gun control from applying to their states.

Richard Mack, a former Arizona sheriff who sued the Clinton administration over the Brady Bill’s imposition of background checks on gun buyers, claimed that of 200 sheriffs he’d met with, most “have said they would lay down their lives first rather than allow any more federal control.” Matt Barber of the anti-gay Liberty Counsel said he feared that the nation, which he described as already on the brink of civil unrest, was headed for “a second civil war.” “Freedom ends. Tyranny begins,” tweeted Fox News Radio host Todd Starnes. “Get ready,” TeaParty.org said. “Right now government gun grabbing plans are being covertly organized.”

“MARTIAL LAW IN THE UNITED STATES IS NOW A VERY REAL POSSIBILITY!” added the ConservativeDaily.com’s Tony Adkins, responding to Obama’s use of executive orders to further gun control with a doomsday prediction that could have come straight from the Patriot movement. “SUSPENSION OF THE U.S. CONSTITUTION IS A VERY REAL POSSIBILITY!” The Conservative Monster, a similar website, concluded that the president was conspiring with a variety of foreign enemies “to force Socialism on the American people.”

Even further to the right, the reaction was more intense yet (see also related story, p. 36). Chuck Baldwin, a Montana-based Patriot leader long associated with the Constitution Party, made the unusual claim that Christ had ordered his disciples to carry “their own personal arms” and vowed to refuse to register or surrender his firearms. The Oath Keepers, a conspiracy-oriented Patriot group of current and former military and law enforcement officials, issued a threat — “MESSAGE TO THE OATH BREAKERS AND TRAITORS: We will never disarm” — and added that gun control plans were “unconstitutional filth.” Judicial Watch founder Larry Klayman called the proposals “a declaration of war against the American people” and demanded “liberation” from the “evil clutches” of proponents.

The one sector of the radical right that shrank dramatically last year was the “nativist extremist” groups that go beyond advocating for immigration reduction and confront or physically harass suspected unauthorized immigrants. From a 2010 high of 319 groups, they fell over the following two years by about 90%, to 38 groups. The collapse was due to criminal scandals, internecine sniping within the movement, and the co-opting of their issue by state legislatures. 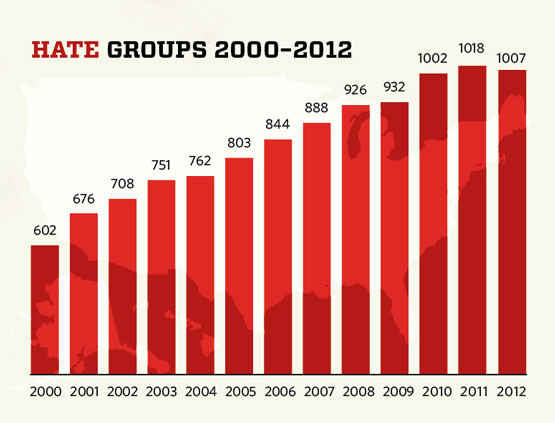 Progress and Backlashes
Even before serious talk of gun control began in Washington, the far right was already in something of a meltdown in the immediate aftermath of Obama’s re-election, which came to many who got their campaign news from right-wing sources as a jarring shock. Hundreds of thousands of Americans signed petitions seeking the secession of each of the 50 states. Right-wing outfits like TeaParty.org said a “Communist coup” was under way. The anti-gay Family Research Council charged Obama with “dismantling” the country.

Polling after the election showed how broad antipathy toward President Obama remained in a deeply polarized America. A Public Policy Poll survey found that 49% of all Republicans believed that ACORN — a community organizing group that went belly up in 2010 after attacks from the far right — had stolen the election from Mitt Romney. A quarter of GOP members in the same poll favored secession. A January 2013 poll from Fairleigh Dickinson University’s PublicMind project found that 36% of all Americans still don’t believe Obama is a citizen, despite the 2011 release of the president’s “long-form” birth certificate.

As they did in 2008 and 2009, groups on the radical right clearly benefited from that antipathy. “Since Obama’s first term, our numbers have doubled and now we’re headed to a second term, it’s going to triple,” one Virginia Klansman told WTVR-TV in Richmond. Daniel Miller, president of the secessionist Texas National Movement, said that his membership shot up 400% after Obama’s re-election. White News Now, a website run by white supremacist Jamie Kelso, said that it had had “an incredible year” in the run-up to the vote, reaching more people than ever.

To the surprise of many prognosticators, anti-black racism in America — not just that limited to the far right — actually rose over the four years of Obama’s first term, according to a 2012 Associated Press poll. The poll found 51% of Americans expressed explicitly anti-black attitudes, compared to 48% in 2008, while 56% showed implicitly anti-black attitudes, up from 49% four years earlier. Another AP poll, in 2011, found that 52% of non-Latino whites expressed explicitly anti-Latino attitudes, a figure that rose to 59% when measured by an implicit attitudes test.

“We have this false idea that there is uniformity in progress and that things change in one big step. That is not the way history has worked,” Jelani Cobb, a history professor and director of the Institute for African-American Studies at the University of Connecticut, told the Huffington Post with regard to the AP poll findings. “When we’ve seen progress, we’ve also seen backlash.”

Some broad social progress that did occur last year — the rapidly increasing acceptance of LGBT people and same-sex marriage — fueled just such a backlash among anti-gay religious groups that saw themselves beginning to lose the issue. (A DecemberUSA Today poll found that 53% of Americans now support same-sex marriage, up dramatically from 1996, when 27% supported such unions.)

The American Family Association issued predictions for the future that included the claims that conservative Christians will be treated like African Americans before the civil rights movement, that the state will take charge of children at birth, and that cities with names like St. Petersburg will be forced to change their names. Peter LaBarbera of Americans for Truth About Homosexuality said the 2012 election of openly gay Tammy Baldwin to a Senate seat representing Wisconsin signaled that America is “falling apart.” The volume of these kinds of comments seemed higher than ever before.

Conspiracies and Terror
Another factor driving the expansion of the radical right over the last decade or so has been the mainstreaming of formerly marginal conspiracy theories. The latest and most dramatic example of that may be the completely baseless claim that Agenda 21 — a United Nations sustainability plan that was signed by President George H.W. Bush but has no mandatory provisions whatsoever — is part of a plan to impose socialism on America and strip away private property rights.

That claim has been pushed heavily by, among others, the John Birch Society, a conspiracist Patriot organization that was exiled from the conservative movement a half century ago after claiming President Dwight D. Eisenhower was a Communist agent (see story, p. 24)."Last year, the Republican National Committee passed a plank opposing Agenda 21 and describing it as a “destructive and insidious scheme” to impose “socialist/communist redistribution of wealth.” The state of Alabama passed a law barring any policies traceable to Agenda 21 without “due process.”

The radical right last year produced more than its fair share of political violence. Most dramatically, a neo-Nazi gunman stormed into a Sikh temple in Wisconsin, murdering six people before killing himself. In Georgia, meanwhile, officials arrested 10 people, most of them active-duty military, who were allegedly part of a plot to take over the Army’s Fort Stewart, among many other things. The group is accused of murdering two former members suspected of talking.

Then, this January, an Alabama high school student was arrested for allegedly plotting to attack his black and gay classmates and bomb his school. Former friends of the student said he and a group of up to 11 other students regularly shouted “white power” and gave stiff-arm Nazi salutes in the halls of their Seale, Ala., school but were ignored by school officials and security officers.

These were only the latest incidents of just over 100 domestic radical-right plots, conspiracies and racist rampages that the SPLC has counted since the Oklahoma City bombing left 168 men, women and children dead in 1995.

Now, it seems likely that the radical right’s growth will continue. In 2012, before Obama’s re-election and the Newtown, Conn., massacre, the rate of Patriot growth had slackened somewhat, although it remained significant. Anger over the idea of four more years under a black, Democratic president — and, even more explosively, the same kinds of gun control efforts that fueled the militia movement of the 1990s — seems already to be fomenting another Patriot spurt.

Even before the election last year, self-described Patriots sounded ready for action. “Our Federal Government is just a tool of International Socialism now, operating under UN Agendas not our American agenda,” the United States Patriots Union wrote last year in a letter “sent to ALL conservative state legislators, all states.” “This means that freedom and liberty must be defended by the states under their Constitutional Balance of Power, or we are headed to Civil War wherein the people will have no choice but to take matters into their own hands.”