The world hadn't heard much in recent years from Tila Tequila, a minor celebrity of yesteryear. But then she began to write of the Hitler she loves, and why.

How bad was Adolf Hitler? Not so much, says Tila Tequila.

And she should know. After all, Ms. Tequila, née Tila Nguyen, is a woman of commanding achievements. She was the most popular person ever on MySpace (remember MySpace?), posed nude for Penthouse, Playboy and others, was a doper who ended up in rehab, hosted a strip-tease TV show that featured the “Pants-Off Dance-Off,” and recorded timeless romantic standards like “I F----- the DJ.”

She ran a dating site, was engaged to an heiress, accused her boyfriend of domestic violence but ended up owing him $2 million after failing to respond to his countersuit, made a lesbian sex tape, and played a Hooters waitress in a really, really bad movie (the execrable “I Now Pronounce You Chuck and Larry”).

Plus, she sometimes reads the Internet. 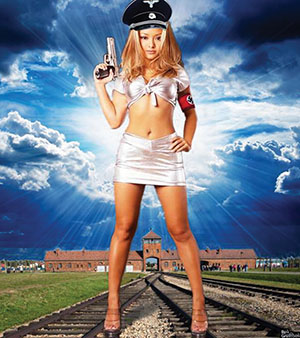 Apparently, that’s where she learned the truth about the führer, “a special and sweet kid who had a dream to become a painter,” as she wrote on her Facebook page in December. “Unfortunately, the art schools did not feel the same as he and they rejected him. Fast forward a few years later and he was roughed up and bullied on top of that by the same people he once loved. His Name was Hitler.”

The problem, the 32-year-old explained, is that the victors of World War II wrote the history, and the media lies. In reality, she noted, Hitler was a vegetarian, loved animals and children, was a “brilliant” artist, and saved his country, sort of.

“I understand the Jewish people went through some shit too, but hey guess what?? SO DID THE MAJORITY OF THE PEOPLE WHO SUFFERED IN EVERY SINGLE WAR THAT TOOK PLACE! You were NOT the only ones. So please, if the rest of us can forgive and forget maybe it’s time you do also!!!”

Tila’s got a few other unusual beliefs as well. You know, the normal type of thing for Deep-Thinking Celebrities of Yesteryear — she’s a goddess who’s “been around for 500,000 years”; she remembers past lives; she “knows” actor Paul Walker, who died in a fiery car crash on Nov. 30, was murdered; the “official story” of 9/11 is “absolute garbage”; there are “winged planets”; and so on.

But it’s Hitler who really turns her on.

“Hitler was a good man and it takes some f------ balls for someone to say this,” she wrote. She referred to herself as “Hitila,” a coupling, so to speak, of Hitler and Tila. She posted a Photoshopped picture of herself standing in front of the Birkenau death camp wearing an SS cap, a swastika, and not a lot else. And, in a new song, “It’s Going Down,” she refers to a related obsession, the Illuminati, a long-gone secret society that many conspiracy theorists believe secretly controls the world. She sings, “Jewluminati motherf------ hate me/Oh no they don’t wanna date me/Nor you nor you nor you too/Worldwide genocide blame it on the Jews.”

But isn’t Tila becoming a Jew? Well, no, that was way back in 2012, when she decided that Jews were cool and she began to study Hebrew and attend conversion classes. “I just feel like the Jewish people have such a beautiful way about them,” she chirped then, “and I can’t wait to officially be Jewish!” Unfortunately, she says now, the Jews responded to her newfound Judaism mainly by mocking her.

Much to Tila’s surprise, her rants met with some blowback.

After she had been pilloried and laughed at on pretty much every website to the left of, well, Hitler, she cut a new video responding to her many critics. In it, she said that it had all been “satire,” that she was being attacked by “New World Order Zionists” and “Zionist Jewluminatis” even though she “loves” all people, “just because I was sympathetic towards other human beings” — that is, Hitler.

She stopped several times in mid-video to sigh. “This is all very complicated,” she said with a frustrated look, “to try to explain.” The world is “an illusion,” she continued, “white magic” and human “super-abilities” are real, and we are all suffering because of “the sacred powers that God bestowed on to us that they stole, which they found under Solomon’s temple, or what the f--- ever.”

You see, it really is hard to explain.

In any event, Tila promised her viewers, she is not about to “lower myself to your level,” and instead will continue to speak out for the benefit of all of us, even the non-comprehending “sheeple.” “I’m speaking the truth,” she said.