Golden Dawn, Greece’s violence-prone neo-Nazi political party, has two more chapters of American members in the United States, according to an October report from the Anti-Defamation League. Joining a chapter in New York City, one of the new groups is in Los Angeles, while the second, known as the Regional League of the Western States, is not listed in any specific location.

The New York chapter appears to remain the most active chapter by far, with English-language material on its blog and calls to sympathizers to donate food and gift cards in order to help “Greek babies.”

Golden Dawn, which first registered as a political party in 1993, rocketed into worldwide headlines after it won 21 seats in the 300-seat Greek parliament in 2012 on an anti-corruption, anti-austerity and virulently anti-immigrant platform featuring the slogan “so we can rid this land of filth.” The party soon garnered more attention for its Nazi symbolism and anti-Semitic rhetoric. Members have held public rallies that feature the “White Pride Worldwide” logo on black flags and have been linked to violent acts in Greece, including brutal attacks on immigrants and storming marketplaces they suspect harbor undocumented vendors. 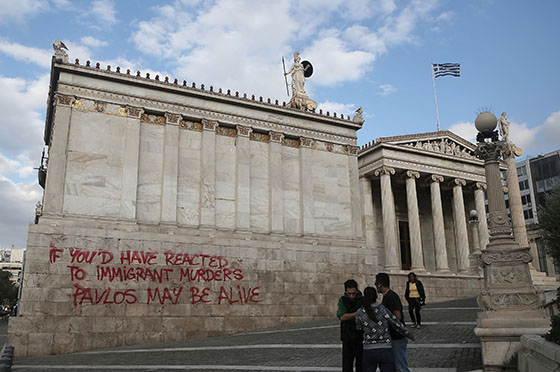 Last September, a self-confessed member of Golden Dawn was arrested in the murder of Pavlos Fyssas, Greece’s foremost hip-hop artist, who was also well known in the country’s active anti-fascist networks. In the wake of his death, Athenian police raided Golden Dawn offices and then arrested six lawmakers in the party, including its top two officials. Allegations against the party’s leadership include involvement in murder, attempted murder, possessing explosives, carrying out bombings and robbery.

Following the arrests, Prime Minister Antonis Samaras promised “zero tolerance” for the party, which has seen a fast rise in popularity in the last two years, capitalizing on Greece’s economic woes. Golden Dawn currently holds 18 seats in the parliament and polls at around 12%-15% popularity, a startling number given Greece’s history of anti-Nazi resistance during the German and Italian occupation of World War II.

Greeks created the most effective resistance movement in occupied Europe, ultimately forcing Italy to withdraw in 1943. German forces, however, exacted mass reprisals on hundreds of villages. Estimates suggest that tens of thousands of Greek civilians died at the hands of German occupiers. In spite of the risk, many Greeks harbored and protected its Jewish population, some of whom joined the resistance, which helped hundreds escape and survive.

Greece’s next national elections are scheduled for May 2014. Current polls suggest 10% of eligible voters are considering supporting Golden Dawn, which has publicly denied the Holocaust.