Nearly four months after the Southern Poverty Law Center first broke the story about Kimathi’s secret life as a ranting Internet racist, DHS and the Genie officially parted company on Dec. 6, his last day on the payroll.

Until then, Kimathi had been on paid administrative leave since late August, collecting his $115,000 salary even as he continued to operate and maintain his virulently racist website — War on the Horizon. The site advocates the mass murder of whites and the “ethnic cleansing” of “black-skinned Uncle Tom race traitors.” 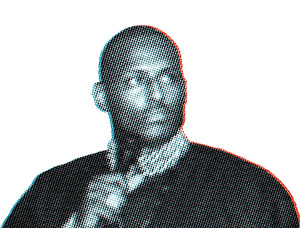 Kimathi had worked since 2009 for U.S. Immigration and Customs Enforcement (ICE), a division of DHS. He was a small business specialist in a unit that purchased items including handcuffs, ammunition and guns. His primary responsibility was outreach and recruitment of women and minority-owned companies. He had no direct role in buying bullets or anything else.

One of Kimathi’s former supervisors told Hatewatch last summer that Kimathi was “very good” at his job and that he “fights for the little guy.”

The supervisor added, however, that Kimathi was “filled with hate” and that his co-workers “are afraid he will come in with a gun someday and go postal. I am astounded he’s employed by the federal government, let alone Homeland Security.”

“It’s almost as if he has a split personality,” the former supervisor said.

Kimathi declined several requests to be interviewed. He did release a brief statement shortly after his separation from DHS.

“I spent the last (4) years at ICE building one of the strongest and most respected Small Business programs in the Federal Government,” the statement began. “In this time, with the help of a strong team of contracting professionals, I redirected hundreds of millions of dollars away from large, multi-billion dollar corporations into the hands of Small Businesses who performed exceptionally and saved the taxpayers millions of dollars.”

In the statement, Kimathi said he fought corruption inside ICE and that is why “the agency felt that it was time for me to go.”

Kimathi ended the statement with a flourish:

“The Irritated Genie of Soufeese. (Most Hated Black Man in amerikkka)”