White power music was in trouble. But then racist bands discovered iTunes, and now they're back in business.

The racist music industry, a once lucrative source of funding for the white power movement, is a shadow of its former self. Over the past decade, it has become increasingly fragmented and disorganized in the wake of the collapse of several major labels and distributors. Concerts have become scarce and those that remain have been driven even further underground. However, the ever-resilient white power music scene has found new hope and new profit amidst the wreckage of a once multimillion-dollar industry from an unlikely source: the world’s largest music vendor, iTunes.

The digital media marketplace, owned by Apple Inc., boasts the sale of more than 21 million songs every week, from a catalog of more that 26 million songs that, as of September 2014, included at least 54 racist bands.

The catalogs of bands from across the spectrum of hate music, ranging from established acts like Skrewdriver, the Bully Boys and Max Resist to little-known, DIY groups, can be purchased as MP3s or streamed with iTunes’ radio service with ease. Providers of MP3s receive a wholesale payout of 70 cents per song and $7 per album sold, as well as an additional fee per play through the iTunes Radio interface and a proportionate share of monthly advertising revenue.

The iTunes legal department did not respond to multiple requests for comment.

Where does this money go? Directly into the war chests of the individuals and organizations promoting racism and violence against minority groups both in the United States and abroad.

According to the terms and conditions of Apple’s iTunes marketplace, the usage of their service certainly appears to be off limits to racist bands.

Apple has a reputation as a hip, progressive company, but that hasn't stopped its iTunes operation from selling the music of violently racist bands like The Bully Boys, Max Resist and Skrewdriver.

“You agree that any use by you of such features, including any materials submitted by you, shall be your sole responsibility, shall not infringe or violate the rights of any other party or violate any laws, contribute to or encourage infringing or otherwise unlawful conduct, or otherwise be obscene, objectionable, or in poor taste,” reads a section titled “Submissions to the iTunes service.”

Other tracks make even less of an effort to hide their themes and motives. Another Bully Boys song titled “Jigrun” openly advocates violent hate crimes: “We’re going on the town tonight / Hit and run / Let’s have some fun / We’ve got j------- on the run / And they fear the setting sun.”

An Industry in Disarray

The United States, with its free speech protections, has become a bastion for racist music since the European scene was driven underground with laws making the music and its distribution illegal. Even in the United States, though, distribution in recent years became disorganized and limited. Major labels such as Resistance and Panzerfaust Records collapsed, leaving only a rotating cast of small distributors, often using mail-order systems, that advertise through racist Web forums like Stormfront and the Vanguard News Network Forum to attract a client base.

As recently as September 2014, Micetrap Records, a distributor with one of the largest remaining catalogs, ceased operations and took its store offline. However, with the emergence of music marketplaces like iTunes, distribution has become more effective and profitable.

In the 1990s, the racist music business grew into a multimillion-dollar industry. Labels like Resistance Records, which was bought in 1999 by the National Alliance, formerly the most prominent neo-Nazi organization in the United States, were reportedly selling upwards of 70,000 CDs annually by the early 2000s.

While the production and distribution of hate music has stalled since then in terms of physical sales, iTunes is providing a new and unprecedented tool to effectively distribute hate music, and with it the ideology required to recruit new supporters.

William Pierce, the Alliance’s late leader, once said of racist music: “All too often we turn [our anger] against ourselves. We need to give a proper direction to that anger. … [Resistance Records will distribute] music of defiance and rage against the enemies of our people. … It will be music of the great, cleansing revolution which is coming.”

Historically, racist music has been one of the most effective tools for skinheads and other racist extremists to raise money and recruit new, particularly young, members.

In the film “Hearts of Hate: The Battle for Young Minds,” George Burdi, former front man for the racist band RAHOWA (after a racist slogan that is short for “Racial Holy War”), extolled the importance of racist music in the recruitment of young racists.

“We hear the slogan, ‘White people awake, save our great race,’ twice per chorus, eight times in total through an entire song and, if they play that tape five times a week and just listen to that one song, they’re listening to ‘White people awake, save our great race’ 40 times in that one week, which means 160 times a month and you do the math beyond that.” 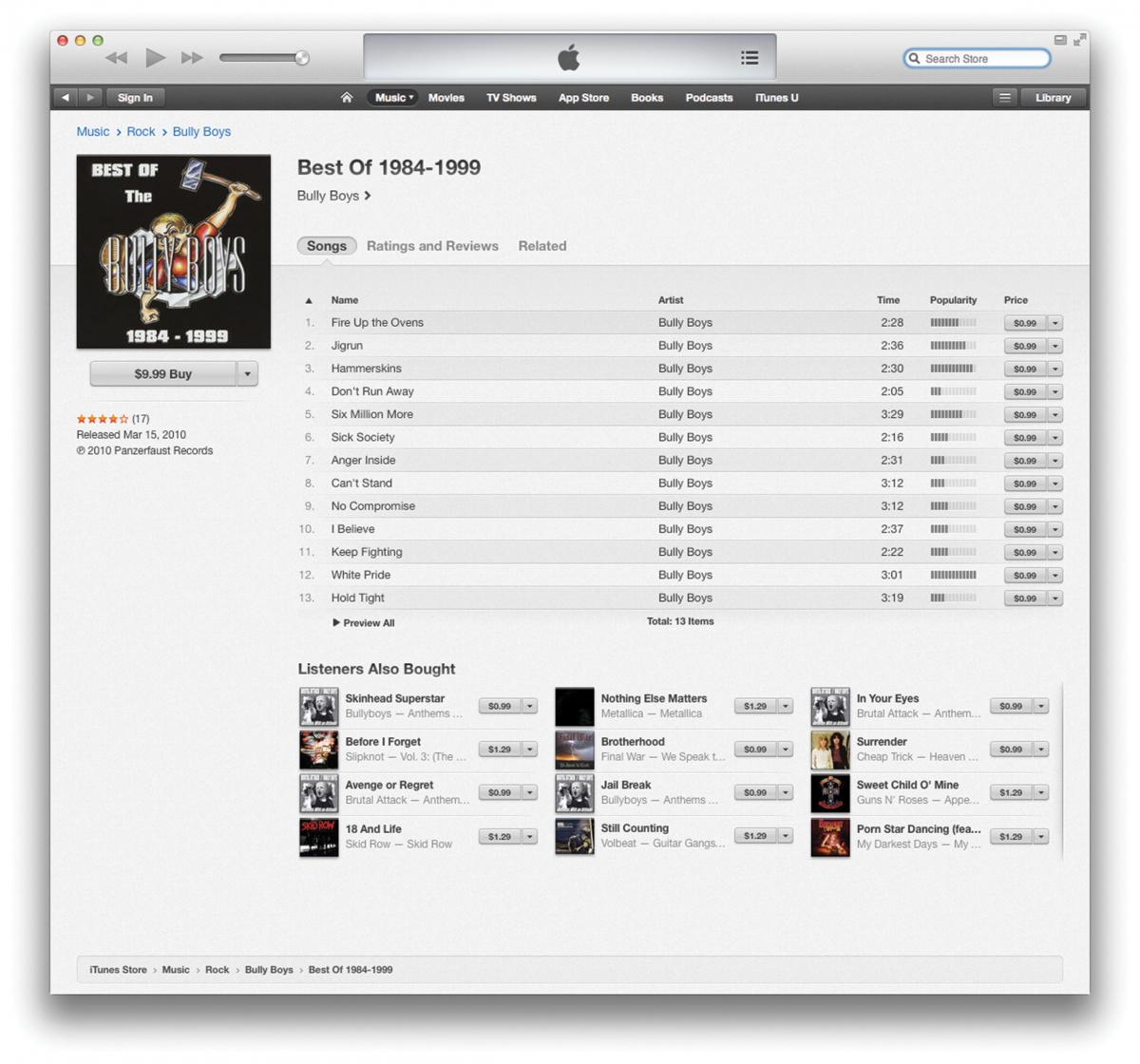 “The way that that movement has sold music has always been ahead of the curve in some ways,” says Aaron Flanagan, director of research for the Center for New Community, an anti-racist group based in Chicago. “The Burdis and the Pierces saw the Internet as a place where recruitment was possible, and they’ve long known that music was a main avenue for their message as it related to connecting people to a community that could solidify them within that movement.”

iTunes, which boasts the largest customer base of any music vendor, provides unrivaled exposure to not only adults, but minors age 13 and up — a troubling feature given the recruitment potential of such songs.

“The scary thing about iTunes,” says Flanagan, “is that it places [racist music] in this forum, that companies like Apple are brilliant at, creating a marketplace that pushes these cultural products closer to the consumer and facilitates the purchasing of them in ways that are so intuitive.”

Built-in features such as iTunes’ “Listeners Also Bought” section help promote similar artists to those a shopper already listens to. For instance, a query for Skrewdriver in iTunes leads to suggestions that a shopper also purchase albums by Brutal Attack, Final War, Bully Boys and other hate bands. What’s more, a shopper may be recommended a hate band after browsing the catalog of a non-racist hardcore or metal band, a type of exposure that has never before been so openly available for an insular music scene that has depended on word of mouth to gain popularity.

While it is unknown exactly how much revenue hate music is generating through iTunes sales, it is clear that what was formerly one of the most important arms of the white power movement is now making full use of the iTunes platform. What remains to be seen is whether iTunes will take action. Until then, hate music and its message will continue to prosper with the help of one of the world’s largest companies. 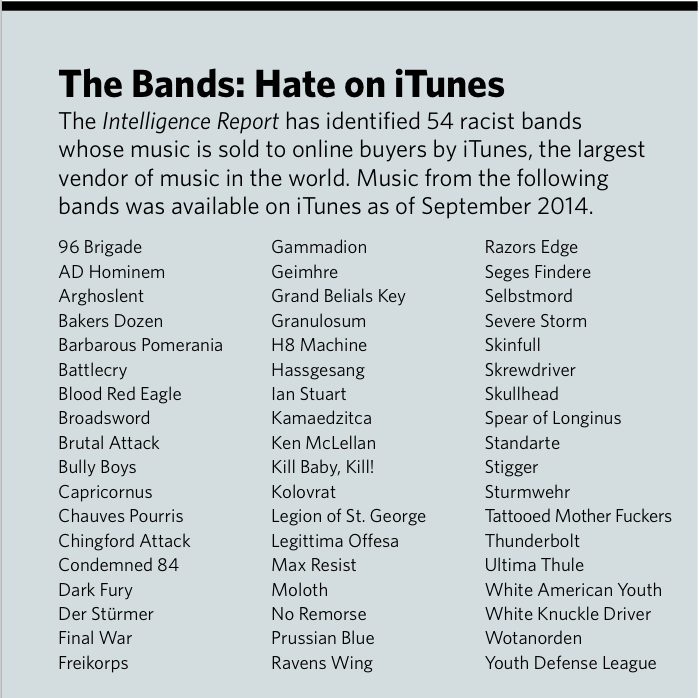