It’s been a bad few months for the man who would be mayor.

Longtime neo-Nazi Craig Cobb spent much of 2012 and 2013 quietly buying up a dozen properties in tiny Leith, N.D., in the hope of moving in fellow white supremacists, turning the town into an all-white enclave, and renaming the place that the last census says had a mere 16 residents “Cobbsville.”

But then the Southern Poverty Law Center and The Bismarck Tribune broke the story, and in late August it landed on the front page of The New York Times. From there, after Cobb’s five minutes of fame, it all went south.

Cobb was fired from his Border States Paving job. A fellow white supremacist who had moved into Cobb’s ramshackle house was yanked from a City Council meeting after what the Tribune characterized as a “venomous drunken tirade” so foul-mouthed that parents fled with their children’s ears covered. 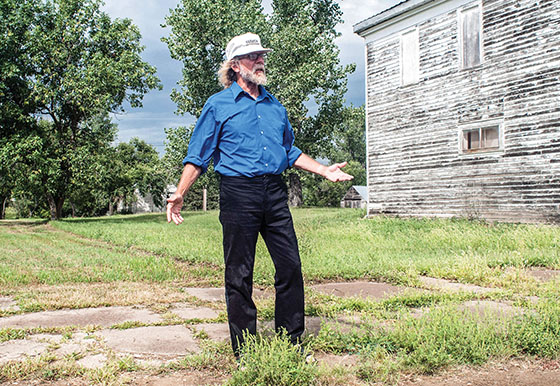 Two weeks later, the City Council approved a uniform building code, including new sewer and water requirements, that would force Cobb to spend a small fortune to make his properties legally inhabitable.

And Cobb made the hard-to-believe decision to go on NBC’s “The Trisha Goddard Show” after submitting to a DNA test. There, in front of a delighted audience, Goddard opened the envelope to reveal that Cobb was “86% European and 14% sub-Saharan African.” A dismayed Cobb muttered later that even if it were true, he could still work as “a border guard for the purebreds.”

When Cobb returned to Leith, he found his house vandalized with anti-racist graffiti. He and housemate Kynan Dutton responded by marching around town with long guns, threatening and cursing residents. Dutton’s proud girlfriend conveniently filmed their strut, but that video was seized as evidence to support the seven felony charges of terrorizing rapidly leveled against the men.

After bail was initially denied them, Cobb went on a hunger strike, offering to leave North Dakota and even the country if only the authorities would drop the charges that could bring him 35 years.

There were no takers. Instead, Cobb was sent off for mental evaluation.

Through it all, the highly obnoxious Cobb managed to drive off a series of court-appointed lawyers. At press time, he was on his fourth.

At the same time, the city was moving to demolish his home under the new building code. “Tomorrow wouldn’t be soon enough,” Mayor Ryan Schock said.

With her boyfriend Dutton in jail and herself living alone in Cobb’s house without heat or water, an unhappy Deborah Henderson told the Tribune that she and her three kids would like nothing better than to depart Leith.

“The Leith movement is over,” she sighed, adding that she was living on welfare, didn’t have the money to go home, and was being subjected to mean comments by locals. “There is no more white enclave,” she said.