In many ways, it was the tragic culmination of a life defined by seething racist and anti-Semitic hate.

Yet when Frazier Glenn Cross, a well-known neo-Nazi who changed his last name from Miller after testifying against fellow racists in 1988, strode on to the grounds of a Jewish community center in a suburb of Kansas City, Kan., and allegedly killed two people before moving on to a Jewish retirement home and killing another, it came as a complete surprise.

Despite almost five decades as a violent white supremacist, Cross, 73, had given out no obvious signal of his alleged intentions before the April 13 slaughter. 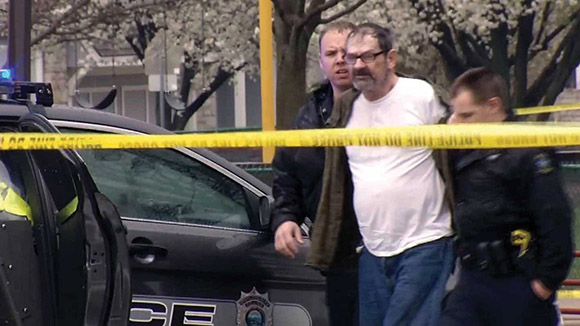 Frazier Glenn Cross was apprehended only minutes after allegedly murdering three people, including a 14-year-old boy, who he apparently mistakenly believed were Jewish. Earlier in his nearly six decades as a white supremacist, Miller led a paramilitary group called the Christian Knights of the Ku Klux Klan and plotted to assassinate Morris Dees, the co-founder of the Southern Poverty Law Center. KCTV-5/AP IMAGES/UNCREDITED

Cross, of Aurora, Mo., was charged with capital murder for the killing of a 14-year-old boy and his grandfather and one count of first-degree, premeditated murder for the death of a woman visiting her aged mother. He was captured almost immediately at a nearby school without resistance, yelling “Heil Hitler” minutes later as he sat handcuffed in the back seat of a police car.

As it turned out, all three victims were Christians.

Cross had been involved with racist groups since his early twenties, and founded the Carolina Knights of the Ku Klux Klan in 1980. He was sued by the Southern Poverty Law Center (SPLC) for harassing African Americans and operating a paramilitary organization and eventually agreed to desist. But he violated that court agreement by receiving stolen arms and military training from active-duty soldiers and Marines from Fort Bragg and Camp Lejeune and was found in criminal contempt as a result. He was sentenced to a year in prison, with six months suspended, but apparently feared additional charges.

Cross went underground while his conviction was under appeal but the FBI captured him months later hiding out with other Klansmen and a major weapons cache in Missouri. Although he was initially charged with conspiracy for plotting robberies and the assassination of SPLC co-founder Morris Dees and could have faced decades in prison, he wound up serving only three years after agreeing to testify against other racist leaders in a 1988 sedition trial in Fort Smith, Ark. That proceeding ended with all 14 defendants acquitted of all charges.

While he remained an enemy to many white supremacists because of his testimony, Cross in recent years became one of the largest financial backers behind Alex Linder’s anti-Semitic Vanguard News Network, where he has posted more than 12,000 times using the name “Rounder.” He also printed and distributed Linder’s neo-Nazi newsletter, The Aryan Alternative.

There was no clear explanation for why Cross allegedly decided to act on his hatred of Jews. It may be that he was old and suffering from emphysema and wanted to go out in a blaze of glory. He may have wanted to finally prove to fellow racists that he wasn’t a snitch and was willing to kill for the movement. He may have been paying tribute to Joseph Paul Franklin, a Cross friend and racist serial killer who was put to death in November. The day of the Kansas killing spree would have been Franklin’s 64th birthday.

But none of that is certain. And Cross has offered no clues beyond his well-known hatred.

Last fall, Cross spoke several times by telephone to Heidi Beirich, director of the SPLC’s Intelligence Project, boasting of beating up “n----- f------” and accusing her of supporting “anti-white genocide.” When Beirich told him that the SPLC was trying “to stop people like you who want to kill Jews,” he responded with apparent incredulity: “Who the hell is killing Jews? Who’s exterminating Jews?”