A mass murder in California throws a harsh light on the world of women-hating ‘men’s rights’ activists. It’s not a pretty sight.

America’s latest mass murder left seven people including the killer dead, the campus of the University of California, Santa Barbara, and the nearby community of Isla Vista in shock, and the so-called men’s rights movement, which some blamed for the slaughter, defensive, angry and resentful — its usual attitude.

It didn’t take long after 22-year-old Elliot Rodger stabbed and shot six people to death, injuring another 13 before committing suicide as police closed in, for the world to learn of Rodger’s hatred of women. He left behind a 140-page manifesto, an explanatory YouTube video entitled “Elliot Rodger’s Retribution,” and postings across the Internet that all testified to his burning misogyny. 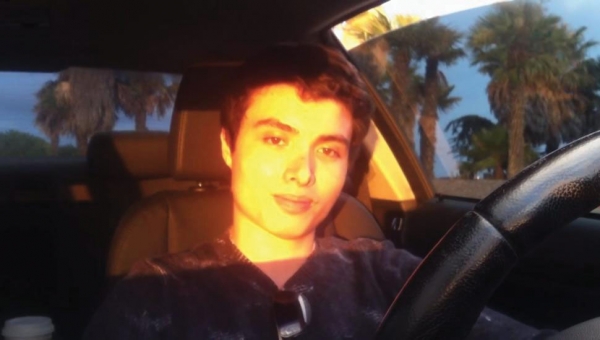 “You girls have never been attracted to me,” Rodger said in the chilling and self-pitying monologue he recorded and uploaded to YouTube minutes before the killing began on May 23. “I don’t know why you girls aren’t attracted to me, but I will punish you for it.” The self-described virgin then went on to describe how he intended to go to the UCSB’s “hottest” sorority house on his “day of retribution” and “slaughter every single spoiled, stuck-up blonde s--- I see inside there.”

Rodger, who was himself the highly privileged son of “Hunger Games” assistant director Peter Rodger, was nearly as good as his word. Although he didn’t make it into the sorority house because no one answered the door there, he did manage to murder all three of his male roommates, two sorority women and a young man, all six of them UCSB students. He injured another eight people with gunfire, hit several more with his car, and shot it out with the authorities twice.

Before he shot himself in the head, Rodger had posted a great deal of material reflecting his obsessive hatred of women, and he also repeatedly ranted against the black, Indian and Asian men he saw as undeserving of sex with white women — despite the fact that his own mother was Malaysian. It also quickly emerged that he had been treated for mental health problems for many years, was extremely isolated socially, but still saw himself as “the supreme gentleman” who was unfairly denied what he viewed as his right: sex with beautiful, blonde women.

The authorities said that Rodger appeared to have been planning for his deadly rampage for at least a year, legally buying three handguns and training at a local firing range. In November, on a website called PUAHate.com, he wrote of going on the offensive: “If we can’t solve our problems we must DESTROY our problems,” he said, going on to urge men to “overthrow this oppressive feminist system.” He added: “Start envisioning a world where WOMEN FEAR YOU.”

Rodger’s postings at PUAHate immediately focused public attention on the so-called “manosphere,” an ugly subculture of websites run by men’s rights activists that is typified by its loathing for women in general and feminism in particular. (PUAHate is dedicated to criticizing “pick-up artists” who sell men advice on how to bed women and fail to deliver, but it is dominated by vicious attacks on women.) Although these sites and some real-world men’s rights groups certainly have some legitimate complaints about family courts, sexual abuse of men and the like, the tone of many of them is remarkable for its woman-bashing, sex-starved flavor.

The manosphere was explored in an Intelligence Report article more than two years ago, but most Americans had never heard of it when Rodger’s rampage burst into the news cycle. Still, it didn’t take long for a national debate to develop about the role of the men’s rights movement in Elliot Rodger’s mass murder.

While some commentators focused on the issues of gun control and mental health, enormous numbers of women wrote about their experiences of misogyny and sexism under the Twitter hashtag #YesAllWomen — 65,500 of them per hour at their peak two days after the killings. Major news outlets wrote lengthy pieces about the manosphere and men’s rights movement, along with speculation about the role they played in Rodger’s thinking. And men’s rights activists went into overdrive, arguing furiously that they had nothing to do with the bloodbath in Isla Vista.

They had of a point, kind of.

The manosphere did not create Elliot Rodger — that much seems clear. Rodger was mentally ill, and he developed his obsessions with women over the course of many years. He was bullied badly in school. But it seems undeniable that PUAHate and very likely other websites in the manosphere reinforced Rodger’s mindset, telling him, in effect, that he was perfectly right to be enraged at half the human race. Men’s rights activists did not tell Rodger to kill — but in their writings, it seems like many of them wouldn’t mind doing some killing of their own.

Rodger said as much in his manifesto, writing that PUAHate “confirmed many of the theories I had about how wicked and degenerate women really are” and showed him “how bleak and cruel the world is due to the evilness of women.”

As this often angry debate unfolded, it quickly came to light that a men’s rights conference — the first International Conference on Men’s Issues — had been scheduled for June some six months earlier. As reporters made plans to cover the conference that would have been of little interest had it not been for the Isla Vista murders, conference organizer Paul Elam worked to pretty his movement up.

He had already begun that effort. In early May, weeks before Rodger’s rampage, the proprietor of the manosphere site A Voice for Men took down his most obnoxious Internet project, a site called Register-Her.com. That site featured photos of women hated by Elam and his ilk, including women convicted of crimes, women who supposedly had brought false accusations of rape, and women who expressed feminist ideas, all alongside the site motto: “Why are these women not in jail?”

Now, Elam E-mailed the almost 200 people planning to come to his June conference in Detroit — a fading industrial city chosen because it represented “masculinity” — to warn them to be on their very best behavior. Anyone “trash-talking women” or “making violent statements, even jokingly” would be summarily thrown out, he warned. Enemies of the men’s rights movement, Elam continued, “will be looking for anything they can to hurt us with. They will be listening, eavesdropping, and if they can, gathering things to harm us with.” The man who two years ago was posting photos of women who had committed “offenses against men” and vowing to “f--- their shit up” even told arriving conference-goers that his goal was to “build bridges between men and women instead of walls.”

That didn’t sound too much like the Paul Elam who has emerged as probably the best-known men’s rights activist in the United States. It wasn’t long ago that he declared October to be “Bash a Violent B---- Month,” explaining, “I mean literally to grab them by the hair and smack their face against the wall.” Elsewhere, he asserted that many women who are raped asked for it, saying “women who act provocatively; who taunt men sexually, toying with their libidos for personal power and gain, etc., have the same type of responsibility for what happens to them as, say, someone who parks their car in a bad neighborhood with the keys in the ignition.”

“A lot of women,” he continued, “get pummeled and pumped because they are stupid (and often arrogant) enough to walk through life with the equivalent of a I’M A STUPID, CONNIVING B---- — PLEASE RAPE ME neon sign glowing above their empty little narcissistic heads.” Elam has misleadingly cited certain research to make the claim that 40% to 50% of rape allegations are false. But the best scholarly studies show that between about 2% and 8% of such allegations are actually false — a rate that is comparable for false allegations of most other violent crimes.

In the end, Elam’s conference was in fact relatively subdued, although he claimed he had to spend $25,000 on security because of death threats from the movement’s enemies. Most of the speakers — almost all of whom had made far worse comments in other venues — kept their vitriol to a minimum. Some, like the speaker discussing men’s grief, even contributed some useful ideas.

But that didn’t negate a basic lesson of the whole Santa Barbara tragedy. Just as white supremacist websites help fuel the violence of professional racists, and just as the propaganda of the militia movement has nurtured terrorist attacks by so-called “Patriots,” the manosphere and what Elliot Rodger characterized in his manifesto as its “War on Women” provides moral support to angry and violent Americans.