Things have continued to fall apart for Craig Cobb, the feckless white supremacist who once dreamed of making the tiny town of Leith, N.D., his own personal lebensraum, the Nazis’ word for Aryan “living space.”

On Feb. 27, Cobb, 62, pleaded guilty to one count of felony terrorizing and five counts of misdemeanor menacing in connection with his Nov. 16 “safety patrol,” a profanity-laced hate parade that consisted of Cobb and roommate Kynan Dutton, 29, marching around Leith with rifles and hurling threats and insults at astonished townspeople.

Even the folks on Stormfront, the Internet’s most prominent white nationalist forum, disapproved of Cobb’s stunt. “It seems to me like this was not a very smart use of firearms even if it was legal. It gives the advantage to the enemy,” wrote forum member “TrojanCowboy.” 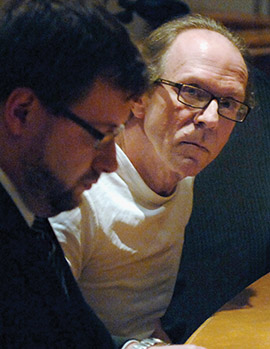 That’s for sure. Cobb and Dutton were arrested that very evening, charged, and imprisoned at the Mercer County Jail, where Cobb commenced a hunger strike that he described as the first step in a spiritual journey that would end in his death.

It ended instead with a psychological evaluation at a state mental hospital, after which Cobb was returned to jail. Days after Christmas, a judge set Cobb’s bond at $1 million, citing public safety concerns and the fact that Cobb is wanted in Canada on criminal hate speech charges. Unsurprisingly, the white supremacist — who at one point offered to leave North Dakota forever if the district attorney agreed to drop charges (that didn’t happen) — was unable to pay. That bond was later reduced, but Cobb was still unable to get out.

At press time, a plea agreement calling for time served and four years of probation was in the works, pending the results of a presentence investigation ordered by the judge. Dutton, who pleaded guilty in January to several charges of menacing and disorderly conduct, was given a suspended sentence and time served after agreeing to testify against Cobb.

Meanwhile, in early March, Leith Mayor Ryan Schock (who Cobb had planned to unseat) told The Associated Press that Cobb had formally divested himself of Leith, deeding six properties that remained in his possession back to the town at no charge. Other properties remain in the hands of Cobb’s white supremacist pals, including National Socialist Movement Commander Jeff Schoep, White Aryan Resistance founder Tom Metzger, and neo-Nazi Web activist Alex Linder, none of whom has shown any inclination to move to Leith.

At the same time, Dutton and his girlfriend Deborah Henderson moved to a rental house in Underwood, N.D., about 125 miles north of Leith. When rumors started that they were again planning a white supremacist takeover, Henderson immediately went public, saying they just wanted to be “left alone.”