ACT! for America now claims that its only concern is ‘radical’ Islam. But that’s not what a history of its founder suggests

In a Baptist church here long after the day’s services have ended, about two dozen members of ACT! for America stir in the pews waiting for a presentation on a threat they fear is growing quickly in America. This threat, they believe, lurks in nearly every mosque, in the Koran and, above all, in the tolerance America affords Muslims.

The night’s speaker is Bill French, a last-minute replacement for Robert Spencer, who runs the website Jihad Watch, one of the major Internet portals for anti-Muslim speech. French, too, is a major player in the movement; his Center for the Study of Political Islam serves as a think tank guiding populist anger against Islam through a “scholarly” interpretation of the Koran.

But on this night, his attention has turned away from textual analysis and toward talk of an ideological war in a speech entitled “Persuading the Near Enemy.”

“We have two enemies,” says French, a former Tennessee State University physics professor. “We have Islam, which is the far enemy, and then we have the near enemy — the professors, the person at work, the cousin who doesn’t want to listen.” Audience members, all part of the local ACT chapter in Nashville, respond with periodic whispers of “Amen.” 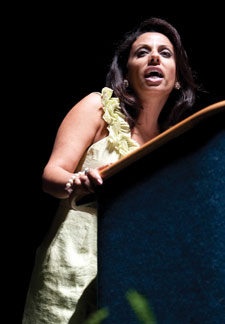 Brigitte Gabriel rocketed into the media spotlight after publishing two controversial books portraying Islam as a threat to America. A Lebanese Christian who appears frequently before conservative and Christian groups, Brigitte Gabriel once referred to Arabs as “barbarians.” The New York Times Magazine described her as a “radical Islamophobe.” MATT NAGER/THE NEW YORK TIMES/REDUX

Since ACT started in 2007 in the spare bedroom of founder Brigitte Gabriel’s home, the group has eagerly tapped into a groundswell of anti-Muslim rage and done what it could to fan the flames. It claims to have an astounding 180,000 members organized into 573 chapters across the nation, with more coming on monthly. By far, the largest chapters are here, in Tennessee, which ACT leadership calls the “tip of the spear.” Chapter members have successfully lobbied the state to pass two bills: one prohibiting courts from recognizing Islamic Shariah, or religious law, a largely symbolic piece of legislation; and another giving the state greater say in how political refugees are resettled. The group has also taken on the Islamic Center of Murfreesboro, Tenn., a frequent lightning rod of anti-Muslim sentiment.

Gabriel, who is closely aligned with the American political right on many fronts, has repeatedly made statements that conflate all Muslims with terrorists. (“Islamic terrorists … are really just very devout followers of Muhammad,” she wrote in 2006. “They are following his example and doing exactly what the Koran teaches and their mullahs exhort them to do.”) She angered a Jewish audience in a 2004 speech in which she reportedly referred to Arabs as “barbarians,” prompting a public apology from her hosts. The New York Times Magazine has described her as a “radical Islamophobe,” and even a publicist for one of her books cheerfully called her views “extreme.”

During a 2007 lecture Gabriel gave to the Defense Department’s Joint Forces Staff College as part a course on Islam, for example, she reportedly told U.S. military and national security personnel that Muslims should be prohibited from serving in public office on the basis of their faith. “If a Muslim who has — who is — a practicing Muslim who believes the word of the Koran to be the word of Allah, who abides by Islam, who goes to mosque and prays every Friday, who prays five times a day — this practicing Muslim, who believes in the teachings of the Koran, cannot be a loyal citizen to the United States of America,” she said.

Gabriel, a Lebanese Christian whose real name is Hanah Kahwagi Tudor, started the group in 2007, a year after publishing Because They Hate: A Survivor of Islamic Terror Warns America. The book was a call to action based on the “truth” behind Islam she says she learned about as a child during the civil war in Lebanon. She followed that book in 2008 with They Must Be Stopped: Why We Must Defeat Radical Islam and How We Can Do It. (From the introduction: “In the Muslim world, extreme is mainstream.”) The books were hugely controversial but shot Gabriel into the media spotlight to offer “expert” opinion on Islam and what ACT calls the “secret Islamification” of the West.

This March, Gabriel told The New York Times: “America has been infiltrated on all levels by radicals who wish to harm America. They have infiltrated us at the CIA, at the FBI, at the Pentagon, at the State Department.” The message was offered again on the ACT website. “Tens of thousands of Islamic militants now reside in America, operating in sleeper cells, attending our colleges and universities. … They are here — today.”

That was the underlying message of ACT’s National Conference and Legislative Briefing, held this June in Washington, D.C. The three-day conference combined the fanfare of a candidate’s barnstorming tour with the rhetoric that was pervasive across the political spectrum following Sept. 11, 2001. (The conference also included panels with at least one radical-right propagandist. Cliff Kincaid, an official of the extremist Accuracy in Media who has long vilified the LGBT community and, more recently, Muslims, gave a presentation on Al Jazeera. “It’s Jihad TV,” he said. “It’s the voice of Islamic terrorism.”)

During a private legislative briefing in the basement of the Capitol, congressmen — many of them rising stars in the Tea Party movement where Gabriel has made many inroads — spoke freely about the danger supposedly posed by Muslims. “This jihadist, Islamist, terrorist ideology, it is more dangerous than the Nazi ideology,” Rep. Trent Franks (R-Ariz.) told about 250 ACT members who attended. “As evil as the Nazis were, they wanted to live.”

ACT defends itself against charges of broad-brush hatred of Muslims by claiming to promote the efforts of “reformist” Muslims such as Tawfik Hamid, an Egyptian author who opposes Islamic fundamentalism. In 2009, Hamid wrote a piece in the Wall Street Journal calling on Islam to prove its peacefulness. The same year, in a column written for The Washington Examiner, Hamid was one of the first to spread the groundless fear of Shariah law. “Concessions to Islamic Shariah law can serve as a provocation to radical Islam, as it gives the radicals the impression that the West should bow to their Islamic laws.”

If that’s the work ACT endorses as proof of its moderate views, it seems hard to disagree with the conclusion of a March 2011 New York Times profile of Gabriel: “She presents a portrait of Islam so thoroughly bent on destruction and domination that it is unrecognizable to those who study or practice the religion.”