‘Patriots’ in Texas worry that Walmart and FEMA are conspiring to impose martial law. The governor isn’t taking any chances

You can find just about anything at Walmart these days: clothes, groceries, electronics — and secret underground internment camps, at least according to one doozy of a conspiracy theory that is stampeding across Texas, threatening to trample any and all horse sense in its path.

“Jade Helm 15” is the name of an eight-week United States military training exercise scheduled for this summer in Texas and several other southwestern states. But for a sizable chunk of folks in the Lone Star State and on the Internet, Jade Helm is a practice run for tyranny — and Walmart is at the heart of the plot.

Walmart closed five stores earlier this year in Texas, Oklahoma, Florida and California for what the retail giant said was six months of plumbing-related renovations. The New York Times reported that some of the 2,200 workers laid off by the move said the stores were actually closed “in retaliation for a history of labor activism at one of the shuttered stores in Pico Rivera, Calif.” 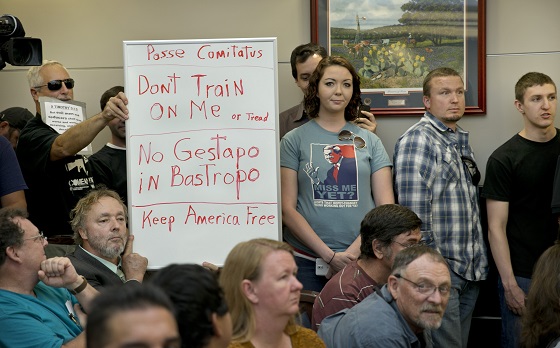 But only suckers and liberals believe anything they read in the lame-stream media. The real reason the stores were shut down is the secret tunnels.

The government, according to the chatterers on the Internet, has constructed a series of tunnels running beneath the closed stores as part of the plot to impose martial law. The tunnels, they maintain, will be used as FEMA-run internment camps.

This claim is just the latest twist on a set of long-running conspiracy theories promoted by the antigovernment “Patriot” movement. Going back to the 1990s and even before, far-right ideologues have postulated a government/globalist conspiracy to impose martial law and intern those who resist a massive gun seizure. Militia activists have produced fuzzy photos of abandoned rail cars supposedly meant for the roundup, theorized that some camps are hidden away under Oklahoma City, and even identified alleged FEMA concentration points.

Apparently, the Obama administration isn’t very good at imposing martial law. Last year, Internet patriots claimed, the socialist in the White House brought Ebola to our shores so he could do just that.

The new Republican governor of Texas, Greg Abbott, isn’t taking any chances. He has ordered the state guard to keep a sharp eye on the military when it comes to train. In the spring, amid what The Associated Press described as “Internet-fueled suspicions that the war simulation is really a hostile military takeover,” Abbott directed the state guard to be on the alert and to supply him, as he said in a letter to the guard commander, with “regular updates” on Jade Helm to “ensure that adequate measures are in place to protect Texans.”

Abbott added that during “the training operation, it is important that Texans know their safety, constitutional rights, private property rights and civil liberties will not be infringed.”

The governor sent the letter the day after some 200 concerned citizens packed a courtroom and an overflow room in Bastrop County to grill Army Lt. Col. Mark Lastoria about the exercise. One man held up a message printed on a white board that declared, “Don’t train on me or tread.”

Lastoria told the audience, according to the Austin American-Statesman, that the closed Walmart stores had nothing to do with Jade Helm and neither did FEMA or the UN, that two-letter four-letter word among the far-right crowd. Lastoria said the military wasn’t going to take anyone’s guns or property and that only 60 soldiers will be in Texas for the exercise at any one time.

And no foreign or enemy troops, including ISIS terrorists, will be involved.

Both Walmart and the Pentagon made similar denials of any conspiracy. But they would, wouldn’t they?

All told, Lastoria said, some 1,200 military personnel will take part in Jade Helm across several states from July 15 to Sept. 15. Most of the exercises in Texas will be conducted on private property in remote patches of the state and the military is only trying to prepare its men and women for dangerous missions overseas.

The colonel said the agreement between the military and Bastrop County to conduct the training was posted publicly some time ago.

“You don’t look that tan,” someone in the audience replied.

The biggest applause of the two-hour meeting, according to the Statesman, came when someone told Lastoria that he did not believe a single word the American colonel said.

With that, the spooked herd continued its stampede across the land.