Muslims have had a hard time in America since 9/11. But in the last few months, it seems clear that things are getting worse

Islam — and Muslims — are under attack.

Certainly, that has been true since the terror of 9/11, when almost 3,000 Americans were murdered by radical Islamists sent by Al Qaeda. Opportunistic politicians, along with a few genuinely trying to respond to the real threat Americans face, have railed against Islam repeatedly over the 14 years since then. More than half a dozen states have passed completely unnecessary and highly provocative laws banning the imposition of Shariah religious law on American courts. Controversies over the construction of mosques have hit communities around the country.

But the hatred directed at Muslims, which has fluctuated at various times over the last decade and a half, now seems undeniably to again be on the uptick.

Politicians and ideologues are claiming that the brutal Islamic State, or ISIS, already is sending terrorists across the border from camps in Mexico, seizing control of whole neighborhoods, and setting up sleeper cells. Teachers tell their young students not to trust Islam. People are gunned down in the street, apparently because they are believed to be Muslims. An arsonist sets fire to a Houston mosque.

Part of the reason is the work of extremist ideologues like Pam Geller, Brigitte Gabriel and many others. But it is largely a response to months of hair-raising news stories about the incredible savagery of groups like ISIS, repeated and exploited ruthlessly by activists bent on demonizing the Muslim faithful.

A Season of Hate
The latest season of hate seemed to take off in February, in the wake of the Charlie Hebdo attack in Paris and the beheadings of numerous ISIS hostages, when a man who officials say told a store clerk he hated Muslims allegedly burned a large building at a Houston mosque complex. From there, things got bloody.

In Setauket, N.Y., a man allegedly shouted “Osama” before driving his truck into a Sikh man, who he apparently mistook for a Muslim, and dragging him under the vehicle down a city street, injuring him badly. In Chapel Hill, N.C., another man allegedly gunned down three young Muslims at their condominium home. Although officials said a parking dispute may have had something to do with the triple murder, The New York Times pointed out that “whatever happened almost certainly was not a simple dispute over parking” and likely involved hate. In Dallas, a recent Muslim immigrant from Iraq was shot to death by two men while taking pictures of the snow with his family. Police investigated the attack as a possible hate crime.

Threats, too, seemed to proliferate. A man in Texas was charged with threatening to bomb the North Austin Muslim Community Center. A letter was sent to a mosque in Ames, Iowa, that included anti-Muslim slurs and threats. And Bernard Laufer, a 58-year-old man from Queens, N.Y., pleaded guilty to sending death threats to an employee of the Council on American-Islamic Relations.

Certain politicians poured fuel on the fire. U.S. Rep. Peter King (R-N.Y), chairman of the House Subcommittee on Counterterrorism and Intelligence, said that authorities should be allowed to send informants into mosques, coffee shops and other places where Muslims gather. Tom Tancredo, a former congressman from Colorado and longtime nativist, wrote that “we must stop all immigration of Muslims into the United States — yes, ALL Muslims — and then deport those already here who adhere to Shariah law” because we are “fighting a murderous religion.”

In Tennessee, state Rep. Susan Lynn (R) and state Sen. Bill Ketron (R) introduced a bill that sought to ban “contiguous geographical area[s] … where community organizing efforts systematically intimidate or exclude the general public or public workers from entering or being present within the area.” The legislators didn’t say so, but the bill unquestionable targeted “no-go zones” — areas that radical ideologues have claimed, baselessly, exclude non-Muslims.

That idea got a boost early this year from Steve Emerson, a Fox News pundit who claimed on air that Birmingham, England, was a “no-go zone,” prompting the British prime minister to call him a “complete idiot.” But it was parroted by other politicians, including Louisiana Gov. Bobby Jindal.

And even though Fox apologized repeatedly for this ridiculous claim, within a week of Emerson’s comments, Fox host Elisabeth Hasselbeck claimed that Paris had no-go zones. She then introduced another “expert,” Nolan Peterson, who said the city had 741 such zones. Snopes, a fact-checking site, rated that false. 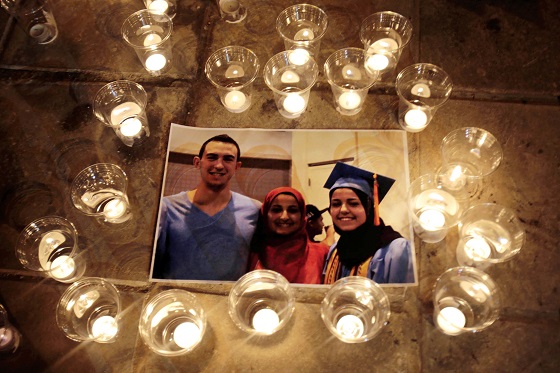 In Idaho, a local Republican official set off another storm. Becky Prestwich, the executive director of the Bonneville County Republican Central Committee, wrote an article in the group’s newsletter that said Muslims were infiltrating the state, had been taught to “rise up and kill” those of other faiths, and are schooled to be “two-faced,” pretending to be friendly while plotting violence. An article about the affair in the Idaho Statesman noted that a recent Gallup poll found, in fact, that Muslims and Mormons had “the most positive view” of religions not their own.

The National Rifle Association, the group that once described federal law enforcement officials as “jack-booted thugs,” got into the act as well. In Nashville, Tenn., author Steve Tarani told the group’s annual convention in April that Dearborn, Mich., indeed did have “no-go zones” where police were afraid to enter. He also cited “an estimate” of more than 5,000 terrorist cells in America.

Extremists and Public Opinion
And, of course, extremist ideologues chimed in. WorldNetDaily, which in the past has claimed that eating soy causes homosexuality, quoted “expert” Paul Sperry — its own former “Washington bureau chief” — saying that Muslims had been working for 30 years to infiltrate and “destroy our constitutional government.” He claimed that Alexandria, Va., was known as “Northern Virginia-stan,” mentioned “Dearbornistan, Mich.,” and said Minneapolis was a “terror hot spot.”

Judicial Watch, an outfit run by extremist lawyer Larry Klayman, cited Mexican “sources” to assert that ISIS had built a camp in that country just eight miles away from the Texas border city of El Paso. The group also claimed that ISIS was actively surveilling university, government and electrical facilities. The claim was roundly and immediately debunked by local and federal officials.

Meanwhile, Pam Geller, co-founder of Stop Islamization of America, won a case forcing public buses in New York City to run ads depicting a man with a scarf over his face saying, “Killing Jews is Worship that draws us close to Allah.” That is attributed to “Hamas TV,” and is followed by, “That’s his Jihad. What’s yours?” Later, Geller held a contest for cartoonists to parody the prophet Muhammad.

The flood of such rhetoric this year seems to have emboldened a number of everyday citizens to embark on their own Muslim-bashing. In Arkansas, for example, a woman who runs the Gun Cave Indoor Firing Range defended her ban on Muslims, saying she would ban Nazis and Klansmen, too. And in Broward County, Fla., a teacher allegedly publicly called a student a “rag-head Taliban.”

Indeed, such attitudes seem increasingly endemic. A February study by LifeWay Research found that 27% of Americans believe ISIS represents what the Islamic religion really is — along with 45% of 1,000 “senior Protestant pastors.” Another, similar survey, the Economist/YouGov poll, found that 52% of Americans think Islam is more likely than other religions to encourage violence.

But the latter poll also made one other interesting and important finding. Almost three-fourths of Americans — 73% — said they think American Muslims face a great deal or a fair amount of discrimination. After the last few months of hatred directed at Islam, that seems like a hard conclusion to dispute.