Byron Williams told investigators that he had wanted to “start a revolution” by “killing people of importance at the Tides Foundation and the ACLU.”

Already on parole for bank robbery and angry at his government, Byron Williams was heavily armed and wearing body armor when he was stopped one night in July by the California Highway Patrol in Oakland for driving erratically. A furious shootout followed. Flying glass injured two officers, and Williams survived multiple gunshot wounds.

Williams later told investigators that he had wanted to “start a revolution” by “killing people of importance at the Tides Foundation and the ACLU,” a police affidavit stated. “There is no doubt” that Williams was on his way to commit a serious crime against an individual or a group, based on his body armor and an “excessive amount of ammunition,” a highway patrol sergeant added.

Byron Williams, who allegedly shot it out with police on his way to attack a little-known liberal foundation, appears to have selected his target after hearing Glenn Beck's rants against it. 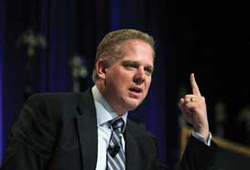 After Poplawski’s arrest, his closest friend described the accused killer as a Glenn Beck fan who was disturbed about possible gun confiscations, martial law and concentration camps purportedly being built by the Federal Emergency Management Agency (FEMA) — subjects he had heard Beck discuss on his program. (Beck repeatedly said he couldn’t disprove the detention camp conspiracy theory before finally announcing that he had “debunked” it.)

Poplawski even posted a link on Stormfront.org, a white supremacist website, to a video of Beck talking about FEMA camps with U.S. Rep. Ron Paul (R-Texas).

His friend also said that Poplawski was a fan of Alex Jones, a far-right conspiracy-monger who hosts a popular Texas-based radio show.

Beck denied he’s in any way responsible for the actions of Poplawski or Williams. But at the Tides Foundation, CEO Drummond Pike seemed to disagree. “It should be the obligation of every American, especially those whose voices are amplified by the media, to foster civil discourse and dialogue among those who may disagree about public matters,” Pike said.