Every November, just before Thanksgiving, friends, family and strangers gather across the country to read off the names of transgender men and women murdered over the course of the year. The mournful roll call is the Transgender Day of Remembrance. 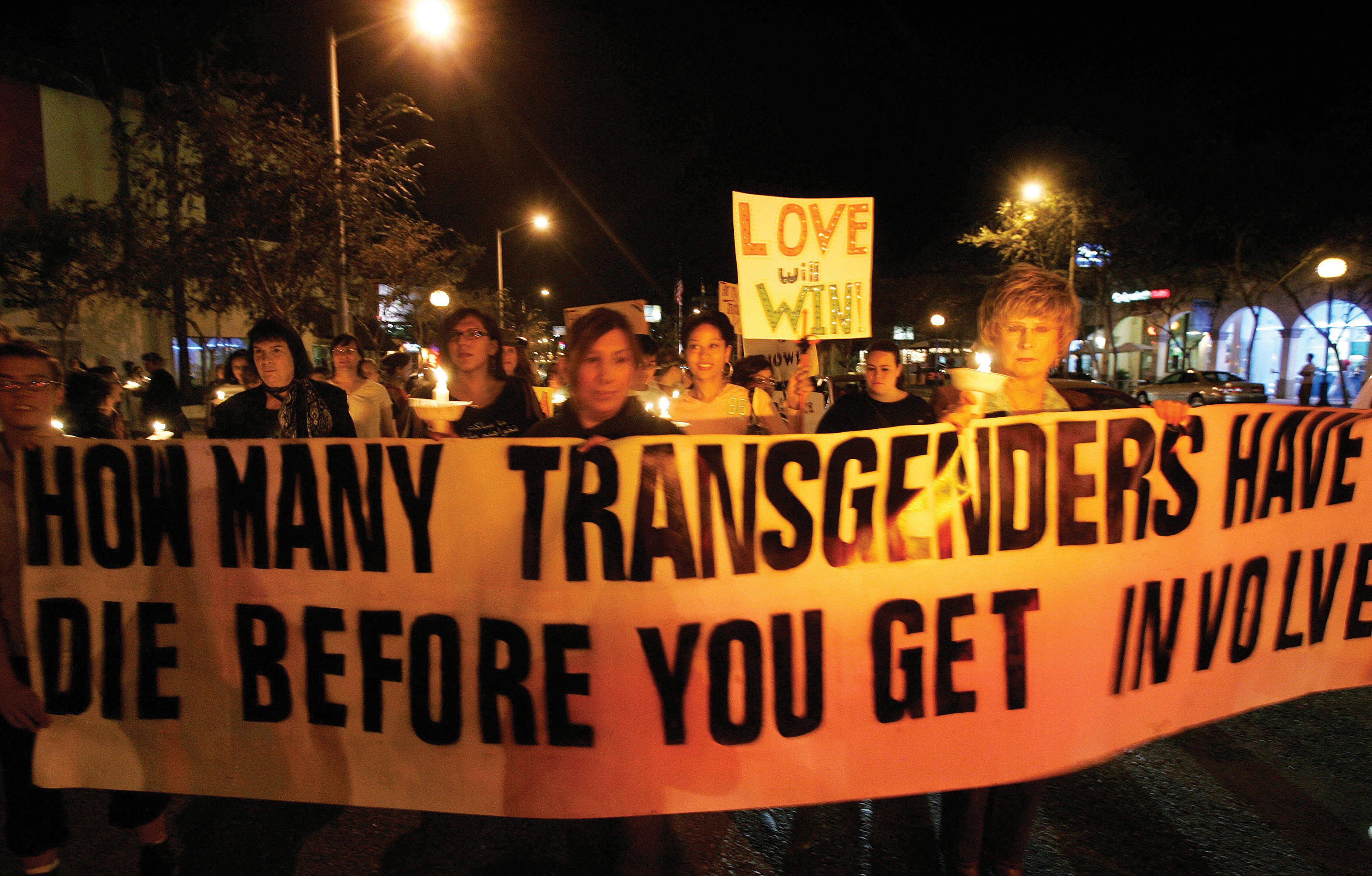 “State of emergency”: Every year, the Transgender Day of Remembrance, shown here being marked in West Hollywood, Calif., gains more urgency as the death toll mounts.

This year, more names than ever will be added to the list. Between January and mid-August, at least 17 transgender women, most of them women of color, have been murdered in the United States, surpassing last year’s death toll by four — with more than four months left in the year.

And the numbers could be even higher. As Advocate.com points out, the murder counts this year and last do not account “for individuals whose deaths were not reported or investigated, nor for victims who were misgendered or not regarded as trans women in death.”

The women were slain from Miami to Los Angeles. They were shot, stabbed and beaten to death. One woman was repeatedly run over by an SUV. The oldest victim was a 66-year-old in California. The youngest was 17 and lived and died in the Deep South.

The violence, Chase Strangio, a staff attorney with the ACLU’s LGBT & AIDS Project, told the radio program “Democracy Now!” three days after the murder of a transgender woman in Kansas City, Mo., is a national crisis and “a state of emergency for the transgender community” that is “disproportionately affecting transgender women of color, and particularly black trans women.”

The violence, Strangio added, “includes all of the ways in which transgender people, particularly transgender women of color, have their lives cut short through systems of discrimination and through interpersonal violence that leads them to be killed, as these women have been.”

When the names of those murdered in 2015 are read on Nov. 20, Tamara Dominguez of Kansas City will be number 17.

Dominguez, 36, was killed around 3 a.m. on Aug. 15. Witnesses told police, according to a local television station, that they saw her step out of a dark-colored SUV. Moments later the male driver struck her with the vehicle and ran over her body at least two more times.

Friends and family, according to Advocate.com, laid flowers at the crime scene, near the parking lot of a church.

Two days earlier in Johnston County, N.C., police discovered the body of 20-year-old Elisha Walker, buried behind a house. The authorities found her car burned and abandoned in the next county. Her family had reported her missing last fall.

Angel Arias, a 23-year-old member of the Latin Kings street gang, was charged with murder and felony vehicle theft in the case.

In June, another alleged Latin Kings gang member, Josh Brandon Vallum, 28, was charged in Mississippi with the springtime murder of Mercedes Williamson, a 17-year-old trans woman from the small town of Theodore, Ala. She was beaten to death and buried under debris on the Mississippi property owned by the suspect’s father.

The oldest on the list of the dead is K.C. Haggard, 66, of Fresno, Calif. Her throat was slashed by a passenger in a light-colored SUV as Haggard, a former security guard, walked home early in the morning of July 23.

The SUV sped away. Haggard was later pronounced dead at a local hospital. She was victim number 11.