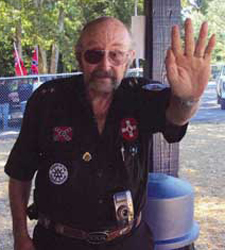 A couple of dozen members of theNational Knights of the Ku Klux Klan gathered to honor “50 years of service” to white supremacy by Railton Loy, the 72-year-old and slightly doddering grand wizard of the group. “KKKongrats,” members of the group wrote on their website. “God Bless Your Lordship and may you rule for many years to come.”

Loy, who uses the alias of Ray Larsen, says he joined a Klan group in Georgia in 1960, moved on to the United Klans of America in 1961, and then took 200 UKA members into the National Knights in 1973. On the death of leader James Venable in 1993, Loy ascended to national leader, a post he has held ever since. The recent festivities were marked with a sheet cake (“KKK: Happy 50th Anniversary Grand Wizard”), the presentation of a purple robe especially prepared for the occasion by an unnamed “Grand Dragoness,” and, naturally, a cross burning.

The National Knights is the nation’s third largest Klan group, with 22 chapters in 20 states, but it has become an object of ridicule among many white supremacists for legendary antics like failing to find members’ cars after a rally, resulting in them being pelted by counter-protesters. Still, Loy’s bedazzled followers praised him on the group’s website in effusive if doubtful terms, saying he had “raise[d] the status of the Klan beyond what many could ever dream of.”