With crimes from the 'sovereign citizens' movement on the rise, a new SPLC roll call video promotes law enforcement safety

Crimes committed by adherents of the so-called “sovereign citizens” movement — men and women who believe they are exempt from most laws, regulations and tax codes — continue to spread like a prairie fire.

In places as disparate as Georgia, Indiana, Nevada and Virginia, law enforcement officers are coming up against sovereigns allegedly scheming to steal houses, pry loose money from the government that isn’t theirs, and harass their enemies with crippling property liens and other forms of “paper terrorism.”

Threats against law enforcement and judicial officials are clearly multiplying, and since the murder of two West Memphis, Ark., police officers by a father-son team of sovereigns in May, they are being taken increasingly seriously. (The officers were only the latest of at least 32 law enforcement officials who have been murdered by right-wing extremists since the 1995 Oklahoma City bombing.) Around the country, officials are trying to understand a movement that is marked by virtually incomprehensible court filings and ideology in order to be able to police it.

With this in mind, the Southern Poverty Law Center — which published a major report on the sovereign movement in the last issue of the Intelligence Report — has produced a 12-minute instructional video intended for showing during roll call at law enforcement agencies.

Narrating the film are two men who fully understand the dangers some sovereigns present to authorities: West Memphis Police Chief Bob Paudert, whose son was one of two officers murdered during what at first appeared to be a routine traffic stop on May 20; and Jim Cavanaugh, who retired earlier this year after 33 years at the Bureau of Alcohol, Tobacco, Firearms and Explosives. Cavanaugh was a top official at the Branch Davidian standoff in Waco, Texas, during the five-year hunt for abortion clinic bomber and cop-killer Eric Rudolph, and in many other investigations involving right-wing radicals. Last year, he was honored for this work with the International Association of Chiefs of Police’s Civil Rights Award.

Here is a sampling of recent sovereign activity:

• In Indianapolis, Walter Eugene Lunsford was sentenced in September to two years of probation, to be served in home detention, after his conviction on eight counts of fraud and theft for using routing numbers from the Federal Reserve in a scheme to buy five cars valued at more than $150,000. He will be required to help state and federal authorities with related investigations. Lunsford was the Indiana coordinator for Guardians of the Free Republics, a sovereign citizens group that early this year fruitlessly demanded that all 50 governors resign. 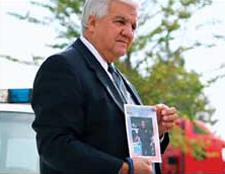 A lesson written in blood: West Memphis, Ark. Police Chief Bob Paudert says information about the "sovereign citizens" movement might have saved the life of his son.

• A Harwick, Mass., couple was sentenced to three years in prison in September for failing to file tax returns for 10 years. Frederick and Kimberlee Allen testified that taxes on individuals are unconstitutional and insisted, falsely, that only corporations or citizens living abroad are subject to federal taxation.

• A Las Vegas sovereign was sentenced to 18 months in prison in August for possession of an unregistered machine gun. Harold Call was one of four sovereign activists arrested following a three-year FBI investigation. The judge in Call’s case said some of the court documents he had filed were “stuff from outer space.”

• A Henderson, Nev., man countersued a Utah law firm for $38 quadrillion (that’s 38 followed by 15 zeros) after the firm sued him for placing an unjustified lien against the property of one of its clients. Like many sovereign citizens, the plaintiff spelled his name using a colon — John Theodore: Anderson.

• Also in August, Ronald Wade Smith Jr. was indicted in Virginia on charges that his Safeguard 30/30 Investment Club was really a Ponzi scheme that defrauded investors out of hundreds of thousands of dollars. A federal judge said Smith seemed to subscribe to the “redemption” theory — a scam that many sovereigns use to try to get the government to pay them huge sums of cash. Smith, who improbably claimed an annual income of $500 million, said in one court hearing that because he had not personally signed the Constitution, the document “does not apply to me.”

• Ivan Willis Taylor and Princess Donya Taylor of Stone Mountain, Ga., were arrested in August for allegedly trying to steal houses by using bogus sovereign documents. Princess Taylor filed a report with the sheriff’s office claiming she had paid off the mortgage on a foreclosed home with a “presidential promissory note.” Ivan Taylor told a sheriff’s deputy that he was “an ambassador from a sovereign state and was immune from arrest,” according to a sheriff’s office report.

The Taylors were but the latest in a spate of people arrested in the Atlanta metro area for allegedly filing phony documents to steal homes. (Police say one local sovereign stopped for speeding in Clayton County had $108,000 hidden in his truck, plus 12 bogus surety bonds totaling $302.7 billion.) Most of them have been black, and authorities say they were members of black nationalist “Moorish” groups. That is ironic, given that sovereign ideology originated in a racist group that said only whites could be sovereigns and blacks did, indeed, have to obey the law.