June 15 - Two men with no apparent connection to international terrorism pleaded not guilty to charges they planned to disguise themselves as Hasidic Jews in order to blow up a New York City synagogue. Ahmed Ferhani, who moved to the United States from Algeria, and Mohamed Mamdouh, a U.S. citizen from Morocco, were arrested after New York City police uncovered their alleged plot.

June 17 - Eric Fairburn, a racist skinhead musician who co-founded the white supremacist Vinlanders Social Club, pleaded guilty to murder in the shooting death of William McDaniel, 57, in Springfield, Mo. He was sentenced to life in prison. Prosecutors said Fairburn targeted McDaniel because he was allegedly responsible for the drunken driving death of one of Fairburn’s friends.

June 22 - William Bolton, a member of the Connecticut White Wolves, a white supremacist group that has since changed its name to Battalion 14, was sentenced to 30 months in prison for selling guns to an undercover FBI agent posing as a member of the Ku Klux Klan. Bolton, a 32-year-old Army and Navy veteran, previously pleaded guilty to plotting to rob an Ansonia, Conn., weapons collector and to selling a sawed-off rifle to a convicted felon. 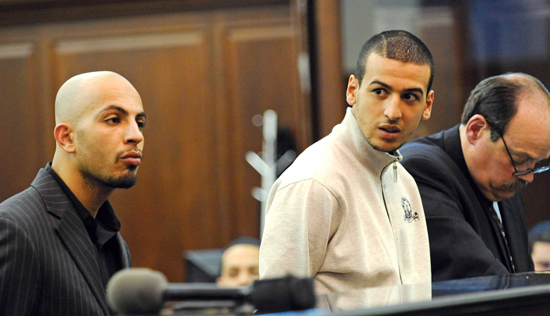 Ahmed Ferhani (left) and Mohamed Mamdouh are both U.S. citizens. But officials say that didn't stop them from planning a jihadist attack on a New York CIty synagogue.

June 23 - Walter Fitzpatrick, a retired naval commander who headed the antigovernment “Patriot” group American Grand Jury, was convicted of resisting arrest after attempting to detain a grand jury foreman in Madisonville, Tenn. Fitzpatrick allegedly tried to carry out the citizen’s arrest because the grand jury declined his demand to indict President Obama.

June 28 - Richard Poplawski, a longtime racist and avid reader of the online white supremacist forum Stormfront.com, was sentenced to death for the April 2009 shooting deaths of three Pittsburgh police officers. The officers were responding to a domestic disturbance call at the home Poplawski shared with his mother.

July 13 - Neal Ray Schmidt, a former grand dragon of the Missouri chapter of the Ku Klux Klan, was sentenced to 20 years in prison after admitting to driving 600 miles for sex with what he believed were two 14-year-old girls. The girls were, in fact, undercover police officers. When he was arrested in McDonough, Ga., Schmidt was carrying several guns, Klan paraphernalia and an assortment of sex toys.

July 28 - Allen Goff, a 19-year-old white supremacist, was sentenced to 40 days in jail after pleading guilty to threatening an American Indian teen at gunpoint in Billings, Mont. Goff leads the Montana Creators Assembly, an offshoot of the neo-Nazi Creativity Movement. In 2009, Goff was charged with the racially motivated shooting of a Latino teen, but he claimed it was an accident.

July 28 - Vincent McGee pleaded guilty to killing a white supremacist leader in Brandon, Miss., and returning a day later to set fire to the crime scene. He was sentenced to 65 years in prison for the death of Richard Barrett, 76, the founder of the Nationalist Movement near Jackson, Miss. Barrett operated a school for racist skinheads and traveled the country promoting race separation.

August 23 - August B. Kreis III, the self-appointed director of the neo-Nazi Aryan Nations, pleaded guilty to a federal charge of lying to the U.S. government to draw military veteran benefits in 2006 and 2008. Kreis is a longtime minister of the white supremacist Christian Identity theology and once was tapped by Aryan Nations founder Richard Butler to take over the organization. After Butler’s death, Kreis was one of several people claiming to lead the remnants of Butler’s group.

September 2 - Zachary Beck, a member of the neo-Nazi Aryan Nations, was sentenced to 51 months in prison for a January 2010 attack on a lone black patron of a sports bar in Vancouver, Wash. After following the man out of the bar, Beck and two others punched their victim, threw bottles and shouted racial epithets, including “White Power!” Beck has a long history of hate-related crimes. In 2005, he pleaded guilty to assault charges after shooting at Longview, Wash., police.