As the American “culture wars” increasingly focus on the rights and plight of transgender people, violence directed at the trans community — for years, one of the most victimized groups in the country — appears to be reaching new heights.

In the first six months of this year, 14 trans people have been murdered, according to the National Coalition of Anti-Violence Programs. That puts the year on track to exceed the 21 murders counted by the group in 2014. (The coalition has been criticized for including killings that have not been proven to be hate attacks. On the other hand, it’s likely that cases that were murders of trans people inspired by hatred were missed because of poor reporting by law enforcement officials.) Earlier, the coalition counted 14 murders of trans people in 2013, and 12 in 2014. 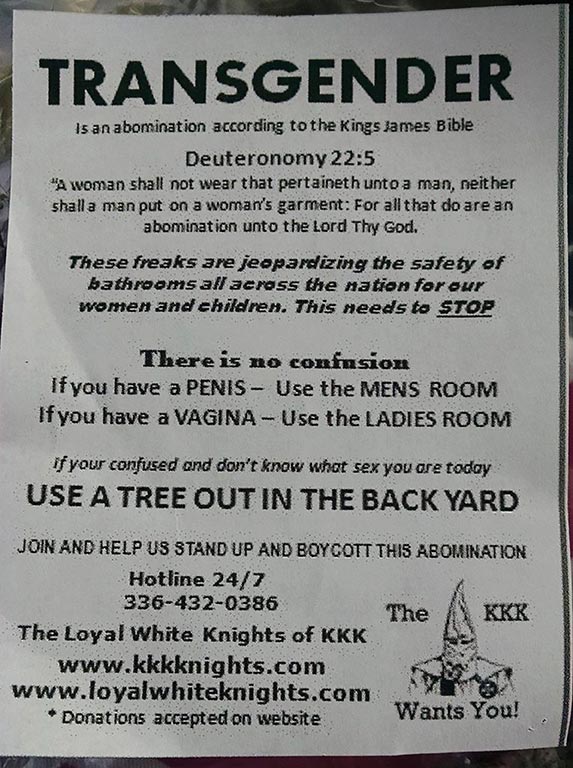 Ku Klux Klan attacks on transgender people are only a small part of a larger movement targeting America’s most vulnerable minority.

It was already known that trans people are victimized by hate crime more than others. Several years ago, the Intelligence Report, using 14 years of FBI hate crime statistics, found that LGBT people were far more likely to suffer violent hate attacks than any other group. Within that community, anecdotal evidence strongly suggests that trans people, and especially trans women of color, were the most victimized of all. Most of the trans murder victims of the last two years fit that description.

The latest round of attention paid to trans people — much of it negative and some of it violently antagonistic — has come as battles developed in state after state over the use of bathrooms. When President Obama issued a directive to public schools across the nation mandating that officials allow trans students to use the bathroom matching their gender identity, many conservatives erupted.

In March, North Carolina passed a “bathroom bill” that required people to use public bathrooms matching their birth sex. A few weeks later, Mississippi followed with a copycat bill. Similar bills have been filed in at least 10 other states, and on May 25, 11 states sued the Obama administration over its directive.

Opponents argue that men will claim to be transgender, enter women’s rest rooms, and sexually attack women and girls there. Virtually no such attack has been recorded, but that hasn’t stopped anti-LGBT groups like the Alliance Defending Freedom from issuing high-pitched warnings of a sex crime epidemic. The Klan, too, has joined in, distributing threatening anti-trans flyers around the country that suggested, without directly saying so, that trans people should be lynched.

The battle reached a fever pitch with the April announcement by Target that the department store would allow trans people to use the bathrooms of their choice. That sparked a call to boycott Target, signed by almost 1.5 million people, and a spate of ugly protests. A bomb exploded in one Target restroom, a protester at another so frightened shoppers that police were called, and Anita Staver, president of the anti-LGBT Liberty Counsel, said she’d carry a pistol in Target bathrooms.