Four days after the nation awoke to the carnage of one of the deadliest mass shootings in U.S. history — a massacre at a gay nightclub in Orlando, Fla., that left 49 victims dead — the Oath Keepers, an antigovernment group claiming many law enforcement officials as members, issued what sounded a lot like a call to war.

“[W]e are now honor bound to fulfill those promises and to honor our oaths by standing physically, shoulder-to-shoulder with our local peace officers and with fellow veterans and patriots, in direct defense of our communities against ISIS and their sympathizers and supporters,” Stewart Rhodes, the group’s president, wrote on June 16. “We must also fulfill our pledge to train our fellow Americans to FIGHT against this evil that aims to wipe liberty from the face of the earth.”

The pledge Rhodes was referring to was his group’s promise, first issued in 2013, to create “Community Preparedness Teams,” which were originally dubbed “Civilization Preservation Teams.” In the wake of the Orlando attack, which was carried out by an American citizen who claimed allegiance to the Islamic State, or ISIS, Rhodes sounded almost reasonable, describing the slaughter as a “senseless attack against our citizens, and the LGBT community specifically.”

But Rhodes and his band of present and former law enforcement and military members aren’t just sticking up for oppressed minorities and offering to help the authorities deal with endemic violence in America. They are true believers in a set of bizarre conspiracy theories that posit that the nation is facing massive subversion being carried out by self-interested global elites and President Obama — a fact that makes their ongoing paramilitary organizing efforts genuinely worrisome.

Indeed, Rhodes warned in the same post-Orlando piece that “this wave of Islamist terror attacks will be part of a ‘perfect storm’ of intentionally orchestrated … chaos-inducing economic devastation, social and political disruption and violence, and the use of intentionally undefended borders and mass illegal and ‘refugee’ immigration as weapons of destabilization (and to provide cover for and facilitate more violence and terrorism by multiple proxy agents of the elites, including the cartels, gangs, well funded Marxist and racist agitators — such as La Raza and Black Lives Matter — and radical Islamist cells and individuals.)”

To say it more plainly: Rhodes believes that Obama and “the elites” are intentionally refusing to defend the border and using criminal gangs and “Marxists” to subvert America from within. They are so evil that they are perfectly willing “orchestrate” terrorist attacks, he claims. The alleged plan, suggested in other Oath Keepers material, is seize Americans’ guns, jail any who resist, and impose a global “New World Order” that will pillage ordinary citizens to enrich global elites.

The allegations, of course, are ridiculous. There has never been a shred of evidence that Obama is plotting the destruction of America, whatever one may think of his politics. But they put Rhodes’ paramilitary efforts in a different light. 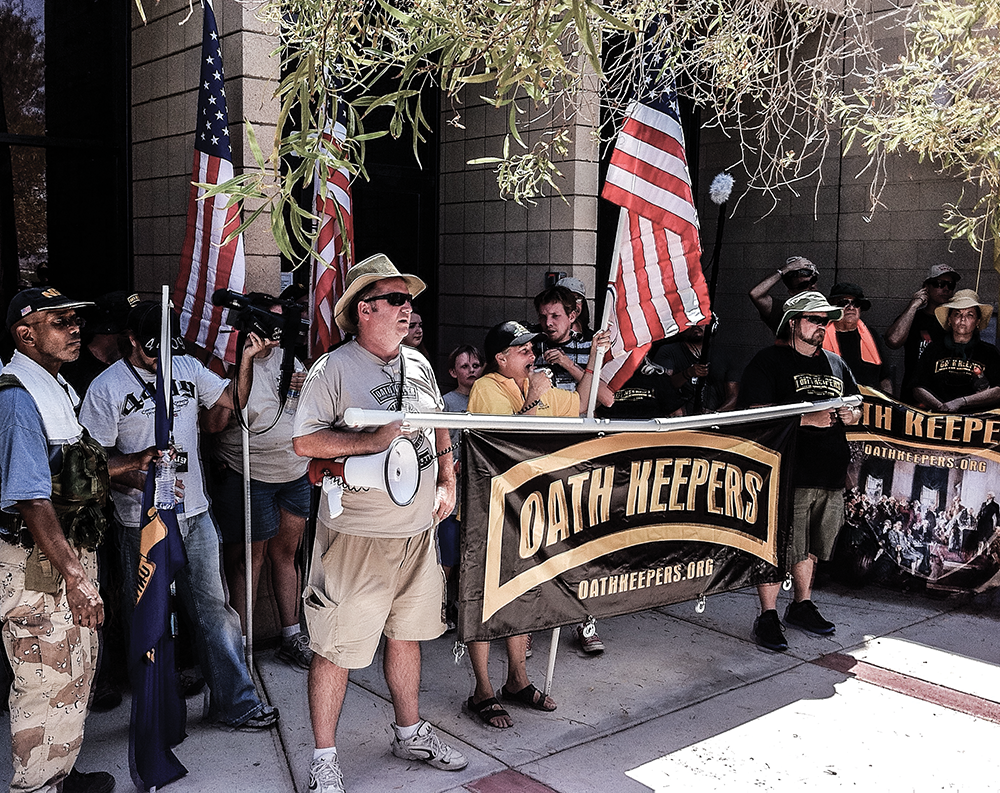 The Oath Keepers, who recently began training local militia-type units known as Community Preparedness Teams, have repeatedly interjected themselves into local conflicts like this one in Quartzsite, Ariz. (Ryan Lenz)

In fact, Rhodes’ Community Preparedness Teams (CPTs) are basically a new twist on the right-wing militias of the antigovernment “Patriot” movement. They amount to a well-armed vigilante movement animated by extremist fantasies.

“We want to see a restoration of the militia in this country,” is how Rhodes put it last year. “We think a good first step is to have the veterans stand up in every community and go help form and train neighborhood watches, to get the people to take back into their own hands their own personal self-defense and security.”

What Will They Defend?

If the past is prelude, the CPTs will be “defending” some unusual causes.

Formed in 2009, in the direct aftermath of the election of the nation’s first black president, the Oath Keepers first leaped into action in Quartzsite, Ariz., where they arrived to defend Jennifer Jade Jones, a local blogger who’d been arrested for disruptive behavior at a Town Hall meeting. Police said Jones had published a series of threatening communications, including a suggestion that residents at odds with town officials “run them out of town, or kill them.” Rhodes pronounced the dispute a “pivot point” in the alleged federal plan to impose a “New World Order.”

Rhodes, who was trained at Yale Law School, was later disbarred for acting as an attorney in Arizona during the dispute despite not being licensed in the state.

In April 2014, Rhodes and several Oath Keepers traveled to the Nevada ranch of Cliven Bundy, who engaged in an armed standoff with federal officials seeking to seize his cattle because Bundy had refused to pay federal grazing fees for some 20 years. (Twenty-seven people who participated in that standoff were charged this year with major crimes.) But the Oath Keepers fled after getting “intel” that Obama was about to launch deadly drones at the ranch, a fact that caused scores of Bundy’s other supporters to mock Rhodes’ crew as cowards and paranoid fantasists.

Needless to say, there was no drone attack.

Four months later, white, heavily armed Oath Keepers showed up in Ferguson, Mo., climbing on to rooftops as part of what they said was an effort to protect businesses in the area during angry protests against the police. Although they later claimed to have protected one black woman’s business, it seemed clear that they were really there to protect white businesses against black protesters.

Oath Keepers were involved in a number of other confrontations between the federal government and militants in disputes over public lands. And earlier this year, they were among those defending two sons of Cliven Bundy and other heavily armed militants who seized a wildlife refuge in Oregon for 41 days. Nineteen people were arrested in connection with that standoff and charged with federal crimes.

In a primer released in conjunction with its announcement of CPTs, the Oath Keepers described the situation bluntly. “We feel like we are flat running out of time and we need to get prepared as fast as possible,” it said. The group said that its board had already “war-gamed” how its “enemies” would “scrap the Constitution.”

It isn’t known how many CPTs the Oath Keepers have trained or created, and Rhodes would not respond to requests for comment from the Intelligence Report.

But the training is apparently intensive, and there is some evidence that it is really happening. “We have credible, well-trained veterans as the leadership and as the trainers,” Rhodes said in a podcast. “The real point … is not that Oath Keepers is going to be the security force or the community. … We are trainers.”

Brandon Smith, associate editor of the Oath Keepers blog, described in late 2014 one such CPT exercise held in Eureka, Mont. “Multiple steel and cardboard targets were camouflaged and placed along a wooded deer trail,” Smith recounted. “Members had to carefully traverse the area while seeking and destroying the targets, finding proper cover, etc. Missed targets resulted in a casualty.”

The trainees also went through exercises meant to teach them how to deal with casualties in battle. “As a prop, I fired a .308 round through a Christmas ham at about 50 yards,” Smith said. “One of our resident medical experts placed a plunger and tube into the ‘wound’ and pumped fake blood through it to add realism. We practiced applying hemostats to the fake artery, Celox for blood clotting, gauze insertion and packing, as well as how to use the famous ‘Israeli bandage.’”

The Oath Keepers CPT page on the Internet is divided into five sections: “Emergency Medical,” “Emergency Communications,” “Security/Team Tactics,” “Emergency Engineering” and “General Preparedness.” The page says “the ultimate goal is a true revitalization of the ‘well-regulated militia’ of the several states, made up of the people themselves, well organized, trained, and equipped, and with official sanction by the people’s elected representatives” at the local level.

Nothing untoward is yet known to have occurred with the CPTs that the Oath Keepers says it is training. But a quick glance at the group’s website gives a sense of the paranoia that is the core of its ideology. Rhodes rants regularly about “violent Communist thugs,” “oath breaking, partisan scumbag politician[s],” and “radical leftist extremists” like, presumably, President Obama. The CPT page regularly carries headlines such as “REVELATION: Dawn of Global Governments” and “Soros and CFR Exploit Refugee Crisis for New World Order.” That last , referring to liberal billionaire George Soros and the allegedly globalist Council on Foreign Relations, is reprinted from The New American, the magazine published by the John Birch Society, which once accused President Dwight D. Eisenhower of being a Communist agent.

If that is what Stewart Rhodes and the 30,000 people on his email list really believe, then the idea of them patrolling the land with guns is scary indeed. It’s one thing to advocate for preparedness, but another to apparently support sedition.