Touted by its co-founders as the new nucleus the organized hate movement would gather around, the Nationalist Front (NF) is floundering. Broke, bleeding member organizations and bereft of leaders with the vision to match their voices, the fledgling organization is hardly the blitzkrieg its founders imagined when NF was formed last fall.

Conceived by Jeff Schoep, 43, of the National Socialist Movement (NSM) and Matthew Heimbach, 26, of the Traditional Worker’s Party (TWP) as the thread that would unite white supremacist and white nationalist circles, the NF has already fallen on hard times after just six months.

Even in January of this year Heimbach remained convinced the threads were tying together, as evidenced in Vegas Tenold’s piece for The New Republic, “When the White Nationalists Came to Washington.”

Tenold captures a bullish Heimbach on inauguration day, brimming with glowing portends about himself as a doyen of the racist right: 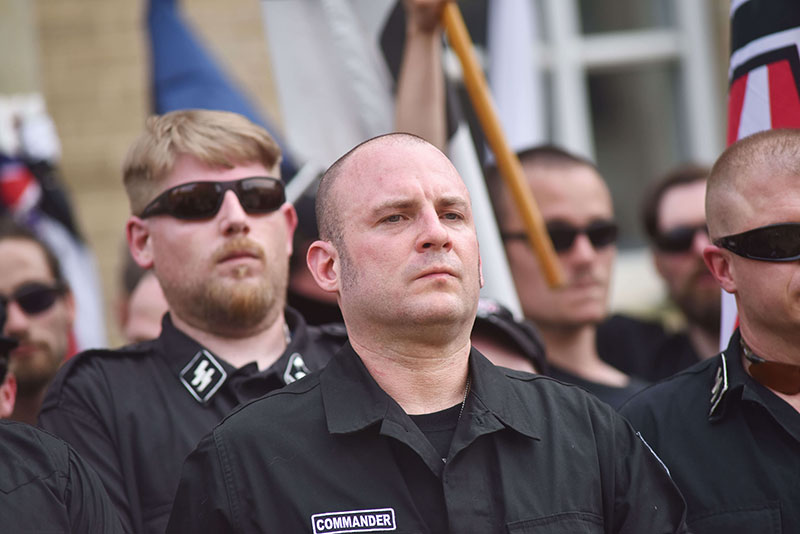 “Remember how only a year ago we were sitting in a pizza restaurant in Kentucky, hardly 10 members in our party? Today, a year later I’m giving a speech in the most important Republican club to a group of Republican operatives. Things are happening. I can feel it.”

Heimbach’s statement fell flat, and what happened afterward gave him little to be confident about. That period evidenced a series of collapses across a number of unity efforts attempted by dozens of white racist groups.

Efforts like the Coalition of Aryan Organizations and the United Aryan Front appeared early but disappeared by April 2016. The latter collapsed when one of its leaders — Rebecca Barnette of Tennessee — defected for the Aryan National Alliance (ANA), a short-lived confederacy marked by betrayals from its birth.

When ANA announced itself in the spring of 2016, Schoep was piloting the coalition along with the help of New Jersey’s Josh Steever, who leads the racist skinhead crew Aryan Strikeforce (ASF), and Steve “Bowers” Nastasi, of Pennsylvania. 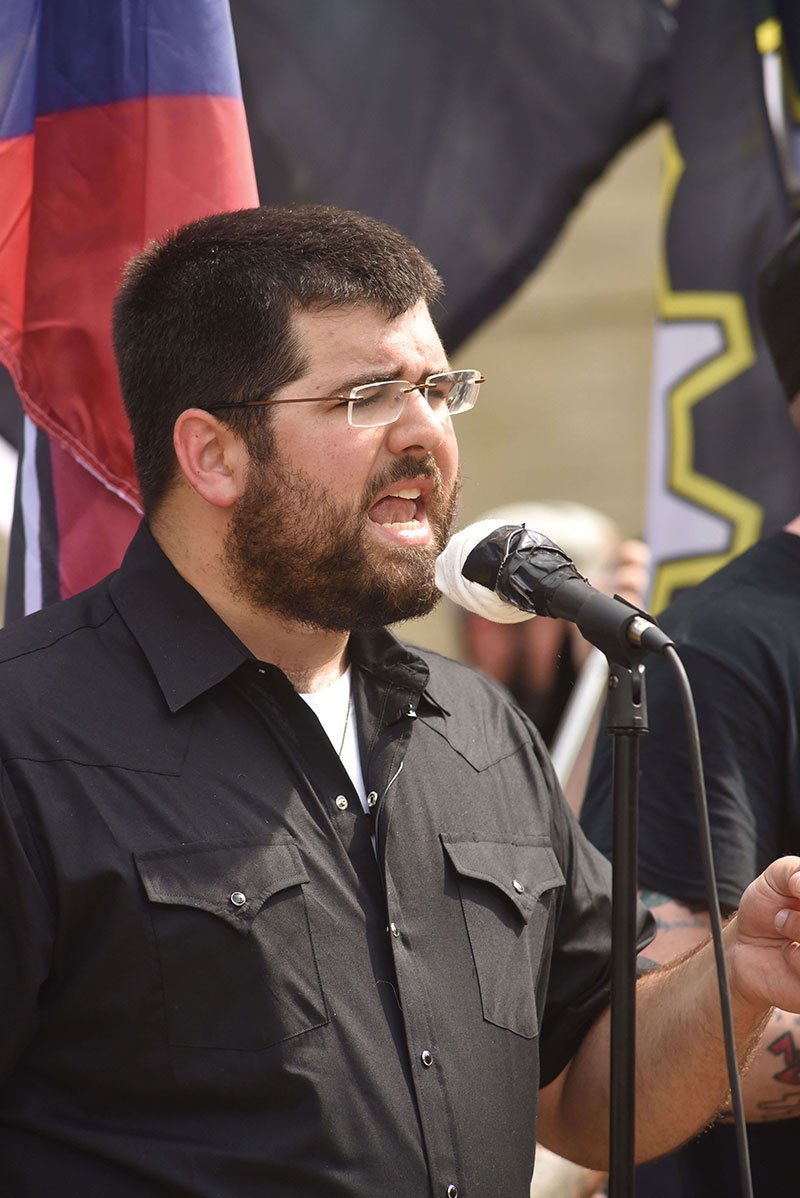 On the last weekend in July, 2016, the coalition held its first meeting on private land in Salem, Ohio. There, Barnette was tapped to lead NSM’s and ASF’s women’s divisions. The coalition boasted close to 30 groups.

Intrigued by a chance to bloc recruit or fearful of being left out, Heimbach traveled to Salem where he announced TWPs membership in ANA, calling again for the creation of a whites-only ethno-state.

A march-turned-riot on the state capitol grounds in Sacramento, California, occurred that same weekend. The Golden State Skins (GSS), a California-based racist skinhead crew, carried the banner of the Traditionalist Worker’s Party that day. But after months of baiting and provoking far-left opposition on TWP’s behalf, Heimbach was a ghost at his own event.

Dozens of Heimbach’s troops were injured and several people were stabbed. The violent chaos of that day resulted in the California Highway Patrol recommending 514 misdemeanor and 68 felony charges involving 106 individuals. 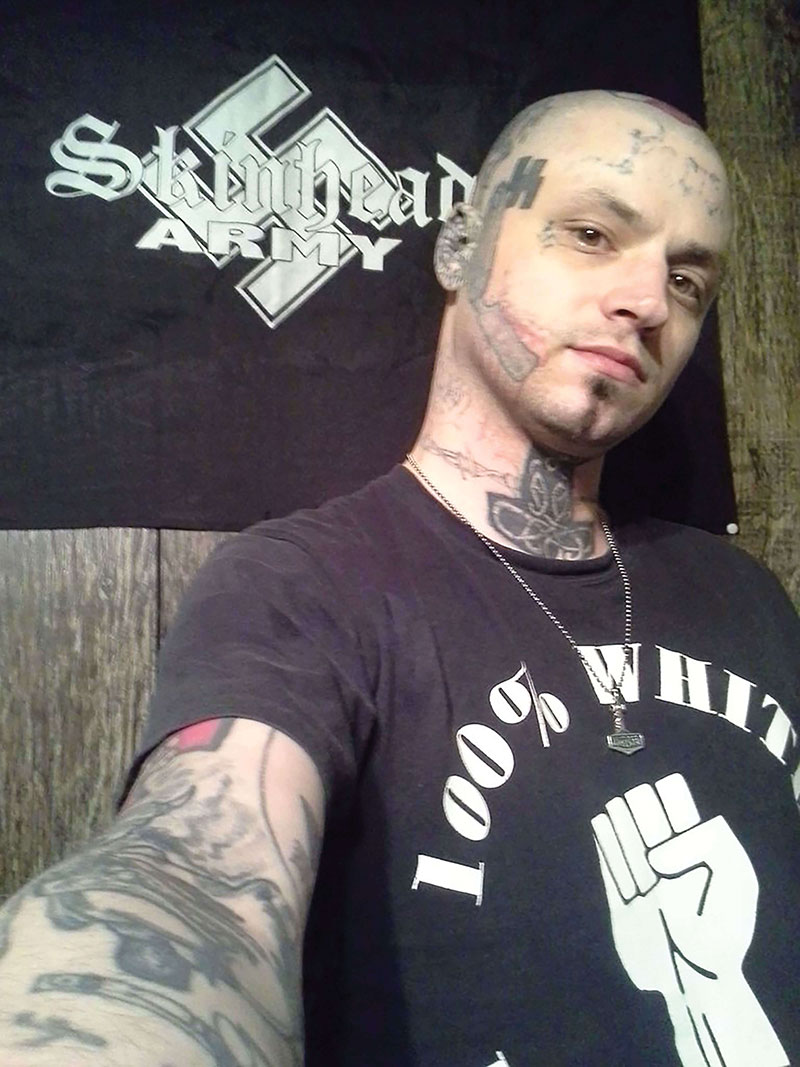 Heimbach, safe and sound some 2,500 miles away in Ohio, stood unscathed by — and unindicted for — a fight he helped pick. He had chosen instead to align with Schoep, long a pariah within organized hate, rather than to stand with racist skinheads who fought for his party. GSS has not been seen flying the TWP banner since.

The Salem meeting proved to be flypaper for Heimbach, damaging his reputation in some circles. He had a chosen a side, one on which a rift was about to emerge.

The NF was announced in early November. On its website, Schoep and the NSM wiped the ANA name from the original April 26 news release, plugging in the NF’s in its place.

Overnight, a new coalition emerged, but the turbulence caused by poor leadership endured.

By the New Year, Barnette had been drummed out of the movement. Schoep and Steever parted ways, and the NF could only boast about half the groups that the ANA could six months previously.

Flash-forward to April 2017: The NF was comprised of nine groups and things were going from bad to worse.

Steever was arrested on April 13 and is currently under indictment for illegal possession and transfer of firearms, interstate racketeering, and conspiracy to distribute methamphetamine and conduct money-laundering transactions — all for the alleged purpose of funding and supplying his group and its comrades. Meanwhile, Schoep was busy begging for money, as the leaders of TWP, NSM and the League of the South were struggling to cover the costs an April 28 Pikeville, Kentucky, rally.

The NF conceived its Pikeville rally with cynical intentions. They hoped the hardships of a state that in 2015 sat at 49th in median household income would provide them footholds within the community into which they could stamp race-hate.

The event flopped, drawing just over 100 bigots to Pikeville who gathered in a pen constructed by authorities around the rally site. Ten different extremist groups were reportedly represented, some NF and some not. Clad in their varying uniforms, most were attracted by news cameras and the chance to face down rival leftists, the conflict du jour across the racist right after riots in Sacramento and Berkeley, California.

Over 200 mostly non-local counter protestors amassed to confront the racists, and in a county that is 98% white the NF failed to attract any measurable support from residents — the rally’s stated purpose.