Though presidential candidate Donald Trump made a few statements on the campaign trail indicating he might be in support of LGBT equality, other statements and actions have belied that. His pick for vice president is a longtime opponent of LGBT equality who has opposed putting same-sex relationships on equal legal footing as heterosexual marriages.

Trump also made statements that he would consider appointing Supreme Court justices who could help dismantle marriage equality. 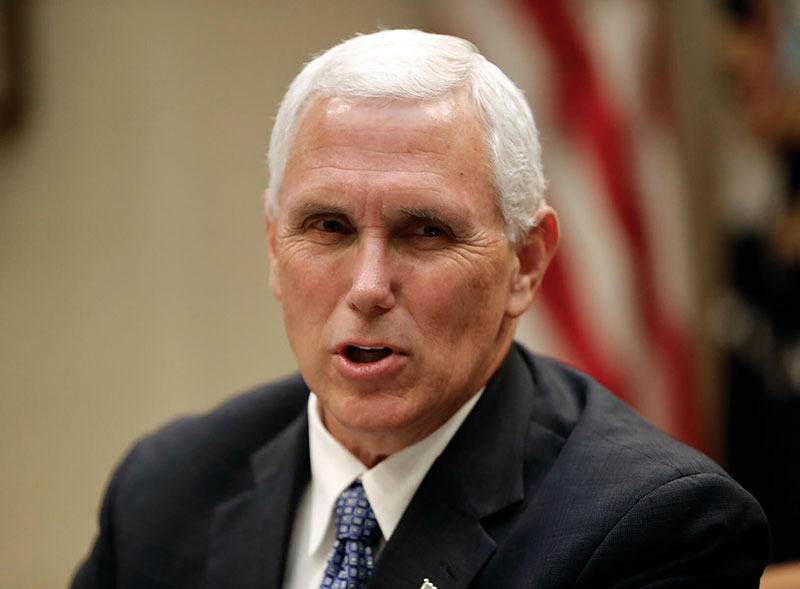 Upon Trump’s election, LGBT activists expressed deep concerns. “This is a devastating loss for our community,” Jay Brown of the LGBT rights organization the Human Rights Campaign stated in The New York Times the day after the election. Also in the Times, Mara Kiesling, executive director of the National Center for Transgender Equality, concurred. “All across America right now there are millions of people who are terrified.”

Trump’s presidency has proven many LGBT rights groups correct in their concerns about rollbacks in terms of LGBT equality. The Trump Administration has created new opportunities for anti-LGBT groups, many of whom view him and Vice President Mike Pence as vehicles for either dismantling equality for LGBT people or enabling anti-LGBT policies. 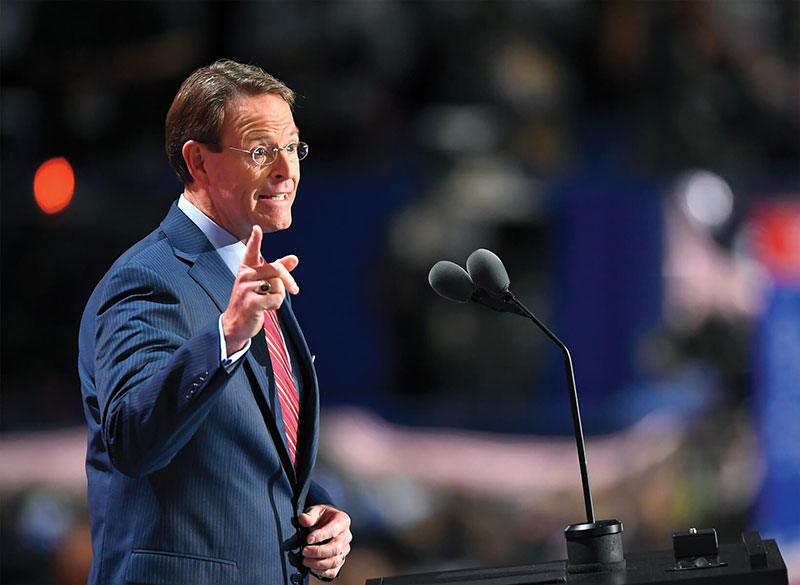 Tony Perkins of the anti-LGBT hate group Family Research Council proclaimed his support for Trump in 2016, explaining that, from a pragmatic standpoint, there might be “opportunities” with Trump to end what he perceives as anti-Christian persecution.

Many on the anti-LGBT right expressed support (some of it lukewarm) during then-candidate Trump’s campaign, and have found a receptive audience for their views in the current administration. In 2016, Tony Perkins of the anti-LGBT hate group Family Research Council (FRC) told Sandy Rios of fellow anti-LGBT hate group the American Family Association (AFA) on his Washington Watch radio program that he was voting for Trump, and though he didn’t relish it, he claimed from a pragmatic standpoint there might be opportunities. 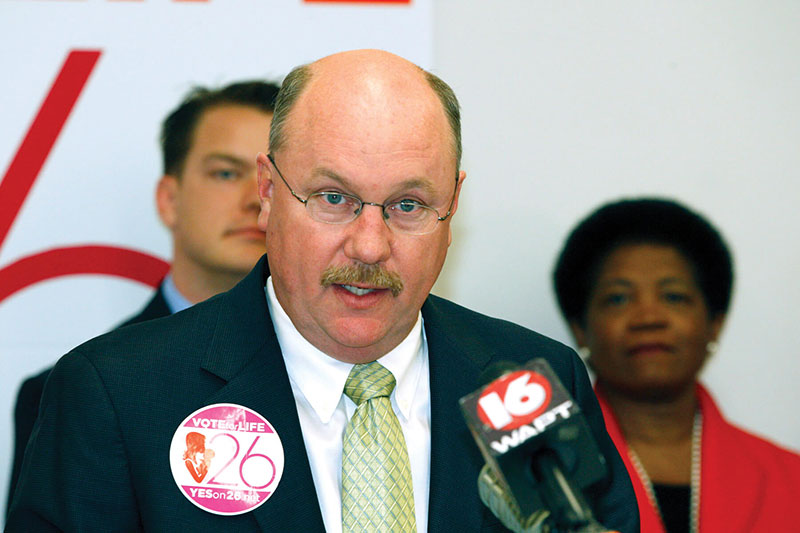 For Tim Wildmon, president of the hate group American Family Association, a Clinton White House would have “criminalized Christianity.”

Tim Wildmon, president of AFA, said that after the election, America “avoided catastrophe” by electing Trump because Hillary Clinton would have “criminalized” Christianity.

The selection of Pence as vice presidential running mate was also a major boost for anti-LGBT groups. When Pence was running for Congress, he supported banning LGBT people from serving in the military and opposed efforts to put same-sex relationships on an equal par with heterosexual marriage and also opposed efforts to recognize LGBT discrimination.

Pence gained recent notoriety in 2015 when, as Indiana governor, he signed a hastily passed, so-called “religious freedom” law in the state that opened the door for making discrimination against LGBT people legal. In the backlash that ensued — including companies pulling businesses from the state — Pence signed a revised version of the bill that barred businesses from explicitly discriminating against LGBT people.

With the election of Trump, however, Perkins’ statement about opportunity within the administration was all too true. Within hours of the election, references to LGBT people and policy were removed from the White House website and a search on the site for “LGBT” turns up little. The Obama-era White House website, which included references to LGBT rights and policies, was transferred to an online archive.

The Trump Administration also removed questions about LGBT people from an annual survey administered by the Department of Health and Human Services (HHS) to help determine available services for elderly Americans. The questions had finally been added in 2014. In June 2017, HHS decided to retain the questions on sexual orientation but not on gender identity. The Housing and Urban Development department also withdrew a survey that would have measured the effectiveness of a homelessness project for LGBT youth. Both incidents have alarmed watchdog groups, who are concerned about a concerted effort to erase LGBT people from policy discussions and manipulate government data to serve a particular ideology.

Michael Adams, CEO of Services and Advocacy for Gay, Lesbian, Bisexual and Transgender Elders (SAGE), told U.S. News and World Report that halting this data collection has the potential to affect federal funding and programming, but also funding at local and state levels. “It’s a big deal to make this change,” he said. “What this is about is stripping out an entire population.”

In a move in February hailed by anti-LGBT groups nationwide, the Trump Departments of Justice and Education rescinded Obama-era instructions to schools to respect the rights of trans students and allow access to bathrooms and other facilities that align with their gender identities. And in late March, President Trump also reneged on a January statement in which he indicated he would be keeping an Obama-era order protecting LGBT people employed with federal contractors from discrimination on the job and requiring contractors to provide documentation indicating their compliance with federal anti-discrimination policies. Trump revoked the latter aspect of Obama’s order, which thus releases federal contractors from scrutiny with regard to discrimination. 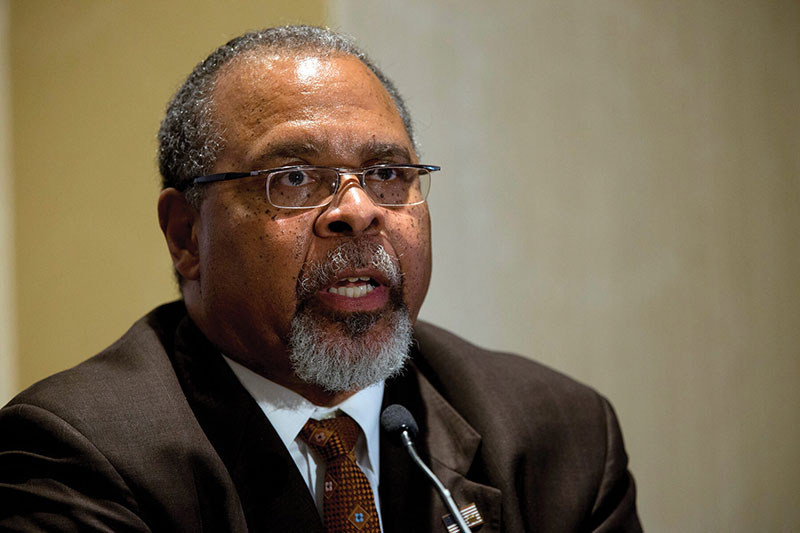 Meanwhile, the administration has also appointed anti-LGBT individuals to various positions. Ken Blackwell, a senior fellow at the anti-LGBT hate group Family Research Council, was named to the Trump transition team to handle domestic issues. Blackwell, former Ohio secretary of state, gained notoriety when he allegedly implemented a series of voter suppression measures in that state in 2004 that may have swung it for George W. Bush. Blackwell, who also sits on the board of the NRA, has claimed that homosexuality is a “compulsion” and a “lifestyle choice” that can be changed.

More recently, Blackwell was named to the Presidential Commission on Election Integrity, along with longtime anti-immigrant activist and attorney, Kansas Secretary of State Kris Kobach.

Other transition team members with ties to the FRC include former senior vice president Kay Coles James and former director of FRC’s center for religious liberty, Ken Kuklowski. James, who served as assistant secretary for Health and Human Services during the George W. Bush administration, also has ties to the Heritage Foundation and Focus on the Family. Kuklowski is also an editor at Breitbart.com, which has been touted as a platform for the white nationalist so-called “alt-right” movement. 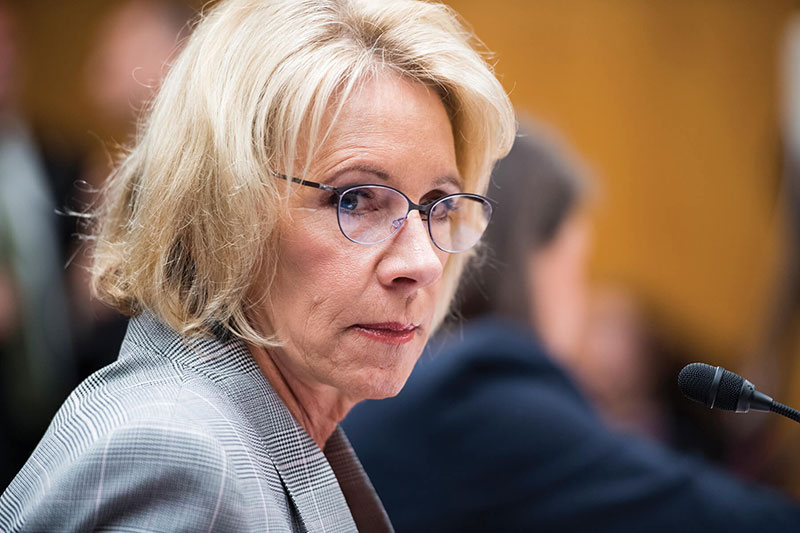 Education Secretary Betsy DeVos and her family have given millions to Focus on the Family. Photo by Bill Clark.

The Trump cabinet now includes anti-LGBT figures like Betsy DeVos as secretary of education and former Georgia representative Tom Price as secretary of health and human services. DeVos is part of the Price/DeVos mega-funding nexus of right-wing donors, providing millions of dollars to organizations like FRC and the National Organization for Marriage.

Price has a long history of anti-LGBT sentiment as a congressman; he voted in 2006 to ban marriage equality nationwide and in 2013 referred to “homosexual activity” as “seen outside the norm.” He also opposed repealing the military’s “Don’t Ask, Don’t Tell” policy, which prevented the military from discriminating against closeted LGBT people who were simultaneously forbidden to serve openly. Price has also voted against hate crimes legislation and against employment rights for LGBT people.

Other Trump picks include former Alabama Senator Jeff Sessions, who voted against the 2009 hate crimes law that included LGBT people. Housing and Urban Development Secretary Ben Carson has argued that going to prison can cause people to become gay. He has suggested that Congress can fire any federal judge that disagrees with a law and that Congress could pass a law to circumvent the 2015 Supreme Court ruling that legalized same-sex marriage in the U.S.

Anti-LGBT hate group the Center for Family and Human Rights (C-Fam) also received a boost in March when Lisa Correnti, its executive vice president, was named by the U.S. State Department to the U.S. delegation to the UN for the Commission on the Status of Women annual meetings. The other nominee was Grace Melton of the Heritage Foundation.

Both groups have long histories of opposing LGBT equality, but also opposing reproductive rights for women. Austin Ruse, president of C-Fam, has supported the criminalization of speech about homosexuality and LGBT people, voicing such support when Russia passed its draconian anti-speech laws that criminalize “homosexual propaganda.” He has also linked homosexuality to pederasty, claimed that LGBT people are a danger to children and, in 2014, while guest-hosting on AFA radio, called for left-wing professors to be “taken out and shot” (AFA posted a statement in the wake of the outcry over Ruse’s comments that he would not be appearing on AFA radio in the future).

The Trump Administration’s naming of individuals from these two groups to a gathering to discuss international policy regarding women sent another signal to anti-LGBT groups that they had an ally in the White House.

The anti-LGBT right also universally hailed Trump’s selection for Supreme Court justice, Neil Gorsuch, as a way to potentially roll back marriage equality and reproductive rights in the United States. Gorsuch’s history suggests that may be the case; he contended in his 2004 dissertation in philosophy at Oxford University that the U.S. Constitution does not guarantee a right to same-sex marriage. In 2005, he went after liberals in a National Review op-ed after marriage equality passed in Massachusetts, claiming that they “have become addicted to the courtroom, relying on judges and lawyers rather than elected leaders and the ballot box, as the primary means of effecting their social agenda,” including gay marriage. They can only win a victory on issues like gay marriage, he claimed, “when preaching to a choir before like-minded judges in Massachusetts.”

As a justice on the 10th Circuit Court of Appeals, he has ruled against trans people in discrimination lawsuits and — in the pivotal Hobby Lobby case in 2013 — he joined in the opinion of the full court of appeals holding that federal law prohibited the Department of Health and Human Services from requiring some secular organizations to provide contraceptive coverage as part of their employee health plans on the basis of religious objection. The ruling was hailed as a victory for so-called “religious liberty” by the Christian right.

Anti-LGBT groups have also been awaiting the passage of a wide-ranging federal “religious liberty” executive order. They got it, when President Trump signed it in early May. The order allows broad exemptions for organizations with regard to political speech — another issue the Christian Right has been working on for years ­— in hopes of undoing the Johnson Amendment, which is a provision in the U.S. tax code that prevents certain tax-exempt organizations from endorsing or opposing political candidates.

“We are giving our churches their voices back,” Trump proclaimed upon signing the order, though the Johnson Amendment is rarely enforced. The order also provides “regulatory relief” to organizations that oppose an Obamacare mandate to provide contraception through healthcare plans.

An earlier version of the order would have allowed federal contractors to discriminate against LGBT people based on religious belief, but the version that was actually signed did not include that provision, which disappointed some anti-LGBT groups, who claimed the order “did not go far enough.” Nevertheless, the order directs the Department of Justice to issue guidance protecting “religious liberty,” which could have anti-LGBT repercussions, given the current make-up of the DOJ.

If the first few months are any indication, this administration will continue to demonstrate a reinvigorated assault on not only LGBT rights, but reproductive rights and the rights of other marginalized communities, much to the delight of anti-LGBT and anti-choice groups, as well as groups that have long opposed civil rights in general.