Much has been made of the rise in racist and xenophobic rhetoric, anti-Muslim attacks, and anti-Semitic trolling in the wake of Donald Trump’s ascent, and rightly so. But just as Trump’s promises to build a wall on the U.S.-Mexico border, block Muslim immigration, and restore “law and order” have emboldened nativists and racists, so has his history of casual misogyny and alleged sexual assault (“grab them by the pussy”) energized an explicitly sexist element within the noxious “Alt-Right” movement.

Though he is best known for his white nationalism, Alt-Right personality Richard Spencer has made it clear that women, too, would be marginalized in his fantasy world. During the first presidential debate of 2016, he tweeted that “[w]omen should never be allowed to make foreign policy. It’s not that they’re ‘weak.’ To the contrary, their vindictiveness knows no bounds.” Female citizens of his ideal white “ethno-state,” he told The Washington Post, would stay at home and produce offspring.

And, according to Mother Jones, Spencer dismisses the idea that Trump’s alleged history of forcing himself on women, kissing and groping them without their consent, constitutes sexual assault. Indeed, he seems to endorse rape, writing, “At some part of every woman’s soul, they want to be taken by a strong man.” 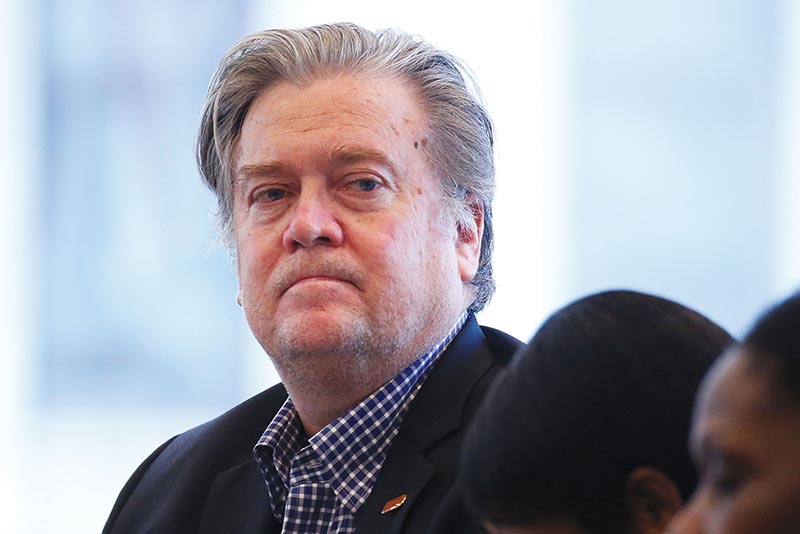 Stephen Bannon, now a top advisor to Donald Trump, is one of those who led the resurgence in ver-bal attacks on women and feminists that has afflicted the nation in recent years.

Then there’s Stephen K. Bannon, chief White House strategist, who presided over far-right Breitbart News — which he called a “platform for the alt-right” — when it featured headlines like, “Birth Control Makes Women Unattractive and Crazy” and “Would You Rather Your Child Have Feminism or Cancer?” It also carried endless anti-feminist pieces by Alt-Right arch-troll Milo Yiannopoulos, who wrote in August, “In terms of female happiness, women’s liberation was probably a mistake.”

Misogyny, in other words, is making a comeback.

Celebrating Trump’s victory, self-declared “neo-masculinist” Daryush Valizadeh (alias “Roosh V”) wrote: “I’m in a state of exuberance that we now have a President who rates women on a 1-10 scale the same way we do. … The president of the United States does not see the value in fat women who don’t take care of themselves, and neither should you.”

Matt Forney, a racist blogger who claims women secretly want to be “raped” and “beat[en],” endorsed Trump because, as he wrote on Oct. 26, “Trump is showing the world that not only is the emperor naked, his d--- is the size of a clit.” He was apparently referring to mainstream conservatives who he sees “cuckolds” who have sold white people out.

With misogynist Alt-Right personalities on the rise, day-to-day acts of anti-woman violence took on new significance. At the University of Arizona on Sept. 20, Dean Saxon, a street preacher best known for “s----shaming” women and hollering “You deserve rape,” was arrested and banned from campus for a year for allegedly kicking a woman in the chest.

On Oct. 13, Fox Business host Lou Dobbs “doxxed” Jessica Leeds, retweeting a post that included the address and phone numbers of the 74-year-old, who alleges that Trump sexually assaulted her on a plane in the early 1980s.

And on Dec. 9, a California judge sentenced to eight years in prison — the maximum — Alex Smith, a professional “pickup artist” who, together with a fellow pickup “instructor” and a “student,” gang-raped a woman who found out how she was attacked from Smith’s online profile.