Images of the World Trade Center in flames exposed a schism between a notable hate group’s activists and its aspirations, leading to a prominent member’s resignation.

The conflict started when a high-profile member, Brenda Arthur, constructed a display in the West Virginia Capitol during a “Republicans Take the Rotunda” event.

Arthur was a chapter leader for the anti-Muslim hate group ACT for America. Her booth featured a poster of U.S. Rep. Ilhan Omar, D-Minn., and the Sept. 11 terrorist attacks.

The poster read: “Never forget — You said.” It was juxtaposed with an image of Omar and the caption: “I am the proof you have forgotten.” 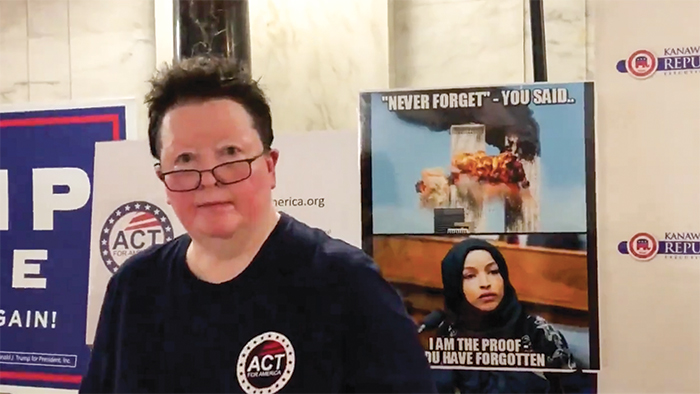 Brenda Arthur stands in front of her controversial poster display at the "Republicans Take the Rotunda" event in West Virginia. (Twitter)

Arthur’s table featured ACT branding, and she wore an ACT T-shirt. But when the display caused a national uproar in March, ACT sprang into public relations mode. “This was NOT an ACT for America display,” the national office said in a statement, adding that anyone claiming to be part of the group was “doing so without the permission” of ACT national.

However, the display aligned with statements made by ACT leadership. Brigitte Gabriel, ACT’s founder and chairman, has claimed “terrorist attacks” are the “purest form” of Islam. The Southern Poverty Law Center designates ACT as a hate group because it pushes conspiracy theories about Islam in America and operates a nationwide chapter network to lobby and pass anti-Muslim legislation across the country.

ACT’s handling of the West Virginia incident illuminated its internal conflict between the veneer of respectability it must maintain to gain mainstream political acceptance and the bigotry that attracts members. Until the West Virginia event, ACT lauded Arthur as part of its organization. In 2018, Gabriel called her “one of our most influential activists.” Arthur claimed to represent ACT in 2017 when she testified before her state’s House of Delegates committee in opposition to refugees. ACT subsequently highlighted her testimony on its webpage.

For more than a decade, ACT has been pushing an anti-Muslim agenda. Since Donald Trump’s election, the group claims to have a “direct line” to the president through U.S. Secretary of State Mike Pompeo, whom ACT calls a “steadfast ally.” Pompeo’s office did not return repeated calls for comment. In September 2018, Gabriel bragged about having a weekly “standing meeting” at the White House, though details about these meetings are uncertain. In 2017, Gabriel met with White House staffer Paul Teller to hand-deliver a petition supporting Trump’s Muslim travel ban. ACT’s newfound influence has come with an increased level of scrutiny from the media and civil rights organizations.

It appears the group is trying to downplay its extremism to protect its public image. ACT did not return a phone call seeking comment.

The organization’s disavowal spurred Arthur to resign as chapter leader in April. She wrote in a Facebook post that ACT does “not want me involved in this as they feel I have become the lightening [sic] rod” after the poster incident. Arthur did not return requests for comment.

Arthur’s resignation from ACT brings the number of state defections to four within the last three years. In 2017 and 2018, chapter members in Idaho, Montana and Maine left the national organization, citing disapproval of the national leadership. ACT claims to have 1,000 chapters. However, that number is likely exaggerated as the Intelligence Project independently identified only 47 active chapters in 2018.

One former member, Warren Grover, who led Idaho’s Treasure Valley chapter, wrote in his final email as chapter leader in 2018 that ACT is losing sight of its mission “to increase the awareness of Islam and its threat to our country.” The leadership for the Lake County, Montana, ACT chapter, which disbanded in 2017, wrote in a newsletter that while it “continued to support the mission of” ACT, it disagreed with some of the “methods and directions coming from” the national office. Former members of these chapters went on to form two new anti-Muslim groups, G416 Patriots Idaho and Last Chance Patriots.

Jared Bristol, who headed the Norway, Maine, chapter for nine years, quit ACT in 2018 after a series of events — similar to Arthur’s case — led to the national office turning on him. In February 2018, Hatewatch revealed that Bristol’s chapter was lobbying Maine State Rep. Heather Sirocki to introduce a controversial anti-female genital mutilation bill. In emails promoting the bill, Bristol’s electronic signature stated, “Islam is evil.”

ACT Norway’s involvement in the bill garnered statewide media attention and condemnation from Maine Democratic lawmakers. ACT reportedly scolded Bristol. In an email to his chapter, Bristol claimed ACT was trying to “have me muzzled” and “didn’t like” his signature.

As a result, Bristol announced he was leaving the group. “Too timid for me,” he wrote of ACT in his departure email.