The Intelligence Report has obtained a chilling video that Robert Crooks, the leader of the nativist extremist group Mountain Minutemen, recently E-mailed to several other prominent nativist leaders, including Jim Gilchrist, co-founder of the original Minuteman Project. In the E-mail, Crooks suggests that Gilchrist is a weakling who can “Talk the Talk” but not “Walk the Walk."

“This video shows how to keep a ‘Home Depot’ parking lot empty,” Crooks (right) wrote in his sneering July 26 E-mail, titled “Homeland Defence.” Gilchrist, whose organization had earlier provided Crooks' group with supplies, responded by banning Crooks from contact with his own group.

Filmed through a night-vision scope, the four-minute video shows two or three men standing on a hill that appears to be on the Mexican side of the border, beyond a barbed-wire fence. “All right, come on across, motherf------,” a man says off camera in a quiet voice. “Yeah, go that way. I dare you to go that way. That’s my f------ trail, b----!”

Then, after muttering about the distant figures being “cockroaches,” the man shouts out loud, “Hey putos [“f------”], one, two, three!” Next comes the distinct sound of a shotgun shell being chambered, followed by a sudden flash of light and the sound of a shotgun blast. The direction of the gunfire is unclear.

The Mountain Minutemen is one of several armed Minutemen spinoffs now active on the U.S.-Mexico border in the rugged desert between Campo, Calif. and Jacumba, Calif. Crooks has a reputation as a particularly hard-line nativist, and his group is believed to be tiny.

When the camera pans back to the hilltop, the men are gone. “And that’s how you get rid of Mexicans,” the narrator says with a laugh, before concluding with an apology for the shaky camera work. “Sorry folks, it’s kind of hard to shoot a shotgun and a video at the same time.”

In an E-mail to Hatewatch, Crooks (below) said he did not film the video, did not post it to a video-sharing site, and is not the narrator. He did not confirm or deny forwarding it to Gilchrist. 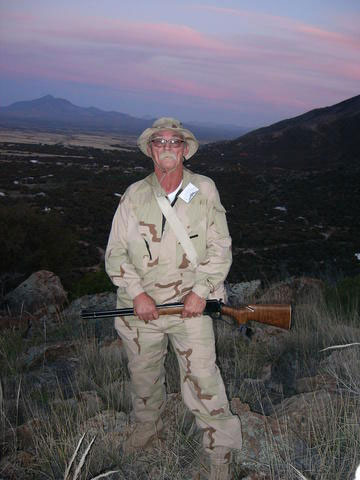