A well-known Mississippi white supremacist is working to exploit the family of Justin Barker, a white teenager allegedly beaten by six black youths in Jena, La., who were later charged with attempted murder. The local authorities’ heavy-handed treatment of the black suspects in the Barker case, compared with others where white teens accused of crimes were handled with leniency, sparked a massive anti-racism rally in Jena last Thursday. The rally drew, by most estimates, at least 20,000 people. 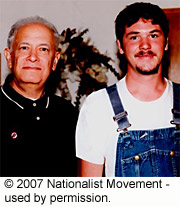 Richard Barrett, leader of the Nationalist Movement hate group, claims on his website to have met with 17-year-old Barker, along with his father David Barker, the night before the rally. Barrett says he got a statement from Justin, complaining that “the ones who attacked me are getting money for beating me up,” which Barrett promptly posted. Justin (pictured, above right, posing with Barrett in a photo now on Barrett’s website) also reportedly expressed gratitude for the encouragement he has received from some people and said he hopes to hear from other supporters.

There is no evidence to suggest that Justin or David Barker had any inkling who Barrett was when he apparently showed up at their door. According to Barrett’s own account, he approached the Barkers to offer support for the family and to try to get more media attention for Justin’s injuries and his version of events.

In fact, in a Barrett posting that purports to be a transcript of a phone conversation between David Barker and Barrett after their meeting, Barker sharply questions Barrett about allegations he has heard from a reporter that Barrett is a “white supremacist.” “I am not a racist and do not want to be called one,” Barker tells Barrett on the phone, as he repeatedly asks Barrett about his racial views. Barrett artfully evades the question, describing himself instead as a patriot, a veteran, a Christian, an American and “pro-majority.”

In reality, Barrett is a longstanding white supremacist. In his 1982 autobiography The Commission — a book he claims to have given Justin Barker at their meeting last Wednesday — he calls for the “resettlement” of blacks, Jews, Latinos and other U.S. citizens in other countries, and also advocates sterilizing the “unfit.” He has led rallies of Klansmen and others and worked alongside some of the most extreme racists in America. In 1988, he hosted a “Warrior Weekend” for racist skinheads at his Learned, Miss., home and used a picture of Martin Luther King Jr. for target practice. More recently, he demanded a pardon for assassin Byron de la Beckwith, who was convicted of the 1963 murder of civil rights activist Medgar Evers. And the list goes on and on.

Before he left the Barker home last week, Barrett says he told the family that he would work to publicize Justin’s story. And, in fact, he showed up at Thursday’s anti-racism rally in Jena to boast to reporters that he had “spent Wednesday night with Justin Barker.” He was wearing a button on his lapel that said “Never.” “‘Never’ meant there should never be civil rights or integration,” Barrett explained to The (Baton Rouge, La.) Advocate. “I’m here to support the man behind the badge and Justin Barker.”