The Social Contract Press, which has been listed as a hate group by the Southern Poverty Law Center since 2001 for publishing articles by white supremacists and promoting the idea that America should be populated by white people, is co-hosting a news conference at the National Press Club today. The topic is “How Many Illegal Aliens are in the United States?” and it will dispute official government data that shows approximately 12 million undocumented immigrants residing in the US.

The Social Contract Press is one of several programs that make up U.S. Inc., a foundation run for decades by John Tanton (right), the architect of much of the modern anti-immigration movement and the co-founder of the country’s largest immigration restriction outfit, the Federation for American Immigration Reform (FAIR). FAIR has its own ties to white supremacists, having accepted more than $1 million from the Pioneer Fund, a hate group that funds controversial studies on race and intelligence.

Tanton has a history of bigotry. Perhaps most famous were the remarks he penned on immigrants in internal 1986 memos to his FAIR colleagues. In them, Tanton questioned the “educability” of Latinos compared to others and wondered whether “those with their pants up [whites] are going to get caught by those with their pants down [Latinos]” in what he characterized as a race to procreate. Tanton’s Social Contract Press also has republished and given a full-throated endorsement to a racist novel called The Camp of the Saints. The book depicts a future invasion of France by starving hordes of Indian emigrants, who are characterized as sexually voracious beasts determined to wreck Western civilization.

Today’s news conference is co-hosted by Californians for Population Stabilization (CAPS), another restrictionist organization that is best known for its board members’ repeated attempts to force the Sierra Club, a major environmental advocacy organization, to adopt an anti-immigration stance. CAPS is headed by Diana Hull, a former professor at Baylor University College of Medicine who is also on FAIR’s national board of advisers. (Tanton is a member of FAIR’s board of directors).

CAPS’ vice president is Ben Zuckerman, a key player in the Sierra Club takeover attempts. Zuckerman, who considers Tanton “a great environmentalist,” led an effort in 1998 to push an anti-immigration resolution through the membership, and then ran in 2004 on an anti-immigration slate for the Sierra Club board of directors. (The Southern Poverty Law Center countered that effort and made public the “hostile takeover” attempt.) Zuckerman and two like-minded allies ultimately went down to defeat in the Sierra Club’s elections by a 10-to-1 margin.

Other speakers at today’s National Press Club event with ties to hate groups include Wayne Lutton, who is a member of the white supremacist Council of Conservative Citizens, a group that has described blacks as a “retrograde species of humanity.” Lutton, who also has an extensive history of making or publishing virulently anti-gay and anti-immigrant statements, edits The Social Contract (published by The Social Contract Press) and works out of Tanton’s offices in Petoskey, Mich.

Lutton is a regular on the racist speaking circuit, having addressed the annual conference of the white supremacist magazine American Renaissance and spoken at several Council of Conservative Citizens conferences. Just this past March, Lutton was at the National Press Club speaking at an event put on by the same publicist organizing today’s news conference — Fran Griffin of Griffin Communications. The March event was held to honor the posthumously published book, Shots Fired, by Sam Francis, a “white nationalist” who was the chief editor for the Council of Conservative Citizens until his death in 2005. (Griffin paid for the publication of Francis’ book.) The “Shots Fired” conference featured a speech by anti-Semite E. Michael Jones that was so rabid that C-SPAN elected to cancel its planned coverage of the event.

Fred Elbel is also scheduled to speak today. Elbel is, in effect, the house webmaster for the anti-immigration movement, having designed the websites of nativist groups including SUSPS (a group that now goes by its acronym only and which specifically aims to change Sierra Club population policy), Protect Arizona Now, the Colorado Alliance for Immigration Reform and several others (Protect Arizona now and the Colorado Alliance have had in their leadership a self-described “white separatist” named Virginia Abernethy, a prominent member of the CCC and onetime close friend of Elbel; Abernethy is at right in the photo of a 1999 CCC conference below, and Wayne Lutton is on the far left). Elbel displayed his temperament during the debate over the Sierra Club’s future in 2004, when he wrote an E-mail that read: “Damned right. I hate ’em all — negroes, wasps, spics, eskimos, jews, honkies, krauts, ruskies, ethopans, pakis, hunkies, pollocks and marxists; there are way too many of them.” Elbel’s Defend Colorado Now, an anti-immigration group based in Lakewood, Colo., has received nearly $50,000 from Tanton’s U.S. Inc. 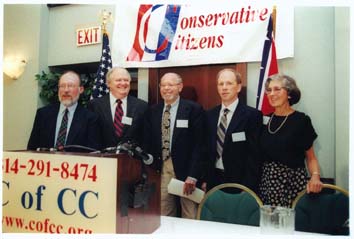 Even speaker James H. Walsh, a former associate general counsel for the U.S. Immigration and Naturalization Service, seems familiar with extremist ideas. In a January column for the right-wing website NewsMax.com, Walsh warned readers about the nefarious motives Jews have for favoring increased immigration to the United States. His source was anti-Semitic professor Kevin MacDonald, a favorite in neo-Nazi and white supremacist circles thanks to his three volumes on “the Jews.” MacDonald’s trilogy argues that Jews are compelled by a group evolutionary strategy to push for liberal policies, like immigration and diversity, with the intent of undermining the power of the majority — in America, white people — that rules them.

Philip J. Romero, dean of the University of Oregon’s Lunquist College of Business, also is attending the news conference. Romero just published an analysis, “Racing Backwards — The Fiscal Impact of Illegal Immigration in California, Revisited,” in the Summer 2007 edition of The Social Contract.