Last month the Christian Council of Britain (CCB), a religion-based front group for the whites-only British National Party, began hosting a series of “public debates on morality and family values.” 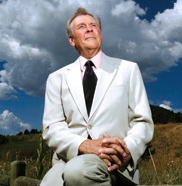 The keynote speaker at the inaugural CCB conference in London was none other than Dr. Paul Cameron, the infamous anti-gay crackpot psychologist based in Colorado Springs, Colo. Under the guise of the Family Research Institute, his one-man statistical chop shop, Cameron churns out reams of pseudo-scientific “studies” invariably concluding that homosexuals are menaces to society.

Cameron’s Oct. 26 lecture in London focused on his oft repeated, though thoroughly discredited “findings” that homosexuals are more likely to rape and murder children than are heterosexuals. “For some reason homosexuals’ involvement in this horrid crime is especially high in Britain,” Cameron said.

Cameron used his appearance at the Christian Council of Britain event to promote a new Family Research Institute study based on “668 stories about the rape and murder of children in the major newspapers in the USA, Australia, Great Britain, Canada, etc.” The study concludes that 49% of British perpetrators were homosexual, versus an average of 28% in other Western countries.

This new study is similar in its deeply flawed methodology to Cameron’s infamous 1983 study claiming that homosexuals are “10-20 times more likely than heterosexuals to molest children,” a figure that is still frequently appears in anti-gay propaganda

A thorough debunking of Cameron’s various studies is available here.

Cameron based that finding on a 1978 study by Nicholas Groth, the highly respected director of the Sex Offender Program at the Connecticut Department of Corrections. Groth had interviewed 175 convicted child molesters and found that more of them had molested boys than girls. Cameron's statistic is derived from the false assumption that men who molest boys are gay, despite the fact that Groth's original study found that none of the men identified himself as homosexual. Instead, the pedophiles were either heterosexual outside of their criminal behavior or were what Groth termed "fixated pedophiles with no interest in sex with adults."

Groth was outraged and filed a formal complaint with the American Psychological Association that led to Cameron losing his professional accreditation. "Dr. Cameron misrepresents my findings and distorts them to advance his homophobic views," Groth wrote the APA. "He disgraces his profession."