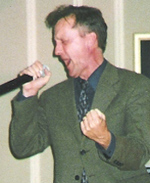 McCain, who was once a member of the neo-Confederate hate group League of the South, often filled these briefs with items from hate sites. A foe of interracial marriage, McCain regularly quoted neo-Confederate activists favorably in his stories. In 2005, stories freelanced by McCain to the website of the conservative newspaper Human Events were scrubbed after that publication’s editor, Thomas Winter, was given information by the Southern Poverty Law Center’s Intelligence Report about McCain’s racism.

This Tuesday, Hatewatch contacted McCain for comment about the managerial changes at the Times. McCain, who then seemed upbeat, told Hatewatch that he felt that newly named executive editor John Solomon was a “stand-up guy.” McCain added, “Of course, the newsroom was shocked by the back-to-back announcements that both Wes Pruden and Fran Coombs were leaving,” and called both men “excellent newspapermen.” He especially praised Coombs — who has his own history of ties to white supremacy — for being “the cog that turned the wheel, the straw that stirred the drink” at the Times.

But, apparently, the changes proved to be too much. In his Wednesday resignation letter, which was posted to his personal blog, McCain writes that with the exit of Pruden and Coombs, “I suppose now is as good a time as any for me to go.”