Hollywood writers may be on strike but the characters in front of the LaSalle Parish Courthouse in Jena, La., on Monday, Martin Luther King Jr. Day, were straight out of Central Casting. Klansmen and other white supremacists wore nooses, toted weapons and chanted, “If it ain’t white, it ain’t right.” Beret- and sunglasses-wearing members of the New Black Panther Party marched in military formation and faced off with police. And a loose leftist confederation — so-called Black Bloc anarchists, anti-racist skinheads, African-American activists and college students from Chicago and Houston, to name just a few — shouted, “KKK go away,” middle fingers thrust upward into the air. 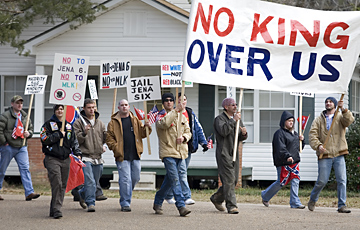 The Nationalist Party, a small, Mississippi-based white supremacist group headed by attorney Richard Barrett, organized the Jan. 21 event to deride the legacy of King and protest against the six black Jena teenagers charged with beating a white classmate. Barrett started hyping the “Jena Justice Day to Empower the Majority” event not long after a massive march in support of the “Jena 6” overwhelmed the small town last Sept. 20, sparking a widespread white supremacist backlash.

The Nationalist Party’s subsequent and ultimately successful legal battle with Jena officials over whether the racist group would have to post a $10,000 security bond and agree not to carry firearms received widespread media coverage, as did Barrett’s exhortations for white supremacists to show up armed with guns and nooses.

Barrett abruptly rescinded his call for guns and nooses the day before the march, after reaching an out-of-court agreement with the city, which agreed that its conditions were unconstitutional. Still, some of the racists couldn’t resist. One member of the Nationalist Party used a noose as a leash for walking his dog. David Dupre of Tioga, La., displayed a .22-caliber revolver in the left-breast pocket of his military fatigue jacket, and a noose dangled off a knife strapped to his right leg. His son David Jr., meanwhile, entertained questions on the presidential race. Asked by the Intelligence Report what he thought would happen if Sen. Barack Obama (D-Ill.) were elected, the younger Dupre didn’t hesitate. “He’d catch a bullet. He’d get picked off before he’d even take the oath” because “he’s tied to the Arabs and the Muslims” and “Saddam Hussein wants him in office.” Both father and son were armed with “street sweeper” shotguns until Jena Police Chief Paul Smith told them he wouldn’t allow them to march unless they left the 12-gauge weapons in their vehicle, according to The Associated Press.

At noon, Richard Barrett set off marching with nearly 30 white nationalists to Jena High School before looping back through the center of Jena. His followers waved Confederate battle flags, a pennant that read “White Power Ku Klux Klan,” and signs shouting “No MLK Day!” and “No King Over Us.”

As the racists re-entered the courthouse grounds, about a dozen New Black Panther Party members rushed to meet them but were forced back by Louisiana State Police. One of the Panthers, William Winchester Jr. of New Orleans, was charged with battery of a police officer and resisting arrest.

Then the rally began. Barrett proudly narrated the story of the Nationalist Party’s first meeting in a chicken coop in Forsythe County, Ga. Bellowing as if he were speaking to a crowd of thousands, Barrett asked, “Is it going to be the piney woods of Jena or the crack houses of Detroit?” Next, a young Klan member named Michael Brown read a 12-point white separatist manifesto, including, “We’re here just supporting our white brothers,” and, “We’re proud to be white.”

Self-proclaimed “white leftist” and racial eugenicist James Hart of Tennessee then took the stage. He said true justice would see “David Duke in the White House … Simon Wiesenthal in jail for fraud … and Oprah Winfrey scrubbing a floor.” Hart cackled wildly at his own punchlines, appearing at times to annoy his own racist brethren, who failed to share his mirth even when Hart ranted, “The biggest fraud of all time is not the Jena Six but the Auschwitz 6 million. … Perhaps Hollywood found the evidence for gas chambers in the same place they found evidence for racial equality, Darth Vader and the Death Star – on the back lot at Warner Bros.”

The crowd of anti-racist demonstrators — who outnumbered the racists at least three-to-one — included a bearded white man wheeling around a 15-foot-high cross inscribed with a scripture from the Book of Romans: “There is no difference between the Jew and the Greek.” A black man wore a hooded sweatshirt with “KKK vs. KKK” airbrushed on the back, explaining somewhat cryptically that his slogan represented how the Klan in the 1960s targeted King and the two Kennedy brothers.

Meanwhile, actual Jena residents — a tiny minority on the tense streets — harrumphed at another shameful moment for their hometown.

“I think people here are tired of all of this,” LaSalle Parish sheriff-elect Scott Franklin told The Associated Press. “And it's a shame for this to happen on this day especially. But hopefully this will be the end of it. Both sides have had their say now.”

(Casey Sanchez contributed to this report.)