This Monday, Feb. 18, 52-year-old white supremacist James “Yankee Jim” Leshkevich sat before his computer screen and typed these words: “This will be the last post on [Leshkevich’s blog] The Hudson Valley Freeman for a while. I’m just too depressed over all this to continue. Hopefully that will change in the future.” 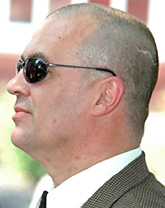 The following morning, police in West Hurley, N.Y., found Leshkevich’s body hanging in a garage attached to the home he shared with his 55-year-old wife Deborah, who was found beaten and strangled to death in the couple’s bedroom, the victim of an apparent murder-suicide.

Leshkevich, a prolific white supremacist blogger, letter-to-the-editor writer and radio host, detailed what was apparently his motive in a rambling blog post spread over 10 days. Beginning Feb. 8, the post was titled, “I Caught My Wife Sleeping With Another Man...”

“We continued to talk, and my wife started screaming, started walking towards the phone, said she wanted an order of protection, and threatened to call 911 ... for no reason at all, other than she was getting very uncomfortable answering my questions about getting caught red-handed in bed with the ‘nice man,’” Leshkevich wrote Feb. 14 after complaining that his wife hadn’t given him a Valentine’s Day card. “I probably would’ve still been rotting away in the Ulster County Jail had she called!”

A country music singer, chronically unemployed truck driver and longtime white supremacist, Leshkevich joined the neo-Nazi group National Alliance in 2000 and attended the Aryan Nations World Congress in 2002. He quit the National Alliance in March 2005 along with many other rank-and-file members during a leadership corruption scandal but remained a deeply dedicated racist.

A frequent call-in guest on an Internet radio show hosted by neo-Nazi Hal Turner — who was revealed to be an FBI informant earlier this year — Leshkevich was perhaps best known in recent years for helping Turner organize a neo-Nazi rally outside a high school in Kingston, N.Y., in 2005.

Leshkevich was banned from the white nationalist online forum Stormfront for, as Stormfront leader Don Black put it the day after Leshkevich apparently killed his wife and then himself, “refusing to stop promoting Hal Turner’s various events calling for assassinations of government officials and other homicides.”

“He knew our policy, but kept doing it, despite warnings by moderators who liked him,” Black wrote. “I think that personality trait may be related to his end.”