Last Friday, the 30-year-old son of Frazier Glenn Miller — a white supremacist icon of the 1980s who went to prison for defying court orders to shut down his paramilitary White Patriot Party — was shot to death by a Marionville, Mo., police officer who he’d just wounded with a shotgun blast.

Authorities were still investigating the bizarre events surrounding Jesse Miller’s death today. But initial reports indicated that Miller, driving an SUV, had an accident with a pickup truck on the afternoon of Friday, March 28. Shortly after the crash, Joseph M. Rich, 55, stopped to offer to help Miller — who, for reasons that are still unknown, responded by killing him with a shotgun he had in his vehicle. Moments later, officer Andy Clark arrived and ordered Miller to put down the weapon. Instead, Miller shot Clark, who then managed to shoot Miller dead. 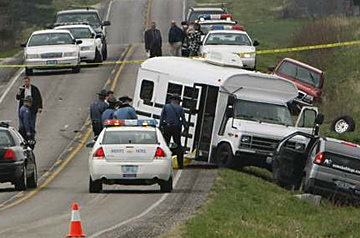 The officer, wounded in the shoulder, was conscious when taken to the hospital a short time later. Officials said his injuries were not life threatening.

Rich, the Good Samaritan, was not so lucky. Friends and relatives this week were mourning the memory of the man widely known as “Big Mike,” a tattoo artist who was driving a small school bus that he’d converted to a mobile tattoo parlor. Friends said that in addition to working at a Marionville parlor, Rich was known for traveling the country to sell his tattoos at motorcycle rallies.

Glenn Miller, now 67, led a North Carolina group in the 1980s that was called the Carolina Knights of the Ku Klux Klan but later morphed into the White Patriot Party, which was notorious for its paramilitary training and formations. He went on the lam in 1986 after mailing a letter to 5,000 people calling for “total war” on federal agents, blacks and Jews. At the time, he had also violated a court order, stemming from a lawsuit filed by the Southern Poverty Law Center, that prohibited him from continuing to operate a paramilitary group. He was finally captured in Ozark, Mo., after authorities tear-gassed him from a mobile home.

In the end, Miller only served three years in prison, thanks to his testimony against 14 leading white supremacists in a 1988 federal sedition trial in Arkansas. Widely reviled as a traitor to the cause, he initially laid low and drove a truck.

But in 1999 he published his self-serving autobiography, A White Man Speaks Out. He began to post messages in white supremacist Web forums. In 2002, he moved to Aurora, Ill., and by 2005 he began printing a racist tabloid that came to be known as The Aryan Alternative. He has been supported by neo-Nazi webmaster Alex Linder, whose Vanguard News Network carried comments Sunday describing Jesse Miller as “a fine White warrior.” But most other white supremacist activists in recent years have seemed to agree with an Internet posting that went up several years ago next to Glenn Miller’s photograph: “Warning: Federal Informant, White Race Traitor.”